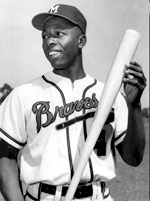 The ejection of Orlando Hernandez from Saturday’s game was a reminder of one more reason that Hank Aaron should always be remembered as the true all-time homerun king of North America, rather than the future convict currently strutting around San Francisco.

El Duque was tossed, without warning, because the home plate umpire felt that Hernandez had purposely thrown at the batter. That judgment was ludicrous, but is not what will be argued here. Rather, the root problem is that fact that the umpire had the authority to make such a judgment, and thereby change the course of the game from that point forward. No longer would it be a Major League Baseball Game; rather, it would be a modified version of The Real Thing.