Break up the Mets !

The Marlins held Jose Reyes, Carlos Delgado, and Orlando Hernadez to just one hit each. Unfortunately for the fish, everyone else in the lineup had more than one knock.

Reyes’ only hit was a triple, and he walked twice and scored two runs. Delgado’s one hit was a double smashed down the first base line that drove in a run.

And then there was Carlos Beltran.

Beltran went 4-6 with 2 runs, 2 RBI, 2 doubles, and a homerun. Shawn Green also pounded two doubles — to the opposite field — and both Jose Valentin and Ramon Castro hit homeruns. Moises Alou did not get an extra-base hit, but did go 2-4 for the second straight game, scoring once and driving in one. David Wright had the most uninteresting day, but he did manage to extend his hitting streak to 26 games (or 14, depending on how you’re counting). Even El Duque lashed a groundball single through the right side.

Ah yes, El Duque. Working without his great stuff, he struck out 10 and allowed only four hits in seven strong innings of work. Hernandez did not have his best curveball, but it didn’t matter. When you have a substantial lead in the second inning, all you need to do is throw strikes.

The first two innings, the Marlins were sitting on his curveball, which from the side was flat. He threw all pitches almost exclusively from the side in innings one through three, perhaps because of the righty-heavy lineup, with the bulk being breaking pitches. However, once he had a six-run lead, he threw many more fastballs, occasionally mixing in overhand fastballs, change-ups, and curves. When the Fish sat on the curve, he gave them the fastball. Once they were accustomed to the sidearm slot, he came overhand. His array of angles and changes in speeds kept the Marlins bats in check — they appeared to give up mentally after the fourth inning. There is one pitch that is becoming predictable from Hernandez — the 3-2 eephus pitch. He’s thrown that slow curve nearly every time he’s had a full count this year.

All in all a fine game by the New York Mets, who have moved into first place thanks to a loss by the Braves to the Cubs. Oh, and look at that — the Braves come to Shea for a weekend series. The timing could not be more perfect.

In addition to blasting two opposite-field doubles — that were nearly homers — Shawn Green lost his cap running for a fly ball for the first time this year.

Amby Burgos was throwing some nasty moving fastballs, firing them into the upper 90s. He struck out two in his one nearly perfect inning, the only stain being a hit batter.

The Mets put Mike Pelfrey on the mound to face Tim Hudson, who is on fire so far this year, sporting a 2-0 record and 0.86 ERA. Pelfrey is making only his second start of the season. Game time is 7:10 PM. 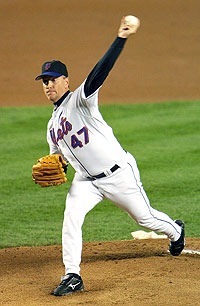 All the brouhaha over the Mets’ supposed lack of starting pitching has been silenced in the first dozen games of the year. Sure, it’s barely 1/14th of the way into the schedule, and we’re facing around 30 more starts per rotation spot right now, but so far, so good.

Everything begins with Tom Glavine, who had a stupendous spring and has remained a stalwart through his first three starts of the season. What is most encouraging about Glavine’s quick start is that he did not have his best stuff in two of the victories — suggesting that his best performances have yet to come. The windy weather has wreaked havoc with the flight of his change-up, and the icy cold climate has to be negatively affecting his feel for the ball. Glavine’s success depends primarly on his ability to grip the baseball and apply finger pressure to specific parts of the ball — trying to accomplish this with freezing, numb fingers is difficult at best. As the weather warms, expect Glavine to pitch more effectively in his march toward win #300 — which I think will happen before the All-Star break.

Similarly, John Maine may improve as the season — and weather — heats up. Maine threw an outstanding game in his first start of the year against the Cardinals, then was bounced around in the Mets Home Opener at Shea. In his most recent start against the Marlins — in Florida — he looked very much like the guy who shut down the Cardinals in game three. Could his problems in his second start be blamed on the cold, wet, windy conditions in New York that day? The outing in Florida suggest that could be the case. He is no longer the “one-pitch pitcher” of 2006; Maine has an impressive array of off-speed stuff and, just as important, a more confident mindset. Should he continue to dominate two out of every three of his starts, he’ll be a 20-game winner.

Another starter who likes warm weather is Cuban-born Orlando Hernandez. El Duque — like Maine — has thrown two great games and one bad game. His two gems were in St. Louis and Atlanta, the one to forget in Washington D.C. With El Duque, though, it’s not necessarily the weather, but rather, how his curveballs are breaking. At his age (37? 40? 43? 52?), he’s not blowing the ball by anyone, and his fastball doesn’t sink enough to get lots of ground balls. He’s primarily a pitcher relying on flyballs and swings and misses for outs, which can be a dangerous cocktail when the curveball is hanging. If his curve is breaking sharply, El Duque could pitch a shutout; if it’s not, it could be a massacre. As witnessed in the game against the AAA Nationals, the skill level of the opponent is of no consequence when Hernandez is “off”. Unlike Tom Glavine, who can still find a way to win without his best stuff, El Duque is remarkably vulnerable without the knee-quivering deuce. At the same time, when El Duque is “on”, he can beat anyone.

Along the same lines, the eternal enigma known as Oliver Perez could be the first Mets pitcher to throw a no-hitter — but also be the first Mets pitcher to give up ten runs in one inning the next time out. He is a real-life Nuke LaLoosh or a younger version of El Duque: when he’s on, no one can beat him. When he’s not on, however, who knows what might happen. The Mets are gambling that he’ll be on more times than he’s off — as they are with Hernandez — and if they’re right, they should get somewhere between 20-25 wins between Perez and El Duque.

The wildcard in the rotation, of course, is Mike Pelfrey. He had a fairly good first outing against a weak Nationals lineup, pitching 5 2/3 innings and getting nine ground balls and allowing only 2 runs, but he gave up six hits and walked four in the process. A better test of his mettle comes this Friday against a much stronger Braves lineup. By mid-May, the Mets might find out that Pelfrey isn’t yet ready for big league competition — or he could emerge as the Justin Verlander of 2007. Luckily, the Mets have enough depth to guard against the former.

That’s where the Mets rise above the competition: starting pitching depth. While everyone raves about the bats in their lineup, it will be the surplus of arms that carry the Mets through the grueling 162-game season. Looking down on the farm, the Mets have longtime veteran Chan Ho Park to bring up as needed — a luxury many teams would like to have right now. In addition, Jorge Sosa has been impressive, sporting a 2-0 record and 0.95 ERA. Philip Humber — who may one day join Pelfrey to become the best young Mets duo since Seaver-Koosman — has had two strong starts and struck out 14 in 14 innings. He could be ready to make an impact in the bigs sometime this year. Lost in all the excitement surrounding Humber is Jason Vargas, who also is 2-0 with 14 Ks in 18 innings, a 1.50 ERA and a nifty 1.00 WHIP. Vargas is only a year removed from being in the starting rotation of the Florida Marlins, and at age 24 still has plenty of time to resurface. Jason Vargas could easily sneak into the Mets rotation and become a force, much in the way John Maine did in 2006.

With Aaron Sele available for spot starting, and Park, Sosa, Humber, and Vargas down in AAA, the Mets have plenty of viable options should Pelfrey falter, Perez implode, or someone become injured. Few other teams in MLB are this prepared to face the inevitable (the only one that comes to mind is the Twins, who have Matt Garza and Scott Baker nipping at the heels of the current Minnesota starters), as it is almost guaranteed that a starting rotation will lose at least one or two of their starters at some point in the season. In fact, looking around the Majors, it’s tough to find a rotation that is currently intact. One only needs to look crosstown to see the Yankees, who have lost half of their rotation and counting on people named Darrell Rasner and Chase Wright as their third and fourth starters. The World Champion Cardinals have lost their ace Chris Carpenter — a huge blow considering that their rotation already consisted of former relievers Braden Looper and Adam Wainwright. In the NL East, the first-place Braves have lost Mike Hampton for the year, the Marlins have three starters on the DL, the Phillies have moved their ace Brett Myers to the bullpen, and the Nationals are, well, the Nationals. At this early point in the season, the Mets may not have the best-skilled starters, but they certainly have the healthiest.

As mentioned before, it’s still early in the season. There’s little doubt that someone will falter, or become injured, and thereby kink the current plans. However, Omar Minaya did a great job of stockpiling starting pitching talent (wasn’t his offseason graded an “F” by some pundits?), so the Mets are fully prepared to counter the injuries and the implosions.

In other words, 2007 is clearly not LimaTime.