It was too much to ask of Mike Pelfrey.

Pelfrey had a tough time, allowing 6 hits, 2 walks, and 4 runs in only 5 innings of work. He was clearly missing two vital tools: confidence and command. After giving up a first-inning homerun to Chipper Jones, Pelfrey turned a whiter shade of pale, and worked both Jones boys way too carefully (you can’t blame him, they are among the most dangerous hitters in the NL). Against the rest of the Atlanta lineup, Pelfrey was only mediocre, struggling with his command and lacking weapons other than an occasional, good sinking fastball.

Announcer and former sinkerball specialist Ron Darling suggested that Pelfrey — with about ten days’ rest — may have been too strong, the reasoning being that a sinkerballer benefits from slight fatigue (the arm slows down, and thus the ball slows down and dies in the strike zone). However, Pelfrey’s problems go beyond a too-strong sinker; he doesn’t have anything else to throw. His change-up shows promise but is erratic — sometimes it’s too fast, sometimes it’s too high; too often it’s both. His slider also has potential, particularly when he spots it appropriately (down and away, out of the strike zone). However, because the changeup is inconsistent, he tries to throw the slider for strikes, leaving it flat and up — not a good combination. I’d like to believe that Pelfrey’s lack of sharpness was due to the lengthy rest period, but he showed similar issues against the Nationals, and I suspect he simply is not ready. There’s no question that one day, Mike Pelfrey will be a standout pitcher — with that 95+ MPH running down at the knees, he can’t fail. But, he really needs to further develop the secondary pitches to get big league hitters out.

On the other hand, Tim Hudson was the exact opposite of Pelfrey, exhibiting an array of excellent pitches and exuding confidence. He had every pitch working — the sinking fastball, the split-finger, and the slider. He threw a “pitcher’s pitch” on nearly every pitch — even on 3-0 counts — and when he didn’t have the Mets chasing his splitfinger in the dirt, he had them pounding the sinker into the ground. Every time the Mets put a runner or two on base, the next batter would ground into a double play. It was that kind of night for Hudson — where everything went right. The only Mets to hit Hudson hard were Moises Alou, who had two hits for the third straight night, and Shawn Green, who had the only other Mets hit off Hudson. Green lashed a bullet of a grounder up the middle in the seventh that might have been his second hit, but Edgar Renteria was playing him perfectly and turned it into a harmless double-play in the seventh inning.

The previously nearly perfect Mets bullpen finally showed vulnerability, as Pedro Feliciano walked in a run and Amby Burgos followed his lead by walking in another and allowing yet another to score on a wild pitch in an ugly seventh inning. However, the bullpen was bound to break eventually, and better it come in a game like this — which seemed impossible to win once Hudson got going — than in a tighter contest. After the awful seventh, Scott Schoeneweis and Joe Smith came on to pitch a perfect inning each to close out the game.

Carlos Beltran nearly hit an inside-the-park homerun in the bottom of the ninth, but was held up at third with the Mets down by 7. He might have scored on a medium fly ball to right by Carlos Delgado, but with Francoeur’s arm it didn’t make sense to try scoring because, again, they were down by seven. He did eventually score, spoiling the shutout, on a double play grounder to short that Kelly Johnson air-mailed into the third row behind first base.

Shawn Green did his part to extend the lead, blasting a line drive, two-run homerun into the right field stands off Braves reliever Rafael Soriano. It was the first Mets homerun at Shea in 2007.

David Wright’s 14 / 26-game hitting streak came to halt. He did walk once, in the ninth, and the fans heartily booed Soriano for not giving Wright a decent pitch to hit.

Every time I saw the Braves third-base coach Brian Snitker, my mind had a moment of dyslexia and made me think it said “Stinker” on the back of his jersey — offering the only chuckles of the game.

Saturday afternoon is Dog Day at Shea, and you can meet me, my wife, and my dog in the picnic area if you go to the game. Oliver Perez will face Chuck James in a battle of slot machines. Game time is 1:10 PM. 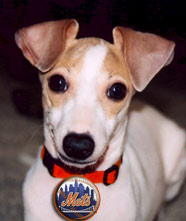 Saturday afternoon’s game against the Atlanta Braves is “Dog Day at Shea”.

No, it doesn’t mean Jose Lima will be pitching and Bobby Bonilla playing third base.

Rather, it is an opportunity for your best friend to join you at Shea Stadium to watch the New York Mets. It only happens once or twice a year, and is barely advertised, so take advantage while you can.

Dogs and their owners will have the opportunity to parade around the Shea Stadium outfield prior to the game (at 12:40PM). It’s BYOPS – Bring Your Own Pooper Scooper. This is the third year of the promotion, with last year’s event attracting over 700 dogs.

Those coming to the game without their pup have no fear of stepping in doggy-doo — the dogs are relegated to the picnic area and not allowed in the regular seating areas of the stadium. 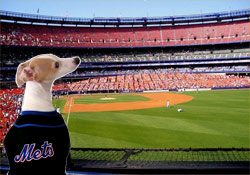 If you are interested in meeting me, go to the picnic area and look for the only person in the stadium wearing a #42 Mo Vaughn jersey. I’ll be with my lovely wife and our Italian Greyhound, Lola.

In addition to the link above you can call the Mets group sales ticket department at 718-507-TIXX for tickets and questions.

The Mets send Mike Pelfrey to the mound tonight to face red-hot Tim Hudson and the Atlanta Braves at Shea Stadium.

After last night’s win against the Florida Marlins, the Mets find themselves in first place, a scant 1/2 game ahead of the 10-5 Braves. While it’s hardly a “make or break” series, this weekend will nonetheless be an ideal opportunity for one of the two teams to emerge as the frontrunner.

The Mets nearly pulled out two wins in their initial series with the Braves in Atlanta, but lost a 3-2 heartbreaker in the at Turner Field on April 8th. Aaron Heilman gave up three doubles in the 8th inning, wasting a gem of an effort by Orlando Hernandez, and allowed the Braves to propel into sole possession of first place for the first time since April 2006. It’s taken the Mets nearly two weeks to regain NL East leadership, but the Braves can climb back ahead with a win tonight.

With the new and improved Tim Hudson on the hill, the Braves have their best chance of the weekend to beat the Mets. Hudson was re-motivated over the winter, and dedicated himself to a rigorous training regimen. So far, the hard work has paid off, as Hudson has allowed only 2 earned runs in 21 innings of work — helping him to a perfect 2-0 record in three starts. On paper, Hudson’s 0.86 ERA and 0.95 WHIP seem daunting, and a difficult challenge for second-year pitcher Mike Pelfrey to overcome.

However, Hudson can’t possibly continue to pitch as well as he has, can he? Eventually, the dam must break, and why not against the most powerful lineup in the National League?

How the Mets batters plan to approach this game should be interesting, since their main strategy thus far has been to take pitches and get into deep counts. Against Hudson, who throws a lot of strikes, that could make things difficult — you don’t want your batters falling behind 0-1 or 0-2. Though, the Mets did employ a more aggressive approach against strike-machine Dontrelle Willis two nights ago, and that produced favorable results. As always, the offensive tone will be set by Jose Reyes in the first inning. If he gets on base and scores in innning one, the Mets will have a good chance to take the game. Getting runs against Hudson early is the key to beating him, because the more he cruises, the more he beats batter mentally.

Before Reyes gets to bat, however, Mike Pelfrey needs to set the tone in the top half of the inning. This is a huge test for Pelfrey, and could give the Mets a good indication of what he’ll provide over the course of the 2007 season. First of all, Pelfrey will give us a clue as to how he handles perceived “pressure” as the game is against the Mets’ top NL rival (sorry Jimmy Rollins!), and the result will decide who is in first place. Secondly, this will be Pelfrey’s first regular-season outing against a strong offensive team (his previous start came against the feeble Nationals). How will he respond to the test? Will he crumble under the bright lights at Shea? Will he keep his cool? Will his nasty sinker and average off-speed stuff be enough to retire the better hitters in the NL? We’ll find out tonight.

Tomorrow afternoon’s game is Dog Day at Shea, and Oliver “The Human Slot Machine” Perez goes against the equally unpredictable Chuck James. This is the game the Mets have to take, as Friday will be tough against Hudson and Sunday’s matchup has the impenetrable John Smoltz vs. Tom Glavine in their second matchup of the year. Yes, Smoltz is beatable, and Glavine is on a roll. But I’d feel a lot more comfortable putting the pressure on smug-faced Smoltzie to stop a three-game losing streak than watch him ride behind the momentum of a win.

To win Saturday’s game, the Mets need to take advantage of high fastballs Chuck James likes to offer, and get into the weak Braves bullpen early (Mike Gonzalez is likely unavailable with a tender elbow). As pointed out by Alex Nelson on Metsgeek, James is essentially a fly-ball pitcher. Unlucky for him, he’s about to face a lineup of fly-ball hitters who have just started pounding the ball recently. This molotov cocktail of a mixture could result in another high-scoring game for the Mets — assuming they don’t get too thrown off by Hudson’s sinkers on Friday and the sunny brightness of the afternoon start. More importantly, Oliver Perez must completely shake off his last disaster of a start, find that mysterious arm slot of effectiveness, and put together at least five innings of mediocre pitching. The entire Mets bullpen is on about ten days’ rest, so they can take it from there — assuming, of course, that Pelfrey doesn’t have a meltdown in the first few innings of his start.

With too many unknowns at play, I’m not making any predictions. In any case, it should be an exciting weekend of baseball. Let the games begin! 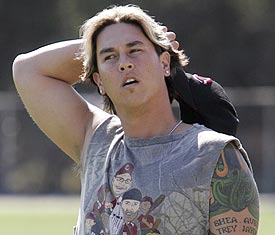