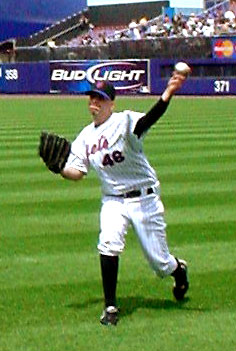 While most of the 55,143 fans at Shea were there for the free luggage tags, a few of us were there to see the Mets and Braves battle it out for first place. On a beautiful 80-degree afternoon, Mets fans and several hundred dogs were not disappointed, because …

Ollie was ON today.

After walking 7 batters in two innings in his last disaster of a start, Oliver Perez came back to Shea to hold the Braves to two earned runs in six and two-thirds innings, striking out 9 and walking none. Maybe he needs ten days of rest between starts.

Perez was remarkably efficient, throwing 98 pitches in nearly 7 innings of work, and had a few very quick innings — for example a 7-pitch second, and several half-innings that were over before you could find the rest room. and . For a while, it seemed that everything he threw was a strike, or nearly a strike; in fact, there was a stint from the first to third inning that he threw 20 consecutive strikes. All told, he threw 72 strikes out of 98 total pitches. If only Rick Peterson can figure out a way to keep this Perez outing bottled up for use every five days,

Aside from the excitement surrounding the luggage tags, dog day, and Oliver Perez, the Mets also had a fine day with the bats, pounding lefty Chuck James for 10 hits and 6 runs in 5 innings of work. Included in the onslaught were three homeruns, by Ramon Castro, Jose Reyes, and Damion Easley. It could have been even worse, had Shawn Green swung at a meatball 3-0 pitch with the bases loaded in the first.

The two best individual efforts of the day came from — you guessed it — Jose Reyes and Carlos Beltran. Reyes had his typical 3-5 day at the office, with 2 runs scored, an RBI, and a stolen base. Beltran nearly hit for the cycle, going 4-5 with 2 runs and 2 RBI (he hit two singles, a double, and a triple).

Scott Schoeneweis failed in his LOOGY role, walking Chipper Jones on seven pitches in the seventh inning. However, Mighty Joe Smith came on to strike out Andruw Jones on four pitches. Gotta love that guy. Aaron Heilman had a long eighth inning, throwing 20 pitches — 15 for strikes — but only gave up one hit and no runs. Billy Wagner gave up a walk in the ninth but otherwise finished the game without consequence.

David Wright hit in the second spot in the order for the first time today, but had no impact. He’s swinging the bat poorly lately, with a lot of swings and misses. He seems to be behind on pitches, so he’s either not seeing the ball or letting the ball get TOO deep. He has great fundamentals, but I think he goes overboard with the Derek Jeter approach of inside-outing every pitch. It’s great to let the ball get deep, but Wright needs to sometimes look middle-in and throw the bat-head out on those type of pitches. He might be thinking too much. 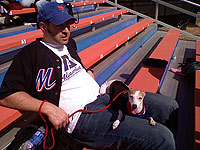 Dog Day at Shea drew several hundred dogs, all of which were perfectly behaved in the picnic area and bleachers beyond the centerfield fence. The highlight of the day came 20 minutes before the game, when all dogs and their owners paraded around the field. Braves catcher Brian McCann in particular was intrigued by the parade, as he pet a few dogs as they walked by him in the outfield.

In between innings, a few boys called out to centerfielder Carlos Beltran and asked “Do you like Chipper Jones?” Beltran turned around, smirked, jutted out his throwing hand and tilted it back and forth as if to say “so-so”. Very cool, ‘Los — he’s obviously completely warmed up the the Shea faithful.

The rubber match pits former teammates Tom Glavine and John Smoltz for the second time this season. Hopefully the end result will be better than last time, and methinks that Glavine will benefit from the warm weather. Unfortunately, Smoltz will likely benefit from the increased temperature as well. In any case, it should be a classic battle. Game time is 1:10 PM, and will be shown on CW 11.