Pretend it is the top of the third inning, there are two outs, and there is a 1-2 count on the opposing pitcher.

How would you guess the inning would turn out?

If you guessed five runs scored on two walks and four hits, you’d be right.

Mets announcer Gary Cohen insinuated (several times) that Chan Ho Park was the victim of poor Mets defense. While it’s true that a line drive popped out of Damion Easley’s glove, and two perfectly-placed pop flies eluded the Mets middle infielders and outfielders, you can’t ignore the fact that Park walked two batters to load the bases for the Marlins’ best RBI man Miguel Cabrera. And you can’t expect the wind-blow flies to safely drop into Mets’ leather.

Normally I enjoy Gary Cohen’s banter, but it’s irritating to hear judgmental criticism of the defensive plays from a guy who’s never been on a field above Little League. It’s easy to say a defender should have caught a ball from the comfort of the broadcast booth — quite another when you have actually been on a baseball field, and have had to deal with Major League popups hit into the lights and pushed around by the wind. Keith Hernandez was tellingly quiet in response to Cohen’s opinion on balls that “should have been caught” — and he is usually much more critical of defensive shortcomings.

As if the debacle of the third inning weren’t bad enough, light-hitting Alfredo Amezaga hit a monster solo shot over the rightfield fence in the fourth. Hanley Ramirez did the same thing two batters later to make the game 7-zip.

The Mets didn’t score until the fifth inning, when Carlos Beltran hit another solo homer from the right side. They scored three more in the sixth to chase starter Scott Olsen, and scratched out another two in the 8th, but never really put together enough of a rally to threaten the Marlins’ lead.

After this start, comparisons of Chan Ho Park to Jose Lima are not completely out of line. It would just be the Mets’ dumb luck that their worst AAA pitcher would be due for a start on the day they needed a replacement. My guess is we’ll see Jorge Sosa or Jason Vargas the next time El Duque’s spot in the rotation comes up.

Kind of scary to be Chan Ho Park, and honestly believe you belong in MLB.

One of the bright spots in the game was Carlos Beltran, who is suddenly hot — especially from the right side. Beltran had four hits including a solo homerun.

Shawn Green extended his hitting streak to eight games by ripping a two-run single in the sixth.

Moises Alou has cooled off substantially over the last few days, but worse, he’s become a double-play machine. His recent rally-killing, easy-bouncing grounders to shortstop are reminiscent of Mike Piazza in his DP prime.

How many hard line drives does Carlos Delgado have to hit into short rightfield for outs before he starts dropping bunts? This is getting downright stupid, and I don’t care how much money Delgado is making — if the infielders are going to play in excess of 120 feet away, he MUST start using the bunt. He did it once, and with some practice, he can do it again. For the short term, it will get him some easy singles, and over the long term, it will discourage teams from using the shift.

As much as we’d like to believe Jose Reyes is the best, young, all-around shortstop in the NL — maybe all of MLB — the Marlins have their own superstar shortstop in the making in Hanley Ramirez. Ramirez has equal or better numbers than Reyes in every offensive category other than stolen bases, and also bats leadoff. Oh, and when we start thinking the Mets have the beBst young left side of the infield in baseball (in Reyes and David Wright), consider that the Fish have Ramirez and Cabrera. Between the young “mainstay” infielders on the Marlins and the Phillies (Ryan Howard, Chase Utley, Jimmy Rollins), the NL East promises to be an exciting division for quite a while.

Am I crazy, or is there a significant problem with the decibel levels on SNY? I know that commercials tend to be louder than the regular programming, but the disparity during Mets games is obnoxious. During the third inning interview with Omar Minaya, I put my TV volume on 55 and still had to stand next to the speaker to hear the conversation. Yet once the inning was over, I had to turn the volume down to 15 so that the neighbors wouldn’t call the cops. It’s understandable that the advertisers want to be heard if you’re making a bathroom break, but you shouldn’t be able to hear the ads if you’re walking to a “common toilet” at the end of a fraternity hall — or to a keg party across campus.

The Florida Marlins have a bunch of lazy-ass slackers, led by Miguel Cabrera. In that ugly third inning, with two outs, both Cabrera and Mike Jacobs were taking their sweet time around the bases on Jacobs’ Texas-leaguer fly ball. I highly doubt either of those players would be jogging around the bases in that situation if Joe Girardi were still managing the team.

Mike Pelfrey faces Ricky Nolasco at 7:10 PM. If you are attending the game, look for me in the Loge level, section 20. I’ll be the only man in the stadium wearing a Mo Vaugn jersey. Tap me on the shoulder, mention MetsToday, and I will buy you a refreshing beverage. 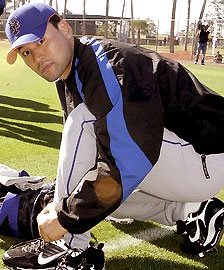 Had to hold off on the preview while we waited to hear the results of the examinations of El Duque and Jose Valentin.

From what we understand, Orlando Hernandez has bursitis in his shoulder and will be out indefinitely. He’s been placed on the 15-day DL and likely will be out longer than that. Chan Ho Park has been brought up to start tonight’s game in his place.

Additionally, Jose Valentin has an ACL injury to his knee, and will also be put on the 15-day DL.

Ruben Gotay will take his place on the Mets roster.

As always, you can get the most detailed pitching notes from Metsgeek. Read over there to get the full scoop on the Marlins. Additionally, I’ll give you my brainless comments here.

With El Duque out, Park gets his first MLB start of 2007. He’s gone 3-1 for New Orleans, albeit with a frightening 7.24 ERA. In four starts he’s pitched 21 innings, allowing 26 hits, 5 walks, 6 homeruns, and he struck out 20. We can be optimistic and say, “well, he’s pitching in the PCL, where homers are aplenty”, but an ERA over 7 is an ERA over 7 (in contrast, the ERA’s of Philip Humber and Jason Vargas are in the 4s). The six homers in 21 innings certainly drives home the point that the PCL parks are small, but it doesn’t make me feel any better about Chan Ho’s numbers. Interestingly, all six homers were to righthanded batters — which suggests that he’s hanging his curveball (you hang ’em, we bang ’em!). Again, that possibility does not make me feel any more comfortable.

Scott Olsen is a big lefty trying to build on a strong rookie season. He can be dominant at times — he struck out 10 Braves in 8 innings in his last start — but can also have trouble with his control. He is the Marlins’ version of Oliver Perez.

To beat Olsen, the Mets’ righthanded batters must be on their game, as Olsen’s slider will eat up Shawn Green and Carlos Delgado. Additionally, Chan Ho Park must find a way to give the Mets 5-6 decent innings. This game depends very much on which Scott Olsen shows up. If the “good” Olsen is pitching, the Mets’ slumping lineup might not be able to make up for Park’s inadequacy. If the “bad” Olsen is on the mound, the game could go either way, and likely turn into a battle of the bullpens. I like the Mets’ chances in that event.

Satisfying Answer: Because Sosa just pitched yesterday (he won, pitching 6 shutout innings). And before you ask, Vargas pitched on Saturday and Humber Friday … and Adam Bostick on Thursday. So it is just dumb luck that El Duque’s missed start coincides with Chan Ho Park’s day to pitch.

Pelfrey is coming off a very poor start — one that might have sapped his confidence. If so, it could be another quick outing for the young righty. Trying to predict what Pelfrey will do is akin to predicting next week’s weather: who knows?

Nolasco is making his first start after coming off the 15-day DL with an elbow issue, so his predictability is equally unpredicatible. Though he also had a strong rookie season, he did so in spite of getting rocked several times by the Mets.

This is the “swing” game — it can go either way. If Pelfrey finds himself, it could be a good ballgame for the Mets. Otherwise, this game is fated to be in the hands of the middle relievers, once again, as neither starter is expected to get far past the fifth.

This is an important game for Oliver Perez to be “on”, because it is likely that the Mets’ bullpen will be used heavily in the first two games. The Mets will need another strong 6- to 7-inning outing from the enigmatic lefty in order to garner a win.

Anibal Sanchez had an outstanding rookie campaign, and is 2-0 this year, but has yet to get past the sixth inning — he pitched less than six in all but one of his starts. Also, his WHIP is 1.92, mainly due to trouble with control. If the Mets batters can get back to their patient approach, they should drive up the pitch count and knock Sanchez out early — and tee off on a tired and weak Florida bullpen.

Mets’ Hitting — If You Can Call it That

The Mets offense as a whole is ice cold, and looked awful against the worst pitching in the NL East. The good news is that Shawn Green has a six-game hitting streak, and hitting somewhere around .500 in that span. That could change tonight, however, if Olsen can get him to chase the slider. Also swinging a hot bat lately is Damion Easley, and the timing could not be better — he’ll be playing in place of Jose Valentin for the next few days.

Pitcher Scott Olsen is batting .556 so far this year, so he’s not a gimme at the end of the order. Miguel Cabrera and Hanley Ramirez are Florida’s leading hitters, and Cabrera is coming off a 5-for-5 day against the Phillies on Saturday. Veteran Aaron Boone and leftfielder Josh Willngham are also wielding hot bats of late, both hitting .348 over the last seven games. However, Mike Jacobs is starting to cool off after a hot start, and Dan Uggla is in a 7-for-33 slump over the last week.

On paper, it looks as though the bullpens will have a big part in deciding these three games. Of course, that doesn’t mean that Scott Olsen, Oliver Perez or some other starter won’t come out and toss eight shutout innings. If my guess is correct and this series does come down to the bullpens, I’m liking the Mets chances — even with Aaron Heilman off his game. For one, the Mets still have Billy Wagner to close out the ninth, while the Fish have … hmmm … who do the Marlins have? Jorge Julio — who wasn’t very effective in the closer role — is on the 15-day DL, and the Fish could go to any arm in their ‘pen, including former Mets Henry Owens and Matt Lindstrom. With the Florida bullpen a smattering of question marks, I think the Mets have a good chance to take two out of three.