Sometimes you have to take things into your own hands.

The Mets’ newest strategy is reminiscent of a high school team’s: put your best athlete on the mound, and count on him to pitch, hit, and run your team to victory.

Orlando Hernandez did it all — with his arm, legs, and bat.

He did it on the mound, pitching seven shutout innings of two-hit ball, expending 95 pitches, en route to his sixth victory of the season.

And he did it at bat, attempting a drag bunt and singling once.

And he did it on the bases, stealing for the second time this season and scoring the second run of the game.

In the fifth inning, with a tight one-run lead, El Duque was eager for an insurance run. So, he lashed a base hit, stole second, and scored on a single by Jose Valentin. Moments later, Valentin alertly took second on a pitch in the dirt, and Carlos Beltran drove him home with his first opposite-field hit in five years to put the Mets up 3-0 on All-Star starter Jake Peavy.

The Mets scored first in the fourth inning when Paul LoDuca stroked a two-out single to score Carlos Beltran from second base. I would have mentioned it before but you wouldn’t have believed me. Lost in the boxscore was the preceding at-bat by Shawn Green. Green fell behind 1-2, but hung tough, working the count full and fouling off several pitches before flying out to leftfield. That nine-pitch AB gets ignored by the statheads, but was a significant contributor to LoDuca’s hit. After a tough encounter such as that, most pitchers will be not only physically tired but mentally exhausted as well. OK, maybe “exhausted” isn’t the correct word, but once the at-bat is over, there is often something of a mini mental crash — a pitcher gets so focused on getting the batter out, that the feeling of relief causes him to drop his guard to the next batter. If there’s a Bill James disciple out there, I’m interested to find out the MLB average of a hitter who follows a long count in the same inning.

The Mets tacked on a run in the eighth on a sac fly by Lastings Milledge, and then broke the game open with three more runs in the top of the ninth off their old pal Royce Ring.

In short, the game was the exact opposite in every way, shape, and form from the opener.

As much as I love to see El Duque stealing and running around the bases, I also have that twinge of fright in the back of my mind, wholly expecting him to come up lame with a pulled muscle.

How long are we going to have to deal with the SNY cameras focusing on Howard Johnson after every Mets’ hit and RBI?

Since they appear to be the best on the team at garnering quality at-bats, running the bases, and handling the bat, I suggest that the Mets work Orlando Hernandez, Jorge Sosa, and Tom Glavine into the lineup. Sosa played the outfield for his first five pro seasons, so he can spell Green in right, El Duque would make a fine leftfielder, and Glavine can play first base. There you go — no trades need to be made, simply work from within.

It’s amazing what happens when a big, bad professional team employs the advice given to little leaguers. The Mets FINALLY took the first pitch as a habit, rather than an aberration, and not only drove up Jake Peavy’s pitch count to 100 by the sixth inning, but also scored on the All-Star three times. Huh. Imagine what might have happened if they took a few pitches against Johan Santana.

Speaking of taking pitches … though Carlos Beltran had a long overdue fine day, his last at-bat of the game was a good example of his troubles this year. He worked the count 3-1, and in the process Valentin stole second. This presented a two-out, RBI opportunity for Beltran, and put him into position to swing at his pitch to drive in the run. However, he swung at ball four on both subsequent pitches. It was clear from his swings that he was zoning inside, as he waved over both pitches, which were off the outside part of the plate (batters miss over when they’re ahead of a pitch, under when they’re late, generally speaking). This was Beltran’s issue B.D. (Before Delgado) — forcing a swing to drive in a run rather than taking a walk. There’s something valiant about a hitter who wants so badly to drive in runs, but unfortunately Beltran is not nearly as effective when forcing the issue. He needs to get back into the groove of taking walks, and letting the guys behind him drive in the runs when the situation presents itself.

I hate to be a nit-picker, but why isn’t Chip Ambres in rightfield in the ninth inning? I’d like to have seen Sandy Alomar Jr. behind the plate, too — though I suppose LoDuca and Mota are more familiar with each other (yet, that shouldn’t matter in a 7-zip game).

The rubber match pits John Maine against Greg Maddux at 10:05 PM EST. I have no idea what the Left Coast teams have against afternoon ballgames — particularly in a city where the weather is always sunny, 75 degrees, and little humidity. YAWN!

Apparently I’m not the only one who thinks Willie Randolph’s cement head regarding youngsters and “his guys” is beyond logic. Check out More Youth Hatred from Randolph on Blastings Thrilledge.

In case you missed it, listen to Matt Cerrone interview Lastings Milledge and Steve Burkhardt on MetsBlogTalkRadio. Milledge’s offense has been nice to see thus far, and in this chat you’ll get a good listen to his defensiveness.

Milledge for Sosa? Find out at Lone Star Mets how a sock sent Lastings to Texas for Sammy Sosa.

Mr. Met brings up an interesting point regarding the impending free agency of Oliver Perez.

Metstradamus is running his annual Hall of Hate. Here’s your chance to vote in such hated men in Mets history as Dick Young, Pete Rose, Richie Hebner, Mel Rojas, and Albert Pujols, among others. (How Hebner and Young aren’t in yet, is beyond comprehension … get over there and VOTE!) 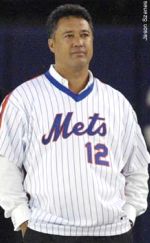 After hearing about Ron Darling’s association with Weight Watchers in early spring, there hasn’t been a whole lot of hype about waistline — though he does seem to be gradually slimming each week we see him on SNY.

For those wondering about Ron’s weight, check out his midseason update on the Weight Watchers website.

Sounds like after shedding a few more pounds, he’ll fit into Keith’s mustache.