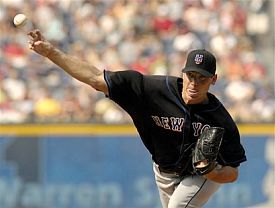 Mike Pelfrey got mad … and then he got even.

After unintentionally hitting Jeff Francoeur leading off the fifth, Pelfrey walked toward and stared down Francoeur, who barked about the plunking. The jawing match nearly set off a melee, as the Braves bullpen began making a move toward the playing field. It would have made an interesting fight — the 6’4″, 220-lb. Francoeur against the 6’7″, 200-lb. Pelfrey — but the Brooklyn fireplug Paul LoDuca buffered himself between them. It was awesome to see Pelfrey stand up to Francoeur, but the altercation clearly unsettled him, as he completely lost his command, walking Andruw Jones and going 3-1 to Chris Woodward. Woodward, however, was inexplicably bunting — Bobby Cox was the only one in the stadium who didn’t see Pelfrey struggling to get the ball over the plate — and popped out to David Wright. Pelfrey proceeded to walk the next batter, Scott Thorman, and then gave up a sacrifice fly to Willie Harris, but finally settled down to strike out Kelly Johnson — getting out of the mess with only one run scoring.

The Mets jumped on the board first, thanks to a second-inning double play hit into by Carlos Delgado that scored Carlos Beltran. In the top of the fifth, Delgado extended it to 2-zip by mashing a line drive into the rightfield seats that might have maimed someone had they not ducked. Two batters later, Lastings Milledge sent a second ball to the same section, extending the lead to 3-0. The fracas with Francoeur followed a few minutes later.

After Pelfrey set down the Braves in order in the bottom of the sixth — retiring two via strikeout — Carlos Beltran led off the bottom of the frame with a solo homer over the wall in dead center. Beltran followed that up with a triple in the top of the ninth, scoring on a shallow sac fly by Delgado that finalized the scoring.

The bullpen supported and saved Pelfrey’s first win of the year in fine fashion. Guillermo Mota threw a scoreless seventh — his changeup floating all over the place, and Pedro Feliciano became a strike machine. Feliciano pitched two perfect innings, striking out five in earning his second save of the year. The final tally: 23 pitches, 18 strikes.

While the fifth inning was tough, Pelfrey also did a nice job working out of a fourth-inning jam — with two outs, men on first and third, and a full count on Brian McCann, Pelf threw a diving slider off the inside part of the plate, getting McCann to fish after it. It wasn’t the action of the pitch so much as the speed that caused the swing and miss — suggesting that if Pelfrey can ever consistently command his straight changeup, he might develop into a decent starting pitcher.

For the umpteenth time, we heard the play-by-play announcer state “… and no argument by Willie Randolph … ” After Delgado’s homer in the fifth, Paul LoDuca ripped a drive to left and was thrown out by Willie Harris in a close play that could have gone either way. LoDuca, obviously, thought it should have gone his way, and let the umpire know it — but Randolph never so much as leaned out of the dugout. That’s one thing I’ll never get about Willie — he rarely runs out to support his players. Even if he agreed with the ump’s call, you have to get out there and show the player you have his back. You also have to make sure one of your two catchers doesn’t get tossed halfway through the contest.

If you want to include LoDuca’s out, the Mets were unnecessarily retired three times for the second out in an inning at second base. Jose Reyes was picked off second in the sixth, and Ruben Gotay in the eighth.

Unless I wasn’t paying attention to his mechanics earlier in the season, Feliciano seems to have made a slight adjustment — breaking his hands slightly earlier in his delivery. I’m guessing this gets his hand out and back a fraction earlier as well, which in turn better synchronizes his release point with his stride. During his “slump”, Feliciano’s arm was dragging behind a bit, causing his arm angle to drop and his release point to drop as well. The result was his fingers were often on the side or underneath the ball at release — which causes breaking pitches to stay flat and the fastball to stay up. He looked much better today, staying on top of the ball and getting good downward action on his pitches.

Interesting aside by Joe Girardi during the FOX broadcast, commenting on Julio Franco’s greeting his old teammates in the visitor’s clubhouse prior to the game. Girardi noted that with the Braves and Mets trying to beat each other, it was a meeting that should have occurred after the game. On the one hand, I agree with Girardi. On the other, hard to hear it coming from a guy who gave helpful advice to the division rival Phillies’ Jon Lieber while managing the Marlins.

Jeff Francoeur is a big effing pu**y. To have the audacity to say something to Pelfrey after getting hit by a pitch was ludicrous — and an invitation to REALLY get hit on purpose in the future. Of course, that won’t happen, but “Frenchy” would find himself eating dust again if I were either Pelfrey or Pelf’s manager. Just take your base and shut your mouth, jackass. Pelfrey’s too erratic to be plunking people on purpose — and Francoeur is good, but not so important that he’d be the target of headhunting.

Anyone else annoyed and sickened by the Tom Glavine – John Smoltz lovefest perpetrated by FOX during the game? The first five minutes were mildly entertaining, but continuing the thing through both halves of an inning was ridiculous. Sunday’s matchup will be the third between the two pals, but FOX treated the affair like it would be the first. Also didn’t need to hear — again — how Tommy just adores Atlanta, and loved being a Brave, and blah blah blah. I half-expected the dual interview to end with Glavine and “Smoltzie” meeting on the pitcher’s mound and engaging in a long, deep, wet kiss. Hey FOX, since you’re late to the game on these things anyway, why not focus on the best-friendship between Delgado and Shawn Green? I’d much rather hear about the “good old days” in Toronto than in Atlanta.

The Mets and Braves meet in the finale at 1:05 PM on Sunday. In case you missed the announcement by FOX, it will be Tom Glavine going against his Atlanta neighbor, longtime best friend forever and former teammate with the Braves when the Braves were great John Smoltz.