Francisco Cordero Off the Market

Wow … it’s “Black Friday” yet signings seemingly coming out of the blue.

First there was Torii Hunter signing with the Angels in the wee hours of Thanksgiving morning. That was a complete surprise to just about everyone. Hours before Hunter’s contract fell out of the sky, Scott Linebrink signed a 4-year deal with the White Sox. The fact Linebrink signed with the ChiSox wasn’t nearly as shocking as the Hunter deal, but the four years was not predicted.

Now, we hear that closer Francisco Cordero has signed a 4-year, $46M contract with the Cincinnati Reds. Where the heck did that come from? Yes we all knew the Reds have needed a closer — seemingly since John Franco was shipped to Queens — but they also have more glaring holes around the diamond (and on the mound).

All three deals look to me to be way over market value. Torii Hunter received an Ichiro-type of contract, which doesn’t seem to compute — although, Ichiro never went on the open market. Still, $18M for Hunter is Beltran money, Jeter money … is Hunter worth that much?

Similarly, four years and almost twenty million for a setup man coming off a down season — and moving from the NL to the AL — seems irresponsible.

And although we all knew that Cordero was the best reliever on the market (after Mo, whose signing with the Yanks was a foregone conclusion), the fact he’s getting close to Billy Wagner money is insanity. If the Cisco Kid was still in his twenties, then OK. But Cordero is going to be 33 years old a month into the 2008 season, and only three of his nine MLB seasons could be considered dominant. But this is what happens when supply cannot meet demand — borderline talent gets top-tier dollars.

Even though we shouldn’t care about the Wilpons’ money, I’m kind of glad the Mets didn’t outbid the White Sox and the Reds for these relievers — it would have been too much money for too many years for two guys who in my mind are on the way down. They may have been helpful in ’08, but could have quickly turned into a pair of albatrosses — look at how quickly Guillermo Mota and Scott Schoeneweis went from coveted to untradeable.

On a sadder note, the market lost another reliever — but because of death. Lefty Joe Kennedy passed away, early Friday morning, reportedly from either a heart attack or a brain aneurysm. Let’s not comment on this until the facts come out, other than to say rest in peace. A startling, terrible shame to see a 28-year-old athlete die so suddenly, and seemingly without any warning. 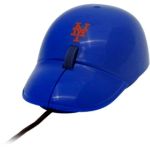 Hopefully you have the sense to stay away from the shopping malls today, aka “Black Friday”. It’s a lot easier to sit home, eat cold turkey and stuffing sandwiches, and do your shopping online — dontcha think?

For the Mets fan in your life (or yourself), there are plenty of gifts available right here through the MetsToday Store. I personally hand-picked every one of the items in the store, and will continue to add the most bizarre, interesting, and must-have items for Mets fans big and small.

Today there are two new categories: Mets DVDs and Electronics. Yeah, who knew there were “Mets electronics”, but there are. If you don’t already have a Mets mousepad, well I’m not sure what you’re waiting for. And while you’re at it, get a Mets mouse — pretty cool IMHO. And if you are like me and constantly trying to figure out what channel the Mets game is on — is it SNY, WB, FOX, or somewhere else? — then you might like the Mets schedule watch, which tells you both the Mets schedule and which channel to watch to see the game (yes, it tells time, too).

Browse around the Mets Store for holiday gifts — it’s a lot more fun than fighting for a parking space at the local mall.