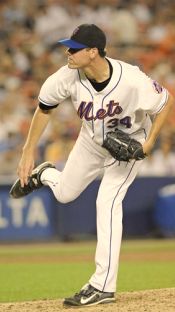 Last March — the 28th, to be exact — I thought Jorge Cantu might be made available by the then-Devil Rays, and figured he’d be a perfect fit for the Mets. At the time, the Mets’ second base position was shaky, and Cantu had a big bat.

A week later, I brought up the idea again.

By May, Cantu became an obsession to me, as he was rumored to be dealt by the Devil Rays.

Right before the trading deadline in July, I was jealous that the Reds stole Cantu in return for the equivalent of a bag of balls.

In December, I mentioned that Cantu was again available, as a free agent, and would be an ideal guy to invite to spring training.

Most recently, I reported that Cantu signed with the Fish, and it probably made sense since he would get a chance to fight for a starting 3B spot.

Cantu, by the way, was the guy who raked all day for the Marlins. He also happens to be a strong righthanded hitter who can play 1B, 2B, and 3B. He played plenty of shortstop in the minors, and I’d guess he’s a strong enough athlete to learn to play the outfield if necessary.

The Mets, of course, don’t need a righthanded slugger who can play all those positions … do they?

During the CW11 telecast of the Mets-Marlins game, announcers Keith Hernandez and Kevin Burkhardt spent several minutes discussing the Florida Marlins. Specifically, the “fact” that the Marlins would be unable to compete this year, how they couldn’t hold on to their best players, how they couldn’t have a good team because of their stadium, how losing Miguel Cabrera meant their offense would struggle mightily, etc., etc.

Listening to all this banter on how poor the Marlins were and how their offense stunk, my wife pointed out that the score was Marlins 7, Mets 1.

Yeah, I know it was a spring training split-squad game, but when your team is getting clobbered, it’s not the right time to say the opposition stinks.

Show Me a Starter

In his latest bid to take claim of the fifth starter spot, Mike Pelfrey didn’t fare too well. The man who relieved him, however, didn’t look so bad.

Scott Schoeneweis came into a bases loaded situation and struck out Mike Jacobs, gave up a bomb to Jorge Cantu to clear the bases, then got the final out of the inning.

Here’s a crazy idea: give The Show a shot at the fifth starter spot. He began his career as a starter, and started 19 games as recently as 2004. He’s become more of a junkballer since (getting off PEDs and) losing 5 or so MPH from his fastball, and as a result works harder on changing speeds and hitting spots. If the Mets can’t trade him for somebody decent, why not see what he can do as a starter? Pelfrey certainly isn’t the answer, and who knows when we’ll see El Duque.

Before you scream “but he can’t pitch to righthanded batters”, let me tell you that I don’t care much for that fact, nor platoon splits in particular. Crazy? Consider the following:

Throwing it out there … if we end up stuck with him, maybe Scott Schoeneweis could be a candidate as a spot starter.