I Don’t Get It 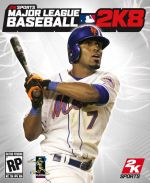 If you have been watching the SNY broadcasts of the Mets spring training games, you likely have seen the TV commercial for 2K Sports MLB video game, featuring Jose Reyes (who happens to be on the cover of the game package).

If you haven’t seen it, it begins with what looks to be a clubhouse guy polishing a bat and counting … presumably, counting the number of wipes he does with the rag on the bat. Jose comes into the scene with a boom box playing loud music. The clubhouse guy whacks the boombox with the bat, then goes back to his wiping and counting. Reyes looks at him and starts laughing.

OK, so, there’s *some* humor in the guy stopping what he’s doing, whacking the boombox, and going right back to what he was doing as if nothing ever happened. That’s about it. The rest of the commercial makes no sense, and really isn’t that funny.

Or have I lost my sense of humor? 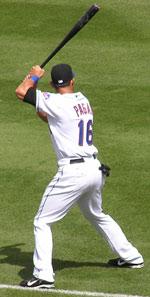 Only a week ago, many of us were excited by the hot hitting of Angel Pagan. He was scorching the ball, hitting close enough to .500 to remind us of spring training stars such as Butch Huskey and Darren Reed.

However, it appears now that Angel has fallen to Earth.

Pagan is now down to .333, more than 100 points less than this time last week. We can say that it’s merely a minor slump, a few bad bounces, a bit of poor luck — after all, he has only 60 at-bats, so of course his average will drop drastically after going, say, 2 for his last 17.

In reality, it’s more like this: Angel Pagan is regressing to the mean, to his true capability.

For the first part of March, Pagan was “in the zone”, and it was fun to watch. But it wasn’t something that was going to continue forever. I still hope he will make the team, though I have a feeling Brady Clark will get that last roster spot. But it’s now clear why the Mets were looking for an outfielder, even though they seemingly already had one ripping the cover off the ball.