One more and the Mets will complete a sweep in Pittsburgh.

Johan Santana was spectacular, never struggling in a 9-inning complete-game shutout. Johan gave up three hits, no walks, no runs, and struck out 7 in a textbook, 113-pitch performance.

He only needed one, but the Mets gave him four. Hot-hitting Brian “Sluggo” Schneider gave the Mets an early lead with a two-run homer in the second. Schneider singled in another run in the fourth, and Carlos Beltran blasted a solo shot in the sixth to close out the scoring for the day.

Argenis Reyes went 3-for-4, notably relaxed with the exit of Anderson Hernandez from the organization. OK, maybe AHern’s trade to the Nats had no effect. Reyes has, however, been proving me wrong since I doubted the logic of placing him at the top of the order. He’s boosted his OBP to .316 with his recent hot streak (though he’s still not taking many walks).

David Wright got a well-deserved day off, and hardly anyone noticed. Damion Easley took his place in the infield and — strangley — in the third spot of the lineup.

Maybe Jose Reyes needed a rest, too. Jose made his 14th error of the season on a ground ball, dropped a throw from Carlos Delgado, and was nearly picked off second base in the top of the ninth. Perhaps he’ll rest on Monday, and Damion Easley will play short and lead off.

The Mets bring the broom on Monday in a 12:35 pm start. John Maine goes to the mound against Paul Maholm. 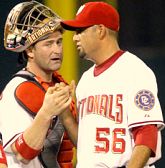 That’s right — the Mets have chosen to “bolster” their bullpen with a man sporting a 5.77 ERA.

Good luck with that.

The Mets traded Anderson Hernandez to the Nationals for Ayala, who in 62 games and 57 innings this season has allowed 63 hits, 22 walks, and struck out 36. He has a 1-8 record, no saves, 4 blown saves, and 19 holds. Bright spot: he’s allowed just 6 homeruns in those 57 frames, so one every nine or ten innings.

So why did the Mets give up someone with a pulse for this train wreck?

First is the fact that Ayala stinks. His numbers are similar to those of Guillermo Mota’s 2007 — minus the high strikeout totals. Would you trade AHern for Mota?

Second, Ayala is seventh in the NL in appearances with 62. We’ve established that the Mets bullpen is exhausted — why in the world would Omar Minaya acquire another worn-out arm?

The reasoning the trade must be this: Ayala was really good a few years ago, and is a “Minaya guy”. He started out in the Arizona Diamondbacks organization, but was plucked by Minaya in the Rule 5 draft prior to the 2003 season. It turned out to be a genius move, as he went 10-3 with a 2.92 ERA as a rookie for the Expos. Ayala sported a svelte 2.69 ERA in 81 games under Minaya’s watch in 2004 as well.

Problem is, those years of glory came when Ayala was young and strong — his best years came during ages 25, 26, and 27 (no surprise there). As you might have remembered, Ayala blew out his elbow during the World Baseball Classic, and underwent Tommy John surgery, ending his 2006 season. He missed the first two months of last year while continuing to rehab, before returning and pitching fairly well — 3.19 ERA, 1.30 WHIP, 28 Ks and only 12 BB in 42 IP.

This year, Ayala has been awful, and getting worse as the season wears on — he has a 6.97 ERA since the All-Star Break.

Hold on to your seats, friends. We may soon be reading about the acquisitions of Sammy Sosa, Wil Cordero, Tomo Ohka, and Sunny Kim as Minaya stubbornly attempts to re-create past history.

Prior to Saturday night’s game, it was reported that Billy Wagner complained of elbow discomfort after a 20-pitch bullpen session.

Those who follow MetsToday and pay attention should not be surprised, since I stated in the notes of Game 111 postgame analysis:

As if the bullpen weren’t bad enough, Billy Wagner has “tightness in his elbow” and was unavailable for the contest. My many years of being around pitchers tells me that he could be on the verge of an elbow issue — likely some form of tendinitis, such as epicondylitis (a.k.a., tennis elbow).

Not good news for the Mets.

Funny, ain’t it, that a know-nothing hack blogger like me predicted both John Maine’s shoulder issue and Wagner’s elbow problem?