Mike Pelfrey did it again.

For the 11th time in his last 13 decisions, Mike was magnificent. Big Pelf scattered six hits and allowed no walks, striking out six over nine innings, and nearly completed his first big-league shutout. Pelfrey has established himself as the Mets’ second-best pitcher, is pitching like an ace, and there are no further superlatives that can possibly describe his performances or value since early June.

Though in the end he only needed two, the Mets gave Mike nine to work with. Six of those nine came courtesy of Carlos Delgado, who could very well make a run for NL MVP if he keeps his current pace. In addition to his two three-run bombs, Delgado was hustling all over the place and made a fantastic, diving stop in the top of the ninth (though all I could think about was that commercial “I’ve fallen and I can’t get up!”). Kudos to Carlos!

Fitting, isn’t it, that both Pelf and Delgado should have such great games simultaneously? 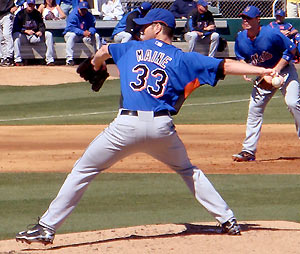 After hearing that John Maine’s shoulder issues are compounded by a bone spur — and that his season may be in doubt — I thought it made sense to check with an expert on the subject.

Ironically, former Mets trainer Bob Sikes had already posted an enlightening article titled “The Bad Signs Regarding John Maine’s Shoulder” on his own blog Getting Paid to Watch.

… a spur is almost best-case scenario as it’s easily shaved down through a scope. If there is minimal soft tissue damage, he could be back to full strength by spring training.

But what to do now?

It hurts and he is unable to throw between starts. Not throwing on the side often leads to performances like last night. It’s a routine he won’t be able to sustain. Although he had good velocity last night, he displayed poor command and had no movement on his fastball.

If he is unusually sore this morning, the Mets will know its not going its not going to work. The spur might be causing soft tissue damage and they will need to shut him down for the year to have the surgery and begin the rehab.

Ouch … and I mean that both literally AND figuratively.

Now that we know the possibilities ahead, it makes some sense to understand why this happened in the first place — so that it can be avoided in the future.
You may know I’ve been concerned with John Maine’s mechanics since July (OK, maybe obsessed). Through an interview on Live From Mickey Mantle’s and email correspondence over the weekend, Bob confirmed that the bone spur and the rotator cuff strain are probably related, and that both injuries could also have been the result of a mechanical flaw — though, he adds that the flaw may have been caused by the injury, rather than the other way around.

… I’d imagine it was the weakness/discomfort in his shoulder led to the mechanical flaws … my best guess is that the spur is embedded in a tendon and probably developed slowly over the past year in much the same manner as does a heel spur. Wear and tear and inflammatory response to overuse is what causes spurs to pop up.

I don’t see him getting better. Not being able to throw between starts indicates pain which further puts him in a position for further poor mechanics and an increase in the likelihood of further injury. I like shutting him down and fixing it.

None of this is encouraging news for those who want to see John Maine on the mound again in 2008. But more to the point, it seems of utmost importance that Maine work under the supervision of a trained eye during his rehab, to ensure that bad habits in his delivery are ironed out.

Which brings up another interesting point: while Oliver Perez has benefited from the easygoing, hands-off coaching style of Dan Warthen, is it possible that the loss of structure and rigidity in preparation under Rick Peterson is part of Maine’s downfall — and his injury? Let’s not forget that Maine’s less-than-stellar second half of 2007 could be blamed on — by Maine’s own admission — not sticking to the strict workout schedule prescribed by The Jacket.

Whatever is to blame, the bottom line is, we should expect to move on to the end of 2008 without John Maine as an asset. As a result — and as Bob Sikes suggests — Jon Niese could be up here before September.