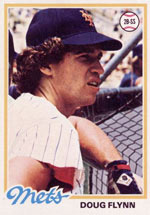 In response to Mike Schmidt’s email to the Phillies, former Met Doug Flynn sent a note of his own to the home team clubhouse at Shea.

Right here, right now, there is no other place you want to be, watching the world wake up from history. Bat on the ball, take two and hit one to right, hit ’em where they ain’t. Choke up with two strikes. Spit in your glove to keep it from drying out. Pick up pebbles in the infield that could cause bad hops.

And if you wake up in the morning with your head on fire and your eyes too bloody to see, go on and cry in your coffee but don’t pitch to Utley. You guys have to be big shots, you have to prove it to the crowd.

The Phillies think you might be better than you think you are. They know last year was such a fluke it can’t happen again. And I played for Joe Torre, the same guy who won all those games for the Yankees, so I know what I’m talking about.

(er, #23 as in NOT Dave Schneck, Leroy Stanton, Tim Bogar, Bernard Gilkey, McKay Christenson, Jason Phillips, Julio Franco, nor any of those other guys, but me, Dougie Flynn)

Doug Flynn, like Mike Schmidt, was a Gold Glove-winning infielder from the late 1970s/1980s and also like Schmidt, was the best infielder on his team (1979 Mets). Also in common with THIRD-baseman Schmidt: Flynn is best known for hitting the THIRD inside-the-park homerun in Shea Stadium history, being the THIRD Met to win a Gold Glove, and was the THIRD-best player in the package sent by the Reds to the Mets in return for Tom Seaver. Flynn, who is now a banker in his hometown of Lexington, Kentucky, also shares with Schmidt the status of irrelevancy to the Mets and their fans.