The Mets squandered a six-run lead, but stayed in the game and squeaked out a win thanks to the suddenly explosive offense.

Carlos Delgado didn’t hit ANY homeruns, but David Wright, Carlos Beltran, and Fernando Tatis picked up the slack for the MVP candidate in leading the Mets to victory.

Mike Pelfrey was far from dominating, but kept the Mets in the game through five so-so innings. However, he allowed the Nats to chip away at an ample advantage, and handed a slim two-run lead to Aaron Heilman. Heilman promptly allowed a walk and a two-run homer, tying up the game and likely terminating any possibility of his entering another contest in 2008.

The game remained 7-7 until the 7th, when the Mets exploded for four runs, capped off by a two-run, single by Brian Schneider. The Nats came roaring back with three of their own in the top of the eighth, but the Mets answered with another two in the bottom of the frame to seal the game.

Brian Stokes finally broke his string of stupendous pitching, allowing a three-run homer in the eighth to Cristian Guzman.

Luis Ayala converted his seventh save of the season. Joe Smith earned his second win in as many days, and fifth of the year.

There are 17 games left, and the Mets are up by 3.5 over Philadelphia, with a four-game advantage in the loss column (you can always win more games, but you can’t lose less).

The Mets get another day off on Thursday, then host the Atlanta Braves for a three-game series. Johan Santana faces Mike Hampton in the opener on Friday night. Game time is 7:10 pm.

Who Is This Man? 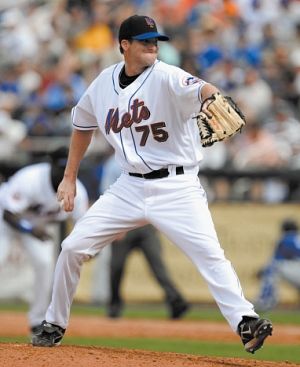 Quick, can you identify the person in the picture above?

I’ll give you a few hints …

He IS being given the infamous “Philip Humber Treatment”.

Give up? Chances are, you will see him if the Mets get a 15-run lead on the Nationals by the fourth inning tonight. Or maybe not.

First reader to correctly identify this young man — who has been seen walking around the field and in the bullpen at Shea wearing a realistic-looking Mets uniform — gets a Billy Wagner bobblehead (elbow intact).

Just in case the heated NL East pennant race is not enough to get you to go out to Shea, may I be the one to tell you that tonight is Pet Sponge Night.

That’s right — the first 12,000 kids to enter the stadium will receive a free T-shirt courtesy of Uncle Norman’s™ Pet Sponge, the 4-in-1 pet sponge that’s good for 8 luxurious baths! I imagine it’s a sponge that would make Billy Mays proud. (Actually, we’re not sure if it’s a 3-in-1, 4-in-1, or 5-in-1 — we’re getting conflicting scouting reports. But we do know that it is Paraben free.)

Luckily, there are still seats available for this once in a lifetime offer, but hurry before the game sells out. And make sure you arrive early and have someone 12 or under in tow, or you’ll miss out.

And no, I’m not sure why this offer wasn’t combined with Dog Day at Shea last Friday. Would seem to have been a no-brainer.

Raining on the Parade

Interesting article over at Gotham Baseball called “Party Pooper”, which questions all the media fawning over the “creative Houdini” known as Jerry Manuel, and Carlos Delgado’s role in the Mets’ failures and successes over the last two years.

More than any player, it has been Delgado that has taken advantage of the change in the clubhouse. Whatever the reason for his dramatic turnaround, one thing is clear, the passion he’s mashed the baseball with since June 27 has been evident.

No longer is it, “We’re so good, we get bored”, or “They don’t pay me to think”, from the veteran first baseman, who hit two more home runs in Tuesday’s big win. Rather, reporters who used to flock to his locker after games, only to be ignored, now are seeing a player who has finally embraced his role as the unofficial captain of the team.

Should Manuel get the credit for this metamorphosis? Perhaps. Should Delgado take some sort of responsibility for his inability to perform for his former manager?

Absolutely. Yet, it seems that his early-season struggles have all been placed at the feet of Randolph, who only asked his first baseman to play hard, produce and lead. Billy Martin and Reggie Jackson had that kind of relationship,too. Only difference is that Reggie already had three rings and a World Series MVP at the time. The two made it through the 1977 season despite the bitter feud, found a way to get past their problems,and won a title together. Even more admirable, when given the opportunity to get his skipper canned, Reggie said no, it wouldn’t be good for the team.

Gotham also calls out William Rhoden of the New York Times for being inconsistent. If you missed it, Rhoden is the one who identifies Jerry Manuel as a “Houdini” — but is the same writer who in June placed blame on Delgado, Carlos Beltran, and Billy Wagner for not displaying mental toughness under Willie Randolph.

As I’ve stated before, I like Jerry Manuel and think he is the right manager for this team right now. I simply don’t see the “genius” everyone else does, and don’t believe Manuel has had nearly the impact on the Mets’ success that the media extols. From what I’ve seen, Manuel is a good guy, in the right place at the right time, who has been given the freedom to manage like there is no tomorrow. But “creative Houdini”? That’s a little over the top.

The Mets’ success is not all about Jerry, it’s about Delgado hitting like crazy, Beltran following his lead, Pelfrey coming into his own, Santana having his typical second half, Tatis having the July of his life, Wright and Reyes doing what they always do, and the Mets getting really lucky with some players performing above their heads.