If you want to see the Mets in the playoffs this year, you better get used to games like this.

The Mets offense woke up, charging to a 7-1 lead by the fourth inning. Jose Reyes set the tone with a leadoff homer on the fifth pitch of the ballgame, and Carlos Delgado added a dinger of his own a few minutes later.

Reyes again was the catalyst in a four-run third, as he led off with a walk and scored on a triple by Daniel Murphy. Delgado drove in Murphy, and Carlos Beltran hit the first of his two homers in the game to plate Delgado. Reyes drove in the seventh Mets run with a single in the next frame, and Beltran’s blast in the eighth put the Mets ahead 9-5.

You’d think a four-run lead and a nine-run outburst would be enough to get a Mets fan off the edge of his chair, but lo and behold, the bullpen nearly gave the game away in the ninth. The Nats rallied for two runs off Joe Smith and Pedro Feliciano to make the game 9-7, but Luis Ayala came on to put out the fire, striking out pinch-hitter Roger Bernadina to end the game.

The Mets scored nine runs, but required eight pitchers to complete the contest.

Aaron Heilman made his first appearance in a week and gave up a double and a single before yielding to Scott Schoeneweis — who remarkably did not allow either of his inherited runners to score.

The Mets have a chance to salvage a split by winning Thursday’s game, which begins at 7:10 pm. Johan Santana goes to the hill against Tim Redding.

Hold on to your caps, folks … the next ten days are going to be a rough ride.

Although Fernando Tatis hit only .244 in August, he picked things up these past few weeks, going 10 for his last 31 with a .910 OPS. That kind of offensive production is sorely needed on a team with a precarious bullpen situation — as I’ve been saying all along, the best defense against late-inning relief catastrophes is to score more runs!

“With the loss of Tatis, we have to reassess where we are offensively.”

Manuel suggested that “the two kids” will handle left field going forward. That would be Daniel Murphy and Nick Evans, if you’ve been living under a rock since the trade deadline (speaking of, Manny Ramirez, Jason Bay, Xavier Nady, Casey Blake, or Adam Dunn would sure look great in orange and blue right now). If Evans can continue to pound lefties to the tune of .338, and Murphy can continue his impression of Wade Boggs, the Mets might be OK. If they can’t, things will be quite difficult.

The main issue is that opposing pitchers will have the option to pitch around the middle of the lineup (which hasn’t done much in the last few days anyway). They may pitch to David Wright, but most certainly will serve up sliders in the dirt to the two Carloses. After the fifth spot in the order, there isn’t much to speak of — unless, as previously mentioned, the kids remain hot.

Most likely, Ryan Church will be moved down in the lineup to #6, which may or may not be a good thing. He has only 6 hits in his last 23 at-bats, but is the only legitimate power source to place after Delgado. Then again, if Church does heat up, and hit like he did in April and May, do you want to bury him so low? Wouldn’t you rather make sure he gets an at-bat in the first inning?

That’s not something to consider, of course, if / until Church gets in a groove. In the meantime, we’ll likely see “the kids” in the two-hole — a rotation of Murphy, Evans, and possibly Argenis Reyes, who despite a .277 OBP is considered an ideal batter behind leadoff man Jose Reyes. Um, yeah. Usually I’m not one to lean on stats to support an argument, but in this case it’s simple logic. I don’t care how many times the SNY announcers say “he’s always in the middle of something” — the reality is, those “somethings” are occurring less than 28% of the time.

Assuming the left fielders bat second, and Church bats sixth, that leaves the seventh and eighth spots for the catcher and second baseman. If Ramon Castro were 100%, he’d be the ideal guy to pick up the bottom of the order — heck, I’d consider him sixth until Church comes around. But he was just removed from the DL a few days ago, and no one’s quite sure how healthy he is. Add in the fact that Brian Schneider’s knee is suddenly an issue, and Damion Easley is also hobbling, and we’re looking at a bottom three of Robinson Cancel, Argenis Reyes / Luis Castillo, and the pitcher. That’s not a championship lineup — unless the year is 1969.

Again, if Wright – Beltran – Delgado are hitting, opposing teams will have the option to pitch around them, which magnifies the importance of everyone else in the lineup. So not only is it necessary for the big three to get back on track immediately, but the Murphy / Evans platoon has to continue producing above their heads, Church has to get going, AND an “unknown” has to come out of nowhere with big hits.

Oh, and then there’s Jose Reyes, who is hitting .216 this month.

Not sure about you, but this “reassessment” hasn’t bolstered my confidence.

Mismanager of the Year

Yesterday at his blog for Newsday, David Lennon had this to say:

Jerry Manuel = NL Manager of the Year? If the Mets somehow hold on and make the playoffs, he has a better chance of winning that award than Carlos Delgado has of getting the MVP. Watching Manuel trying to win the division with this bullpen makes David Blaine’s stunts look mundane by comparison. Hang upside down over Central Park? Big deal. See if Blaine can get three outs with Duaner Sanchez or Aaron Heilman.

I know I shouldn’t be, but I’m always stunned when a consistently solid, professional journalist such as Lennon (who I respect highly) makes such an inconsistent, illogical proclamation.

Maybe I’m the crazy one, but it’s been Manuel’s “pedal to the metal” (mis)management of the bullpen — carried over from Willie Randolph’s playbook — that has resulted in this late-season collapse of the relief corps. We saw it in 2006, but were lucky to have the PED-filled Guillermo Mota, we saw it in 2007, and we’re seeing it again in 2008.

I’m not sure how many times we have to go over this, but in this day and age, without PEDs, a Major League team cannot expect a 5-man staff of relievers to carry 90+% of the innings between the starting pitchers and the closer — unless that team is extremely lucky and/or has a starting rotation that goes unusually deep into their starts.

The bullpen is not full of guys who “stink” — they have simply been overused and overexposed. You can’t “manage” every game like it’s the seventh game of the World Series — as if there is no tomorrow — and expect human beings to pitch effectively through a 162-game season. At some point, after all those pitches in both the bullpen and the games, there is going to be a breakdown.

Further to the point, one of those five is Duaner Sanchez, a man who hadn’t pitched at full strength in over a year and a half. How could an organization responsibly expect Sanchez to “shoulder” a load of more than 45-50 games? He’s appeared in 64 thus far, by the way. Additionally, another of those five is Joe Smith, who is only two years out of college and already appeared in 20 games more than last year. For those who remember, Smith ran out of gas right around the All-Star Break last season; to think he’d be able to handle a more rigorous schedule this time around was wishful thinking. Remarkably, he’s been effective lately … but for how much longer? With the way the rest of the ‘pen has performed, I’m guessing we’ll see Smith pushed to the limit — likely, beyond.

Bottom line: you can blame the bullpen’s poor late-season performance for the Mets’ misfortunes, but you can’t remove the manager’s ill-advised “management” of that same crew from the equation. Had Jerry Manuel been more cognizant of the “big picture” from the beginning, and understood the long-term effects of his incessant pitching changes and matchups — the same ones, by the way, that Willie Randolph used to wear out the ‘pen last year — we’d be watching a fresher and far more effective relief corps today. 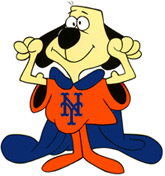