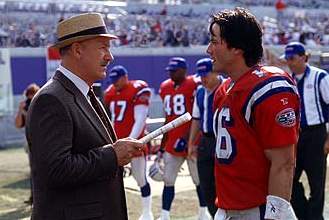 In the immortal words of Coach Jimmy McGinty, speaking to Shane Falco:

Winners always want the ball… when the game is on the line.

Johan Santana is pulling a Shane Falco and demanding the ball for Saturday’s game. With that information, I’m doing a rain dance.

Because although Johan is clearly the ace, and the one “big game” pitcher the Mets have, I don’t see this as a great decision. First of all, Santana is pitching on short rest, and coming off a game in which he threw a career-high 125 pitches. If he has anything at all, it can’t be enough to get him through more than six innings — if that. Let’s pretend Johan no-hits the Fish through those six, then runs out of gas. Guess what? The vaunted Mets bullpen takes over. Yee ha.

Better yet, let’s assume the best possible scenario: Johan pitches great, the Mets win. Now who starts in the next version of the most important game of the season on Sunday? Ollie Perez on short rest? His history — both recent and working on short rest in his career — is questionable at best. Certainly Jon Niese won’t get the ball. I suppose Jerry Manuel would be forced to take his matchup strategy to the max — possibly using a different pitcher (or more) every single inning.

And then there’s thinking about beyond tomorrow, beyond Sunday, and beyond 2008. Johan Santana is signed for seven years. Although he hasn’t shown any signs of breaking down, pitching on three days’ rest, after throwing 125 pitches, could push him beyond his limits and cause the beginning of an overuse injury — particularly if the Mets DO make the postseason and Johan, obviously, continues pitching in October.

The desperate moves to push the team into the offseason should have happened on July 31, not September 28th. If it was so important to save the prospects “for the future”, and not give them up for people like Jon Rauch, Chad Bradford, Manny Ramirez, Xavier Nady, etc., then that same long-term thinking must be applied when it comes to protecting their most expensive investment. If the Mets truly are concerned about 2009 and beyond, then Johan does not pitch on Saturday — regardless of whether he wants the ball. Of course he wants the ball, he’s a winner!

Back to my original idea: rain dance. Let’s hope it rains all night and all Saturday, so Johan is forced to wait an extra day. It could mean all the difference in the world for the future of this franchise.

With both the Brewers and the Mets entering the last three games of the seasons with identical records, the 162-game season was distilled into three. Unfortunately, the Mets find themselves a game behind with two to go.

Mike Pelfrey did his job, hurling six strong innings and allowing just three runs. However, no one else on the team did theirs, and as a result the Mets found themselves on the wrong end of the final tally.

Once again it took seven relievers to cover the last three innings of the game, and that crew allowed another three runs. But their ineffectiveness didn’t matter much in the end, since the offense was non-existent. The Mets managed to place 11 runners on base, stranded nine, and scored one — on a fielder’s choice.

What’s there to say? The bullpen is completely spent — has been for weeks — and now the offense feels a swelling in their throats. Two games to go, and the Mets are one behind. If the Brewers can win their next two games, there’s nothing the Mets can do.

Saturday’s game is scheduled for 1:10 pm, and Johan Santana is insisting on taking the ball against Ricky Nolasco. I’m hoping for rain.