Unless you are in Miami this weekend, you won’t be able to watch the first hour of the Mets-Marlins game on Saturday.

That’s because the Marlins have scheduled a start time of 6:10 PM, to accommodate a post-game concert. Why is this an issue? Because FOX has dibs on all MLB broadcasts from 4pm to 7pm on every Saturday during the season, and the game won’t be carried by FOX. (If you’re interested, FOX will be showing the Red Sox-Angels, White Sox-Twins, and Cardinals-Astros.) There is no indication from FOX that they will be showing the first hour of the Mets-Marlins game, nor that they are ready to waive their rights to the New York market from 6 PM – 7 PM on Saturday night.

As of now, SNY will broadcast the game, but won’t be able to do so until 7 PM — likely around the fourth inning. Further, the blackout covers MLB.com as well, so don’t try watching it on your computer. Unless the Marlins change the start time, your only chance to see the game in its entirety will be by traveling to Florida and buying a ticket. But hey, the Fish are throwing in a concert as well, so there’s that.

Some day, someone is going to have to explain to me the logic behind many of these blackout restrictions. In particular, why local games are blacked out on MLB.com.

Actually, Scott, I Had Forgotten 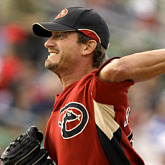 Where They Are Now: Scott Schoeneweis

This is a new category of posts, not to be confused with “Where Are They Now”. In this section, we’ll cover the news of former Mets who are still playing baseball, but not in Queens.

To kick off the new feature, we spotlight Scott Schoeneweis, who is now hurling in Arizona. And from the below quotes from MLB.com (hat tip to Walnutz), he’s hurling more than baseballs.

Despite what appear to be solid numbers last year — Schoeneweis put up a 3.32 ERA in 73 games and gave up 55 hits in 56 2/3 innings — he knows he’ll be most remembered for one thing.

“I gave up a homer to [Florida Marlins utilityman] Wes Helms in a 2-2 tie on the last game of the season, and we went on to lose the game,” Schoeneweis says. “It was a solo homer. It wasn’t like I had a four-run lead and gave up a grand slam.

“And I had pitched pretty well in four or five outings earlier that week. But that’s not what gets remembered. What gets remembered is that I blew it and the bullpen blew it, but the fact of the matter is that the team lost.

“Guys didn’t get hits in key situations. Other mistakes were made. I mean, did we as a bullpen contribute to what happened? Of course. But was it all our fault? No.”

Funny, Scott, but I actually HADN’T remembered that you were the one who gave up the homer to Wes Helms in that fateful final game. It must’ve gotten lost in my memory with all the other big hits you gave up in your two years with the Mets.

No, the thing I remember you for most is the idiocy of Omar Minaya to let Chad Bradford leave for Baltimore because three years was too long a deal for an effective middle reliever, yet it wasn’t too long to wrap up a rundown LOOGY. I also remember:

– the Mets “physical” that you passed to gain that ridiculous contract, despite suffering from a bad leg
– your innate ability to clear the bases / allow inherited runners to score
– the fastball that fell to 88 MPH from 94 MPH
– the irony of your fastball’s demise coinciding with MLB’s toughened PEDs testing
– the 15 homeruns you allowed in 115 innings in 2007-2008
– your perfectly tailored uniform, and nicely manicured hands

No worries, Scott, we’ve forgotten that one homer from game 162 of 2008. You are and will be most remembered for the fleecing you pulled on Minaya, and the consistent disappointment you delivered to Mets fans.