Ricky Nolasco’s struggles against the Mets continued, as he allowed 4 runs on 7 hits and 2 walks in 5 innings en route to his sixth career loss (against two victories) to the orange and blue.

The Mets’ offense finally figured out how to push all those runners around the bases, exploding for 8 runs on 15 hits, including a homerun by Jose Reyes and doubles by Reyes, the two Carloses, and Ryan Church (2).

Livan Hernandez lulled the Marlins hitters to sleep (who knew that Fish slept?), using a variety of lollipop curves, slow changeups, and fading fastballs. By the time the Fish woke up, Livan had muddled through 6 2/3 uneventful innings, the first Mets starter to see the seventh inning. A variety of Mets relievers turned the final seven outs into a circus, but Francisco Rodriguez arrived with his cape in the ninth to end the madness.

As expected, Marlon Anderson was DFA’d before the game to make room for Livan Hernandez. Anderson is a lock to pass through waivers, as no one is going to claim a pinch-hitter with a 7-figure contract. However, there’s an outside shot someone might be interested in him as a free-agent, if he chooses that route. I personally will miss Marlon, as I love the way he plays and approaches the game, but unfortunately there simply isn’t room on an NL roster for him. If he was a little better with the glove, particularly in the infield, he’d be more valuable, but at this point in his career, he’d need to be an outstanding pinch-hitter (like he was in 2007), and even then, I’m not sure there’s room. Good luck Marlon!

So Jerry Manuel had a chat with Luis Castillo before the game and told him he needed to be more aggressive at the plate. Castillo responded with four hits, so Manuel is a genius motivator. My only question is, what did Manuel say differently in this most recent chat, that he didn’t say in the previous 15 chats on the same subject going back to July of last year? Better explanation: Luis reads MetsToday, and was determined to prove that an old dog COULD learn new tricks!

By the way, where did Manuel get the idea that Castillo needed to be more aggressive? Was it all the pitches down the middle he’s been taking with runners in scoring position? Huh, I hardly noticed (*sarcasm*). Manuel = Master of the Obvious.

Speaking of hitting with runners in scoring position, the Mets still weren’t exactly awesome in that area, despite the eight runs scored. They left 10 runners on base, seven of which were in scoring position. Further, of their 8 runs, half scored via homeruns and doubles with a runner on first, and two more scored on infield groundouts. All told, they also failed to hit safely 9 times with runners in scoring position during the course of the game — for those with calculators, that comes to 2 hits in 11 chances, or a .181 average. Nitpicking, maybe. We certainly must be happy to see the hitters finally drive in a few of those ducks on the pond.

Livan Hernandez is not just a pitcher, he’s a ballplayer, meaning he plays, and takes pride in, every aspect of the game — not unlike that of Johan Santana and Tom Glavine. He showed it in this game with solid defense and outstanding bunting fundamentals. Every little bit helps, and when you can execute the little things, you can win in double digits despite an ERA over six.

The latest Danny Murphy comparison is Pete Rose, per Keith Hernandez. Rose, Mattingly, Boggs … those are some big names to live up to (I’m sticking by my Mike Hargrove comparison). Can we just let the kid be himself, please? He’s being set up for major disappointment … does no one remember Gregg Jefferies?

The series finale between the Mets and Marlins takes place at 1:10 PM on Easter Sunday, with Johan Santana going to the hill against Josh Johnson.

“You can’t teach an old dog new tricks” is a time-honored adage that applies in many situations. 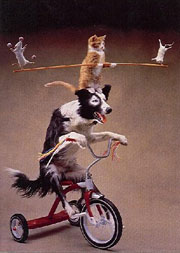 For example, you wouldn’t expect to be able to teach a 10-year-old dog how to ride a bicycle, if he hasn’t even learned how to sit. It’s just too late — a dog that age is already set in his ways, and did his learning during his formative, puppy years.

Similarly, it’s simply too late in the game to ask a 33-year-old, 14-year MLB veteran to suddenly change his entire offensive approach — such as in the case of Luis Castillo.

Only three times in 14 years has Castillo driven in as many as 40 runs in a season. It’s not what he does. Rather, Castillo is a “table setter”, a guy who finds a way to get on base. He takes a lot of pitches, looks for walks, bunts, and punches little bloops all over the field. His career OBP of .367 would make a Billy Beane disciple drool, and he also has above-average baserunning speed, even at his advanced age. As an added bonus, he plays one of the “skill” positions. In any era, from the 1880s to now, a second baseman with Luis Castillo’s skillset would be a valuable piece of a championship ballclub. His game is not unlike that of Jim “Junior” Gilliam of the great Dodgers teams in the 1960s, Nellie Fox, Johnny Pesky, Willie Randolph, or Chuck Knoblauch. Yes, in the steroid era, his power numbers are feeble, but he’s not supposed to be a star. Used correctly — at the top of the lineup — he’s an ideal complement to a lineup of power hitters. His patience makes a starting pitcher use and show his full arsenal of pitches in the first inning, and his ability to get on base sets the stage for the sluggers.

Or, you could just put him wherever you damn well feel like in the lineup and ask him to completely change his approach and mindset at the plate. Just don’t be stunned or disappointed when he begins the season 0-for-5 with runners in scoring position.

Yet, here we are, after four games, and Luis Castillo’s job is being called into question by pundits, the media, the blogosphere, and possibly even his manager Jerry Manuel — ironically, the man who has put him into position to fail. Castillo, after all, is hitting only .100, and there’s all those LOBs. Surely he’s the reason the Mets have lost two games this year. There are already calls for Alex Cora to take over the second sack. Yes, the same Alex Cora who is a career .245 hitter (.312 OBP), the same man who drove in all of 9 runs last year in 179 ABs, the same Cora who, in his career, has hit .249 with runners in scoring position. Sounds like a great plan.

Hold on, folks. Let’s look at this in perspective — even taking away the fact that Castillo is in the wrong spot of the order. HE HAS ONLY TEN AT-BATS. He’s 1-for-10 thus far. That’s basically two ballgames. Do you know how many times David Wright, Carlos Delgado, Jose Reyes, and Carlos Beltran will get only one hit over ten at-bats at some point this season?

Consider this: David Wright, one of the Mets’ key RBI men, is currently 0-for-4 with RISP. Does that mean Fernando Tatis should be starting at third soon? Danny Murphy is also 0-for-4 with RISP, so should Jeremy Reed (who is hitting 1.000 with RISP) be taking over in left field?

But we’re getting off the point here. The point is, no one should be surprised that Castillo is failing in his current role of #8 hitter. He’s completely misplaced, batting in a position where he frequently appears with runners on base. One of his best skills — bunting — is completely useless batting ahead of the pitcher. It’s a bad fit, and it’s irresponsible to ask him to suddenly be something completely opposite of what’s he’s been for the past 13 years.

I’m not saying you change your entire lineup to make Luis Castillo fit better. Rather, I’m saying you take a look at the skillsets of the players you have, and find a way to make them best work together. Danny Murphy has proven he can hit no matter where he is in the lineup, so how about moving him — a relative puppy — into a position in the order where his potent bat can be better used? Luis Castillo will never be an RBI guy, but Murphy might learn to be. Sure, Murphy might turn out to be a high OBP guy as well, but won’t the lineup be stronger if he’s further down in the lineup, both getting on base AND driving in runs?

Oh and hey, for those not paying attention — Castillo played in only one of the Mets’ losses this year. Alex Cora was the second baseman in the Mets’ loss to the Reds on Thursday afternoon.