Oliver Perez shut out the Cardinals through four frames, then fell apart in the fifth, and the Mets never recovered.

Perez was handed a 4-0 lead thanks to RBI hits by Carlos Beltran, Jose Reyes, Danny Murphy, and David Wright, but gave it all back in the fifth inning, allowing four runs on four hits and two walks. Casey Fossum actually walked in the fourth run, which was charged to Perez.

Though they manhandled starter Todd Wellemeyer, the Mets didn’t collect a hit after the sixth against the St. Louis bullpen, and the score remained tied four-all until the bottom of the eighth. Brendan Ryan greeted reliever J.J. Putz with a line drive to left field that was misjudged by Danny Murphy, who fell flat on his back as the ball soared to the wall. Ryan eventually landed on third with a triple (though it probably should have been scored a three-base error), and was chased home on a double by Rick Ankiel. Ankiel took third on a fly ball by Albert Pujols and scored on a sac fly by Ryan Ludwick.

Carlos Beltran nearly scored the go-ahead run in the top of the 8th. Standing on second base with one out, Beltran tagged up and ran for third on a fly ball by Ramon Castro. Third baseman Joe Thurston tried to quickly catch the ball and slap the tag on Beltran, but in the process the ball flew toward the pitcher’s mound. Beltran alertly raced for home, and would have scored had he (a) slid; (b) barreled over Yadier Molina; or (c) not slowed down within the last 5-10 feet of the plate. Unfortunately, Beltran wasted a great head’s up, hustling effort by slowing down and standing up, and in a bang-bang play, Molina tagged him out as Beltran stepped on Molina’s foot instead of the plate.

Iona alum Jason Motte was credited with the win. He threw one pitch that resulted in two outs thanks to Beltran’s aggressive running.

Gary Sheffield ripped what should have been a single up the middle as a pinch-hitter in the ninth, but second baseman Brendan Ryan was positioned directly behind the bag and handled the sizzler easily.

It wasn’t a good night for Murphy, who in addition to the misplayed liner in the fateful 8th, also was picked off first by Yadier Molina and tagged out at home when he (also) failed to slide on a play at the plate.

Ankiel’s mustache is ridiculous. He reminds me of a player (pick one) from the early 80s. Jerry Martin? Mike Vail?

Mets try again at 8:15 PM in St. Louis tomorrow night. John Maine goes against Joel Pineiro. The game will be carried on TV by ESPN and also broadcast on WFAN and XM 187.

The New York Mets visit St. Louis for the first time in 2009 to play the Cardinals in a three-game series.

Which Ollie will show — Dr. Perez or Mr. Hyde? Nobody knows. Wellemeyer is a prime example of why Dave Duncan cannot be paid enough to be an MLB pitching coach.

Will John Maine ever get past the fifth inning? Pineiro, another scrap heap success story for Duncan’s resume, has a perfect 2-0 record but a 5.40 ERA and a 1.80 WHIP thus far. Last year, the Mets battered him for 21 hits, 2 homers, and 9 runs in 9 innings, so perhaps this can be the game in which they finally send some runners home.

This is a day game, 1:40 PM start. Before the season, I predicted Livan would be the Mets’ third-best starter before it was all said and done. He’s currently #2, which is as much a credit to Hernandez as it is due to the erratic performances of the other Mets starters. Lohse is off to a hot start, with two wins and a 2.57 ERA. Lohse was 1-1 vs. the Mets last season.

The Mets are hitting .236 with RISP, with David Wright going 2-for-13 by himself. Wright, however, is 5-for-7 lifetime against Wellemeyer, and could shake his slump in the opener. Luis Castillo is currently leading the Mets with a .389 AVG while Ryan Church leads the team with 6 doubles, a .477 OBP, and a 1.018 OPS.

The Cardinals still have Albert Pujols, and surround him with a fairly balanced attack of LH and RH hitters. Ryan Ludwick is so far showing that 2008 was not a fluke, leading the Cardinals in the three major offensive categories. He’s batting .405 with 5 HR and 15 RBI through 10 games. However, another player to watch is 3B fill-in Brian Barden, who has slugged 3 dingers and 19 total bases in 22 ABs and is hitting .409.

Hard to say which way this series will go. Much depends on the efforts of Perez and Maine, who have become the poster children for inconsistency. 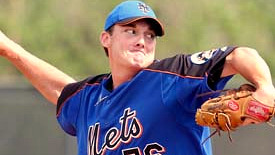