Mets Game 15: Loss to the Cardinals

The Cardinals completed a three-game sweep of the Mets, by a score of 12-8. It wasn’t even that close.

After six innings, the Mets trailed 11-3, but they were able to mount something of a comeback, scoring two in the seventh and three in the eigth on home runs from Ryan Church and Carlos Beltran.

Wow … where to begin? If there’s a silver lining, it is that the Mets didn’t roll over and play dead. Despite being down 11-2, they continued to chip away, scoring five runs in the 7th and 8th frames. But it was too little, too late.

Carlos Beltran is as hot as he can be, and putting him in the #3 spot now is absolutely the right move — he is, hands-down, the Mets’ best hitter right now. If only he could stay this hot for more than a two- or three-week period (fingers crossed).

I made fun of Jerry Manuel’s decision to bat Alex Cora second in the order. Naturally, Cora gets two hits and reaches base four out of five times, so it’s my turn to eat crow. That Jerry Manuel is some kind of genius, eh? (Though, I vaguely remember Argenis Reyes pulling a similar feat out of his butt last year, never to repeat it, yet finding himself entrenched in the two spot.)

Beltran is currently the Mets’ best hitter, but Ryan Church is not far behind as second-best.

I keep looking at the averages of Jose Reyes and David Wright — both of whom are over .310 — and shake my head in wonderment. Must be the new math, because it feels like they’re both closer to .250.

I’m purposely not discussing the specific details of the game … how about we just turn the page?

The Mets return to Citi Field to host the Nationals in a weekend series beginning on Friday night at 7:10 PM. Johan Santana takes the hill against Scott Olsen. If the Mets don’t win this “gimme” then it’s time to panic. 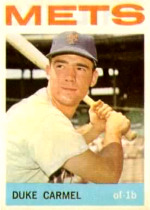 According to MetsBlog, this is today’s starting lineup:

Both Danny Murphy and Luis Castillo get a rest. Strange to see Murphy sitting today against RHP Kyle Lohse and not tomorrow against LHP Scott Olsen. Would Jerry Manuel sit Murphy two days in a row?

Is the Bullpen Overused?

A recent article on the SNY website suggests that the Mets could already be burning out their bullpen.

A novel thought … and something I suggested on several occasions last year.

Is it possible that the Mets’ bullpen woes last year were not solely due to the personnel, as every pundit other than yours truly assumed? Is it, in fact, possible, that some of the responsibility could be placed on the shoulders of Jerry Manuel?

For those interested, the first edition of Bullpen Blueprint is now available for download. It may help you understand why the Mets came up short for two consecutive seasons. Download it here (it’s free!).

“JFro” of FanNation says Jerry Manuel Must Be Fired, Now.

Is Lenny Dykstra a brilliant, wealthy businessman or a check-bouncing shyster? Read this ESPN article on “Nails” and decide for yourself.

Sam Borden of SNY suggests the Mets bullpen is being burned out.

The New York Times has an interesting article on the unfilled, expensive seats behind home plate at both Citi Field and Yankee Stadium. Dave Howard is “not worried” (but is he concerned?).

The Times also has a profile on Omir Santos, the latest version of nondescript, wide-shouldered, backup AAAA catcher on the Mets’ roster. Regardless of what Ben Shipgel writes, my eyes tell me Santos has a strong arm but is sloppy at receiving pitches (minor detail, I know). He lost at least a half-dozen strikes catching Nelson Figueroa last Sunday.

Don’t look now, but there’s yet another “team to beat” in the NL East. Yee ha.

While traveling, I missed this hilarious post on “Melissa Alano” at IMFM … it’s still relevant and has wonderful illustrations.

Matt Cerrone of MetsBlog is right on with his criticism of Jerry Manuel’s “gangstas”. It’s high time to see some ferocity on the field, Ray Knight style.

Adam Rubin has some minor league updates, with a highlight on sidewinding lefty Roy Merritt.

Priced out of the Citi has three fine lists (and everyone likes lists, right?) as well as a snarky suggestion to bring back the 80-pitch drill.

In his article  “Paint the Wall Blue Already,” David Lennon says, “Now that I’m in St. Louis, I just passed Busch Stadium, and imagine this if you will — the ballpark’s color scheme is red. Cardinal red, everywhere. Hard to believe, I know. Not sure why they resisted the urge to go with blue, black, orange or lavender. Pretty radical, these Midwesterners.”

MetsToday guest-poster John Fitzgerald is uploading a bunch of  outtakes from his TV show “Playing for Peanuts” to the web. In one of this week’s new clips, former Mets 2B Wally Backman explains that he spent the 1983 season living in an RV in New Jersey. Classic:

Where They Are Now: Darren O’Day

He’d been gone only hours, but Darren O’Day already appeared in a game for the Texas Rangers, facing Kevin Millar in the 11th inning last night against the Blue Jays.

O’Day was so new they didn’t have a uniform for him, so he wore Kason Gabbard’s jersey. Yes, O’Day went into the game with the name “Gabbard” stitched across his back.

“I got off the plane in the eighth inning and had to go through customs and all that jazz,” O’Day said. “The traveling secretary was texting me back and forth. We originally planned to go to the hotel and he said ‘Go to the field, we might need you.’ I got here, got on a uniform and went out there.”

O’Day shook hands and introduced himself to his new teammates in the bullpen, immediately prior to warming up.

Unfortunately for Darren, Millar ripped a game-winning single off of him to deliver a victory for the Jays.

“Gabbard I thought was a left-handed pitcher and he came in throwing sinkerballs, side-armed right-handed, so I was a little confused at first,” Millar joked.