The red-hot Mets blew out the Nationals to win their second consecutive game.

New York’s struggles with runners in scoring position are a distant memory, as the offense came through with four base hits out of eleven tries (.363) with RISP in this contest. Ryan Church led the way with two hits and three RBI, and Carlos Beltran extended his commanding lead over all other NL hitters by going 3-for-5. The Mets hitters exploded for five runs in the first three innings off starter and loser Daniel Cabrera.

Mike Pelfrey stepped up and came through with a strong performance, pitching into the 6th inning for the first time this season. He needed a little help finishing the inning (Sean Green came on for the final out of the sixth), but nonetheless Big Pelf allowed just two runs on six hits and three walks in 5 2/3, lowering his ERA to 6.32.

Bobby Parnell pitched a scoreless seventh, and Brian Stokes finished up the game with two scoreless frames of his own. 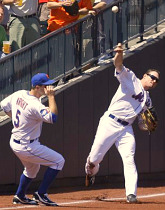 In the initial inning, Danny Murphy made an outstanding sliding catch of a Texas Leaguer off the bat of Ryan Zimmerman, then threw a strike to first base to double up Anderson Hernandez, who was running on the pitch.

Just prior to exiting the game, Pelfrey got 14 consecutive outs on ground balls. With that kind of effectiveness with his sinker, he should eventually learn to be more efficient (95 pitches in this game). For example, Anderson Hernandez saw eight pitches leading off the game before singling, and later, AHern worked a walk off Big Pelf. That is exactly the kind of hitter Pelfrey should be retiring instantly (which he did, in the fifth, getting a groundout on his second pitch to Hernandez).

Beltran is now hitting .415. He is simply unconscious.

The Mets go for a sweep of the Nationals on Sunday afternoon at 1:10 PM. Oliver Perez (or is it Hyde?) goes against rookie phenom Jordan Zimmerman (no relation to Ryan, or Roy, for that matter).

Adam Rubin at The Daily News is reporting that the Mets have signed Mike Lamb to a minor league contract.

Lamb, 33, spent spring training with the Brewers. He hit a combined .235 with one homer and 32 RBI in 272 at-bats with Minnesota and Milwaukee last season. He’s played 446 career major-league games at third base and 255 at first base.

On a somewhat related note, the Mets have also re-signed Nelson Figueroa.

Presumably, both will be sent to AAA Buffalo.

Born Gordon Blaine Beatty in 1964, Blaine Beatty pitched all of 7 games and 16 IP for the Mets — 2 appearances in 1989 and another 5 in 1991. He was a lefthanded pitcher in the wrong place at the wrong time — this was when the Mets had starting pitchers such as Doc Gooden, Frank Viola, Ron Darling, Sid Fernandez, Bob Ojeda, David Cone, and Sid Fernandez. Heck, their staff was so deep, both Rick Aguilera and Kevin Tapani were dead weight.

Beatty, however, was probably better then than Jonathan Niese is now — an intriguing thought, eh? A 9th-round pick of the Orioles out of Baylor in 1986, Beatty went 11-3 in the NY-Penn League that year, then 17-6 combined at A and AA in ’87. He was traded to the Mets in return for Doug Sisk — which in itself was enough of a contribution to the organization — and posted a 16-8 record at AA Jackson. Through 11 seasons in the minors, Beatty was an impressive 121-69 with a 3.26 ERA and 1.20 WHIP. Looking at those numbers, and his southpaw status, and it’s hard to believe that those 7 games in the orange and blue comprised his entire MLB career. Today, he’d be a blue-chip, untouchable prospect.

On Thursday, Mets manager Jerry Manuel intimated that each of his starting pitchers not named Santana had one more chance to prove their worth in the rotation.

On Friday, when asked for more details regarding this ultimatum, Omar Minaya’s response was:

“Did Jerry just say that today?”

As David Lennon wrote, “Of course, Manuel says a lot of things that don’t actually end up happening.” — so perhaps Thursdays threat was an empty one. Last year, people conveniently forgot about many of Manuel’s “promises” (ex. his promise that the core regulars would get regular rest) — funny how a few losses can turn a buddha into a babbling buffoon.

I’m not sure what’s more disconcerting — the fact that Minaya and Manuel are clearly on different pages or that Manuel’s act is growing old so quickly.