The Mets got all the runs they needed during a first inning explosion, capped off by a grand slam off the bat of Omir Santos.

John Maine protected the five-run lead through six strong innings — his longest stint of the season — allowing only one hit, three walks, and an earned run. He struck out four and threw 94 pitches.

Jets’ first-round pick Mark Sanchez threw out the ceremonial first pitch … and looked like a girl doing it. He admitted later that he wasn’t much of a baseball fan growing up. Still, you’d think a quarterback would at least look decent throwing a baseball. Weak.

Are my eyes deceiving me, or are those obnoxious Citi Field sleeve patches growing?

David Wright was the only Met with more than one hit. He went 2-for-4 including a monstrous, 408-foot triple to dead center, and looked much improved at the plate. Wright also made several stellar plays in the field.

Santos’ slam was his first big-league homer. He’s beginning to make the Mets wonder why they’re paying Ramon Castro $2.5M, and is making a strong case to stay on the roster when Brian Schneider returns.

Carlos Delgado sat out this game with hip pain, and Fernando Tatis filled in at first base. Alex Cora came on late in the game in place of Luis Castillo, who suffered back spasms.

J.J. Putz threw a scoreless eighth inning but expended 21 pitches in the process. Frankie Rodriguez closed things out in a non-save situation, but also threw more than twenty pitches (24 to be exact). One must wonder if both will be available if needed tomorrow night.

Prediction: Dan Warthen Will Be the First to Go

The Mets are 8-10. They’re in fourth place, but only 3 games behind the struggling first-place Marlins.

This week, the Mets take on the Marlins and the Phillies. A strong showing can put them back into first place. But if they struggle, the Mets could end the week 5 or 6 games back. If that happens, heads could start rolling.

Who gets fired? Let’s first look at who will NOT be fired:

Pitching is the Problem

We’re all well aware of the Mets pitching problems. Johan Santana has been dominant, but the other four starters have been inconsistent at best and downright awful at times. Santana is 3-1 with a 0.70 ERA, while Pelfrey, Perez, Maine, Hernandez and Nelson Figueroa are 3-5 with a 7.32 ERA.

What are the Options?

When a team is struggling, the easiest move is to do nothing. The second easiest move is to fire a pitching or a hitting coach – the GM and manager save their jobs and no players are traded. At best, the move could shake things up enough to ignite a team. At worst, nothing really changes. It’s a fairly clean process and there is only one victim. Just ask Bob Apodaca or Rick Down.

So how does an organization go about firing a pitching coach? If you’re the Mets, you lay the seeds early. From today’s NY Times Blog:

“The Mets are high on Buffalo’s pitching coach, Ricky Bones. Should they decide to demote Perez, it would be interesting to see whether Bones could correct Perez’s flaws while also easing his psyche. No one enjoys being sent to the minors, especially those who have had success at the major-league level. Myers was humbled by the demotion. The Mets hope Perez would be, too. But that happens — the Mets’ worst-case scenario — Perez will get one more start to prove he belongs in the big leagues.”

Geez, Ricky Bones may be a great pitching coach, but this reeks of a leak from somewhere within the Mets front office.

To recap, here’s what the Mets have done:

If Perez gets sent down, you can assume the Mets will still be struggling. Fans will be calling WFAN and demanding that SOMETHING be done.

Let’s say Perez has a few dazzling starts in AAA. It’s not hard to imagine that Perez could fan 15 batters in AAA – he really only has to stay in the strike zone and he should dominate down there.  When that happens, word will start to circulate that Perez is back on track. Ricky Bones’ name will be mentioned in the papers, on SNY and on WFAN.

Oliver Perez will return from AAA with Ricky Bones. Dan Warthen will be out. And ownership can say they gave the fans what they asked for.

Of course, Warthen’s job is safe if the Mets go on a winning streak. But it’s nice to know the front office is ready to make him a scapegoat, just in case.

The Mets and Marlins go at it for a three game set beginning today at 7:10 PM, a prelude to the Flushing Nine’s first encounter with the World Champion Philadelphia Phillies this upcoming weekend.

The Fish lost two heartbreakers in the final innings to the Phillies on Friday and Saturday, then were blown out 13-2. In the Friday night contest, closer Matt Lindstrom allowed 7 runs on 3 walks and 4 hits (including 2 HRs) in two-thirds of the ninth inning en route to his second blown save of the season. They have lost six games in a row, but still lead the NL East by a slim margin. Their incompetence has miraculously allowed the stumbling Mets to gain in the standings over the last week (New York is now 3 games out of first, despite an 8-10 record).

In other words, the Marlins are down; it is up to the Mets to kick them or let them up.

The Mets are coming off a series win over the lowly Nationals, but are 2-5 over the last week. Their starting pitchers not named Santana have been awful and though 5 of the 8 starters in the lineup are batting .300 or better, their performance with runners in scoring position remains dismal. The lone bright spot is Carlos Beltran, who is absolutely unconscious at the plate — unfortunately, he’s also unconscious on the basepaths, as he’s been forgetting the NL allows sliding.

What will happen in the next few days is anybody’s guess. At the All-Star Break, we may look back at this series with the Marlins as a turning point, or defining moment, in the Mets’ season — good or bad. 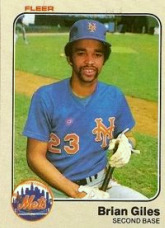 Giles epitomized everything that was wrong with the organization in 1983, but you have to look at the season before to understand the whole story.

In 1982, a 22-year-old firecracker named Wally Backman fought his way into 96 games, batting mostly at the bottom of the order, and finished the season with a .272 AVG and .387 OBP (73 points higher than leadoff man Mookie Wilson and tops on the team by a longshot). However, the young Backman made 14 errors, which did not sit well with a hierarchy that previously valued the Gold Glove of Doug Flynn.

So in spring training of 1983, instead of installing him at second base with the hopes that the hardworking Backman would eventually improve defensively (you know, kinda like Dan Murphy in LF this year?), they instead made the position an open competition, and finally settled on Brian Giles as the starter. Mind you, this was the 1983 Mets, a team going nowhere fast.

In 145 games for the last-place Mets, Giles — often hitting 6th or 7th in the lineup — batted .245 with a .308 OBP and .298 SLG. These numbers actually look decent next to his double play partner Jose Oquendo, who as a 19-year-old rookie batted .213. On the field, Giles led the team in assists with 390, made 14 errors, posted a .980 fielding PCT, and turned 90 of the Mets’ 171 DPs. Meantime, Wally Backman was igniting Davey Johnson’s Tidewater Tides toward a AAA title. The following season, Giles and Backman switched places, and Giles did not return to the bigs until 1985, with Milwaukee.

After 1983, Giles played in only 88 more MLB games, finishing his career in Seattle in 1990 — five years prior to the MLB debut of the “other” Brian Giles.

No Worries About Wright

David Wright is leading the National League in strikeouts and hitting only .271. However, I see no reason for concern, since this is Wright’s M.O. for April. He is a notoriously slow starter, and we’ve come to expect subpar numbers from him in the first month of the season.

But don’t listen to me, check the stats — his career batting average in April/March is .283, a full 25 points below his career average overall. Strangely enough, he has walked more times (74) in the initial month than in any other (covering 114 games total).

Last year, Wright started off hot, then cooled off quickly — he was hitting only .262 after 32 games.

Mets Desperate for a LOOGY

Over the winter, the Mets succeeded in overhauling their bullpen. Whether the change of faces will make a difference remains to be seen, but nearly every reliever on the team this time last year has been replaced.

Every one, that is, except for Pedro Feliciano, the Mets’ lone lefty.

Once piece missing from the overhaul, though, was the acquisition of a second lefty, or Lefthanded One Out Guy (LOOGY), to help out Feliciano. An extra lefty is especially necessary in the NL East, where the Braves and Phillies both send up dangerous lefthanded hitters.

Thus far, the Mets have auditioned Jon Switzer, Ron Villone, Casey Fossum, Valerio De Los Santos, Heriberto Rueles, and Tom Martin. Today they begin the tryout of 40-year-old Japanese hurler Ken Takahashi — presumably as a test for the upcoming weekend series against the lefty-heavy Phils. The Mets are desperate to find a somewhat reliable lefthanded option to team with their incumbent LOOGY.

But there’s a small problem: Pedro Feliciano is a shaky option himself.

Over his career, Feliciano has done a good job of retiring the Phillies’ top LH hitters — Ryan Howard has a .190 AVG against him and Chase Utley has hit .174. Feliciano has also done fairly well against switch-hitters Shane Victorino (.071) and Jimmy Rollins (.278). But, the rest of the current Phillies who have faced him before are hitting .500.

That’s not a huge deal, though, since there are a lot of “1-for-2s” there. A larger sample size may change those numbers drastically for the better.

Thus far this year, Feliciano is doing pretty well, with 10 Ks in 7 innings, and holding opposing batters to a .222 batting average (lefties: .176, righties: .300). He had a similarly strong start last year, posting a 0.97 ERA and 9 Ks in 9 IP in April. After that, though, his performance was inconsistent.

So while some believe the Mets need a secondary lefty for the bullpen, the reality may be that they need a primary lefty.

Anthony Rieber of Newsday alerts Carlos Beltran to the fact that his dad’s senior softball league does not allow sliding, but the National League does.

Andrew Vazzano of TheRopolitans regurgitates a quick Q&A on Ken Takahashi he did with BaseballDigest.com‘s Japanese specialist Patrick Newman. Guess what? Takahashi was NOT particularly strong against LH hitters. Swell.

Wallace Matthews tells the tale of the two players known as Ryan Church.