For the second straight time, the Mets beat up on Ricky Nolasco, lighting him up for four runs on six hits and three walks in five innings of work. Gary Sheffield ripped a two-run triple in the initial inning, then Alex Cora and David Wright chased home runners with RBI singles in subsequent innings.

The Fish fought back with a couple runs in the fourth, thanks to a two-run homer by Jorge Cantu against Mets starter Livan Hernandez, then cut the deficit to one when Jeremy Hermida grounded into a fielder’s choice off Bobby Parnell (run charged to Hernandez).

Though the game was close, it seemed as though the Mets would wrap up this one easily, as they needed only to get through the seventh without a hitch, then unleash the dogs known as J.J. Putz and Frankie Rodriguez to bring the win home.

But it was not to be.

Instead of bridging the gap, middle man Sean Green shat the bed, allowing four runs in the seventh, highlighted by another dinger by Cantu, this one of the three-run variety. Since the Mets’ lineup more or less went to sleep after the fifth frame, there was no chance for a comeback win.

Alex Cora was 2-for-2 with a walk, with both of his hits being what ballplayers describe as “squibs” — basically, bloop hits fought off somewhere between the fists and the trademark of the bat, that fall barely out of the reach of infielders. But hey, they are line drives in the book.

Speaking of, there seemed to be a lot of cheap bloop hits and seeing-eye grounders from the Mets’ side in this game. Not too many line drives — not even for outs.

Cora was the only Met with more than one hit, and he drew one of NY’s three walks. So much for my theory that it makes no sense to bat him near the top of the order.

Although he allowed an inherited runner to score, Bobby Parnell came up big in the sixth, getting a popup from Dan Uggla and striking out Cody Ross to end a tense threat by the Fish.

Sean Green, not so big.

Leo Nunez has letters on the fingers of his glove reading “EL CD”. I don’t *think* that is a model number, but also not sure what it might signify. Electrolytic conductivity?

The rubber match pits Johan Santana vs. Josh Johnson in pitchers’ duel part deux. Game time is 1:10 PM. If by chance you can call in sick to work, or are out of work, email me as I’m going to the game and have an extra ticket (the ticket’s free, but you’ll be obliged to buy me a beverage and a pulled-pork sandwich). As such, do not expect to see a game recap until later in the evening. 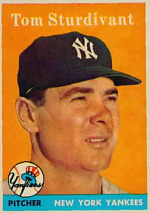 For a brief period, Tom Sturdivant was a dominant starting pitcher for the New York Yankees, going 32-14 from 1956-57 and helping the Bronx Bombers to the World Series in each year. The big righthander relied on outstanding control and a unique assortment of pitches — he’d start off batters with a knuckleball, and continue from there with a hard-biting curveball and steaming fastball. The break of his curveball was so sharp he earned the nickname “Snake”.

However, he suffered an arm injury in ’58 and eventually lost his pinpoint control. The Yankees sent him to their version of Siberia — Kansas City — and he bounced from team to team until 1964, when he landed with the Mets.

By the time he reached the Mets, however, he was at the end of the string. He appeared in 16 games in ’64, all in relief, and posted one save and a 5.97 ERA. There was one interesting note to his brief stint with the Metropolitans, though — he pitched 2 2/3 scoreless innings in one of the longest games in baseball history, a 23-inning, 7 hour, 23-minute affair with the Giants on May 31 (by the way, it was the second game of a doubleheader!).

I’m too young to have seen Sturdivant pitch in the bigs, but I distinctly remember him being one of those guys who always appeared at Old-Timer’s Day. When are they ever going to bring back that event?

One of the forgotten pieces of the J.J. Putz deal — Jason Vargas — has gotten off to a strong start in the hitter-friendly PCL.

It’s easy to forget Vargas was part of the deal … most people forgot he was still in the Mets’ organization, after suffering several injuries that knocked him out of action over the past few years. And he was one of, what, 19 players sent to Seattle? OK, maybe it wasn’t 19, but it sure felt like it.

Vargas just threw six scoreless innings , striking out 8, for the Tacoma Rainiers in a 14-0 rout over the Salt Lake Bees. (BTW, another player from that trade, Mike Carp, went 4-for-5 with 4 RBI in the same game).

Though he didn’t perform well as a New York Met, it could be partially due to being less than 100% in his two starts in the orange and blue. Now, it appears he’s finally healthy (great timing) and beginning to live up to the expectations set as a rookie for the Marlins in 2005. In four games started this year, the 26-year-old Vargas has pitched 21 2/3 innings, struck out 22, walked 8, allowed 15 hits, and has a 2.49 ERA.

Sure would be nice to have a lefty starter with those kind of numbers waiting in AAA about now, wouldn’t it? Oh well, at least the eighth inning is locked down — you have to give up something to get something.

The Freddy Garcia Experiment has officially ended, as the Mets released the righthander.

Garcia never could get his velocity back up to a point where he could succeed at the MLB level — which is a major problem for someone who spent his career as a power pitcher. He might have been able to convert into a crafty competitor, but not throwing 83-84 MPH — only Jamie Moyer gets away with that.

Regardless of the outcome, I still believe that this was a sound gamble on the part of the Mets. In the end it cost them only a minor league contract packed with incentives that never were reached.

Look at it this way: the Mets spent very little in gambling on Livan Hernandez and Freddy Garcia, and so far their success rate is 50%. Also consider that they have very little in the way of MLB-ready starting pitching prospects, so it’s not as if Garcia was stealing innings from anyone. If anything, Dillon Gee and Jonathan Niese probably need to be back down at AA — both are struggling mightily in Buffalo.

By the way – taking Garcia’s place on the roster is Nelson Figueroa, who is pitching tonight against Kevin Mulvey of the Rochester Red Wings.

At Jimmy Scott’s High and Tight, former Met Eric Valent tells the story of being the 25th man on the roster, playing in Japan, and, eventually, transitioning from player to coach to scout. Insightful stuff.

Brad Lidge is nursing a sore knee and is “day to day”. That could be good news for the Mets, with the Phillies series coming up this weekend.

Kerel Cooper at OnTheBlack explains why the Mets’ weekend series win over the Nationals left him disappointed.

Metstradamus explains how you can have a Citi Field ticket for a seat that doesn’t exist — though you will have a cupholder.

Coop at MySummerFamily isn’t worried about Oliver Perez’s maddening start to the season — explaining that he started out just as inconsistently in ’08 and ’07, and is bound to come around.

Andrew Vazzano of TheRopolitans posts the results of his Twitter poll, “What to Do with Omir Santos?”

Adam Rubin is reporting that Freddy Garcia is NOT the solution for the Mets’ starting rotation, and, he is leaning toward retirement.

Garcia has a 8.18 ERA with the AAA Buffalo Bisons, and is struggling to keep his fastball in the 80s. Last night he gave up six runs in the fifth inning, including a grand slam by former Brave Ryan Langerhans.

“Maybe I want to try it one more time,” he told the newspaper. “If I don’t feel the way I’m supposed to be feeling right now, I don’t know. I have to make a decision what I’m going to do. I don’t know yet. Hopefully next time I’ll feel better. I want to wait for tomorrow and see how I feel. I’m working really hard to try to get right but my shoulder doesn’t respond. I’m going to try my best and work hard. If not, I guess I’ll go home. I don’t know. That’s it, man.”