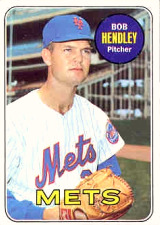 Bob Hendley was a fairly nondescript pitcher from the 1960s who started 13 games for the Mets in 1967, his final year in MLB.

Hendley did have one brush with fame, though. On September 9th, 1965, as a member of the Chicago Cubs, Hendley pitched a brilliant one-hitter against the Los Angeles Dodgers. Unfortunately, opposing pitcher Sandy Koufax threw a perfect game. Tough luck. Five days later he locked horns with Koufax again, but this time was the victor, throwing a four-hitter en route to a 2-1 win.

Hendley did not have any similarly interesting outings as a Met, though he wasn’t terrible, either. Over 15 games (13 starts), he had a 3-3 record, 3.44 ERA, and two complete games. In other words, he’d be the Mets’ #2 starter if he were on the team today.

There are obvious problems for the Mets right now, such as David Wright and Oliver Perez. But some others are less hyped, yet just as concerning. For example ….

The Mets lost yesterday despite having their ace pitch brilliantly and despite the fact that the Marlins’ best two hitters (Hanley Ramirez and Dan Uggla) were out of lineup. If they can’t beat the Fish under those circumstances, then how CAN they beat them?

Besides wasting a stellar effort by Johan Santana yesterday, the Mets have more or less wasted a vicious hot streak by Carlos Beltran, who hit .395 for the month of April. Those types of streaks come along only once or twice a season, and my eyes tell me that Carlos is emerging from his unconsciousness. The numbers support it as well — though he has a 6-game hitting streak, Beltran is hitting only .266 over that span.

Frankie Rodriguez is on pace to collect less than half as many saves as last year’s record-breaking 62.

The Mets have yet to win the third game of a three-game series (oh-fer-seven).

The Phillies have a winning record, are in second place, and are 1.5 games out of first — despite injuries to Cole Hamels, Brad Lidge, and Carlos Ruiz, and despite Jimmy Rollins’ .207 batting average for the month of April (he was below .200 until yesterday). They’re also winning despite carrying Miguel Cairo on the roster and using Chan Ho Park as their fifth starter.

The Braves are ahead of the Mets as well, despite losing Chipper Jones, Brian McCann, Tim Hudson, Jorge Campillo, Tom Glavine, and Garret Anderson for various stretches in April.

Considering the above, what happens when the Phillies and Braves get healthy? What if Carlos Delgado and/or Luis Castillo hit the DL for an extended stint? I fear the worst for the Mets is yet to come.

Several members of the media question the emasculation of Ramon Castro, including Ed Coleman.

Similarly, Adam Rubin believes Jerry Manuel is burning his bridges with Castro, and doesn’t understand why he was tweaking Ryan Church earlier this spring, either. Oh, he also thinks Manuel is burning out the bullpen. Funny how those things are more noticeable when you’re losing.

Mike Vaccaro also wakes up and smells the coffee, pointing out that Jerry Manuel had a “personality conflict” with Frank Thomas in Chicago, and wonders if the banishment of Ramon Castro is a prelude to challenging Carlos Delgado or David Wright.

Enough negativity … how about something positive? The Yankees are slashing their ticket prices. Oh, wait, those reductions are only for the highest-priced, premium seats — the ones that, ironically, are in the direct focus of the centerfield TV camera.

Maybe today’s video will make you smile. It is Wally Backman speaking from his RV, about everything from the ’86 Mets to his theories on the DH.

Use the left/right arrows to jump from clip to clip:

There were other reasons the Mets lost yesterday, but the magnifying glass is on Jerry Manuel’s unbelievably illogical decision to replace Ramon Castro with Omir Santos in the bottom of the ninth, with two outs and the bases loaded.

Manuel stated this with conviction and clarity, and looked every writer in the eye as he said it. It was still absolute idiocy.

Second is the just as obvious: Castro already had two hits on the day, both off of Josh Johnson, who BY THE WAY was throwing in the upper 90s. In fact his 97-98 MPH fastballs were only a mile or two slower than Matt Lindstrom’s 98-99 MPH heaters.

Third is the nearly as obvious: Santos was “cold”, meaning, he’d been sitting on the bench all game. Pinch-hitting is hard enough, but to come into a game late and face a guy throwing that kind of gas … well, it’s damn near impossible to get a hit.

Fourth is the not-so-obvious: Omir Santos was unprepared to pinch-hit. He was so sure he had no chance of getting into the game at that point, he was somewhere in the clubhouse (getting undressed? head start on the caterer’s table? on the can?).

What this move came down to was Jerry Manuel deciding that he’d take a page out of Joe Torre’s book and “play a hunch”. If it worked, he’d be praised in the press as an absolute genius. If it didn’t, no matter, he’s still a media darling and they’ll give him a pass. Heck, if he explains himself clearly and looks everyone in the eye, no one will question how blatantly stupid a move it was. This Jedi mind trick stuff has been working since last June, after all.

Unfortunately for Jerry, this blogger is calling you to the carpet. My guess is the rest of the media will follow suit, and shortly.

Let’s not forget that this time next week, Omir Santos will be in Buffalo and Ramon Castro will still be a New York Met. Manuel has more or less sent the message that he does not trust in Castro’s skill at the plate in a big spot — how is that going to affect Castro’s psyche in future situations? How would YOU feel, if you were Ramon Castro?

By the way, Jerry Manuel is signed through 2010, and will collect $1.5M for this year and next. Willie Randolph is due to receive $2.25M this year. The chance that the Wilpons will eat almost $4M AND pay someone new is next to nil. So get used to the idiocy.