Johan Santana’s velocity is down, as is his command. One thing I notice is his arm dragging behind slightly — it’s out of sync with his hips, and as a result the hips and legs are driving forward a hair too early, and therefore not helping to power the ball. The question is, why is his arm behind? Is it a timing issue, or is there something physically keeping him from firing his hand forward at its usual speed? For example, does he suffer from a mild shoulder injury?

The command problem is equally concerning — often, problems with location are the result of an elbow issue, and we know Johan’s elbow was barking in late February and early March.

Santana is a “touch and feel” pitcher, in that he relies heavily on his grips on the ball and finger pressure at the release of a pitch. The muscles and ligaments in the forearm and elbow are what control, and provide strength to, the fingers.

To get a rough idea of how the forearm and elbow affect the fingers — and ultimately, a pitcher’s command — simply lay your arm down on a table, palm up. Leaving your arm and hand flat on the table, lift only your middle finger up toward the ceiling. You should feel a bit of tension in several areas of your forearm, including one or two spots near your elbow (both near your elbow bone resting on the table and on the opposite side that is facing the sky).

For almost all pitchers, the middle finger is the “power finger” — the one that is used for applying specific pressure to the ball to make it sink, dive, and break. That’s because it is generally the strongest and also because it is usually the last finger to be in contact with the ball before it’s released. So, if there is an issue with the forearm and/or elbow — such as pain, tightness, soreness, or weakness — then the pressure applied by the middle finger is going to be affected. So now you understand the general rule of thumb (pardon the pun) that an elbow injury can affect command, but not necessarily affect velocity.

In the case Johan, he has had both a loss of command and velocity. From what I’ve seen, he’s also been throwing more pitches, and had a different approach from previous years, in that he’s been more aggressive about getting batters to swing and miss, as opposed to “pitching to contact” on occasion. As a result, he’s been throwing more sliders, which tend to put more strain on the elbow and forearm. Again, this is what my eyes tell me — the propeller heads can crunch the numbers and tell me if my perception is unfounded (though, I don’t necessarily trust the interns recording the pitch types from the press box).

What does it mean? My best guess is that Johan is hiding an issue with his arm. He’s too much of a competitor to use it as an excuse, and he’s too intent on fulfilling the value of his contract and filling the role of “the franchise”, to consider taking off a few starts. He has watched so many players go on the DL, he may feel obligated to pitch through pain — the old concept of the captain must go down with the ship. Or perhaps, it’s simply a temporary thing, something he’s experienced before and doesn’t believe it’s serious, but rather, something he can pitch through.

This is all speculation from a hack blogger / amateur pitching coach. It could be way off. In the end, we may never know what’s caused Johan to fall back to Earth. It may be as simple as him being mortal.

Decisions on Murphy and Martinez 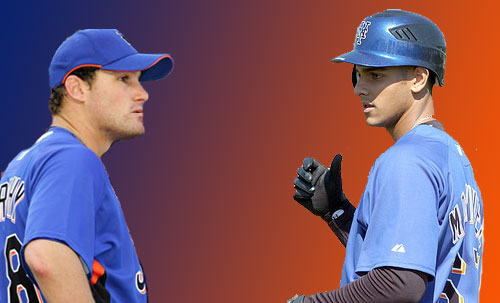 About two weeks ago, we suggested that Dan Murphy and Fernando Martinez might be in competition with each other. At this point, we may have a “winner”, though, before long, both may find themselves in AAA.