You may already know that I’m a former college baseball player and coach, and therefore geeky enough to have an appreciation for listening to an interview with Moby Benedict. For those unaware, Benedict was one of the most successful college coaches of all-time, leading the University of Michigan from 1963-1979. In those 17 years, no less than 25 of his players went on to play in MLB — a fairly stunning accomplishment. After his college coaching career, Moby spent three years coaching the Jamestown Expos in the NY-Penn League (from 1982-1984).

Considering that Moby played for Michigan in the mid-1950s and managed Jamestown in the early 1980s, one would think that he’d be familiar with Fred and Jeff Wilpon. After all, Fred was supposedly a “star” pitcher in high school and college, and Jeff played for the Jamestown Expos in 1983 … or did he?

According to the biography on the Sterling Equities website: 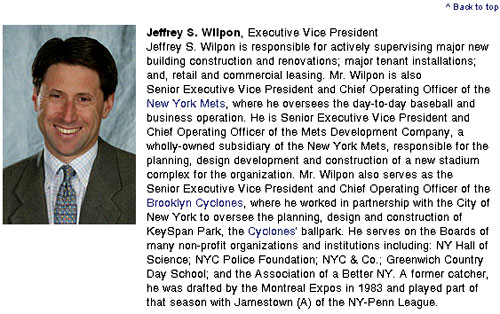 However, if you listen to Moby Benedict tell the story, Jeff never played for Jamestown. Per the interview:

Q: “One of the players you managed while at Jamestown, but Jeff played with you in 1983 at the Jamestown Expos … what can you tell us about Jeff?”
A: “I don’t think he did … the years I was there, and I was there three years, and I don’t recall that he played. No. No — not for me.”

Moby is not a young guy, so you might think that his memory is failing him, or that Jeff was such a poor player that he didn’t leave much of an impression on Moby. Except, you would think that Moby Benedict would remember the son of Fred Wilpon playing for him — even if it were for only five minutes. After all, Fred and Moby were teammates at the University of Michigan, and Fred was extremely helpful to Moby’s baseball program. Indeed, Benedict later mentioned, in regard to Fred Wilpon:

“… he was there at the same time as I was … in fact, I know him well — we were pretty good friends … he gave us a lot of money to re-do our baseball field … he was very, very, very generous … it’s called the Wilpon Baseball Complex … it’s really beautiful … he was very generous, and a very kind man.”

Benedict also clearly remembered that Fred came down with a sore arm while at Michigan, and therefore never pitched for them.

You can listen to the interview here (the Wilpon discussion comes in around the 3-minute mark):

Still, maybe Moby, for whatever reason, forgot that Jeff Wilpon played for him. But there doesn’t seem to be any information, anywhere, that supports the claim that Jeff played pro ball. For example, if you go to the Jeff Wilpon page on TheBaseball Cube.com, there are no stats listed. Neither is Wilpon’s name listed on the 1983 Jamestown Expos page. Baseball-Reference.com reports the same non-info on Jeff Wilpon (nothing for ’82, ’84, either).

Of course, neither of those websites can be considered “official” — so it’s possible that both of those sites have mis-reported the facts and that Moby Benedict mis-remembered his time in Jamestown.

Perhaps I’m nitpicking, but this information is bothersome to say the least. If it’s true that Jeff Wilpon never played pro ball, why does his bio claim that he did? Why would the COO of a billion-dollar company have to lie on his public resume? And what else is he, the Mets, and Sterling Equities lying about?

And for the record, I have never lobbied for the job of COO of the New York Mets. I’m not looking to tear anyone down, either — only in search of the truth.

An alert MetsToday reader pointed me to a Murray Chass article from the September 14, 2004 edition of The New York Times, which includes this tidbit:

Wilpon is the son of Fred Wilpon, the Mets’ owner. Like his father, Jeff was a baseball player as a youngster but didn’t go far. In 1983, at the request of and as a favor to Fred Wilpon, the Montreal Expos drafted Jeff, a catcher. He joined Jamestown of the New York-Penn League but apparently never played before he was released a week or so later. Jeff Wilpon’s name does not appear in the team’s statistics for that season.

So this is old news that has yet to be addressed. Or does being a bullpen catcher count as “playing”?

Castillo In the Two Hole

Bespoketh Jerry Manuel during last night’s postgame, in regard to Luis Castillo:

I’ll tell ya, that Manuel sure knows how to get the most of his talent. I don’t know how many other managers would’ve figured out that the second spot in the order is an ideal spot for Luis Castillo — and to come to such a conclusion in less than 100 games.

By the way, what exactly is Manuel referring to when he says, “we have found a way to fit his game in to what we’re doing” ? That statement insinuates that the Mets have a plan of some sort — a method. Who knew?

The Mets should consider another contract extension … no make that, extensions … for both Manuel and Castillo. Lock these guys up until 2020, before someone else snaps them up.