In this game, a contrast of efficiencies. And we’re not talking about housing. 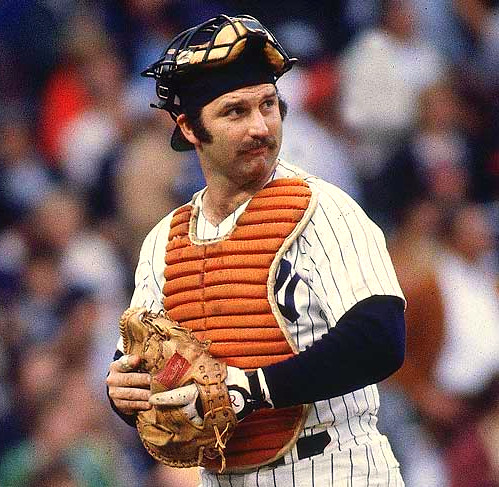 Today is the 30th anniversary of the death of Thurman Munson.

Yes, I know this is a Mets blog but it’s also my blog, and “Thurm” was, hands-down, my favorite baseball player of all time — and the reason I chose to don the “tools of ignorance”. (John Stearns and Jerry Grote are also high on the list — all three were cut from a similar mold.) But enough about me, this is about Munson. If you did not have the opportunity to see Thurman Munson attack, absorb, and often dominate a baseball game, I urge you to seek out old Yankees videos from the 1970s and consider getting Marty Appel’s recent biography Munson: The Life and Death of a Yankee Captain

. Plain and simple, he played the game the way it was supposed to be played.

In the meantime, you can read John Delcos’ recent blog entry about Thurman to get an inkling of the kind of man and player he was (see, I’m not the only Mets blogger recognizing the former Yankee captain!)

Mr. Beltran, take your time — we have a very capable switch-hitting centerfielder doing just fine while you’re on the mend.

Angel Pagan blasted a grand slam in the bottom of the eighth to lift the fans off their feet and the Mets over the Diamondbacks.

For the first time in a long while, the Mets engaged in a game that felt like a wound-up spring, ready to burst at any moment — and came out on the winning end.

The Snakes jumped out to a 2-0 lead in the first 3 1/2 innings, but the Mets pulled off a four-run rally in the bottom of the fourth frame to go up by two. Unfortunately, the Mets had Oliver Perez on the mound, so that didn’t last long. Fortunately, Max Scherzer had nothing, and so the two teams traded scores for the next two innings, and were knotted at five-all until Pagan’s dramatic blast.

Pedro Feliciano earned his fourth victory of the season, as he was the only Met pitcher to retire more than one batter and not allow a run.

Perez took another step backward. Although he allowed “only” three runs and struck out 7 in five frames, he also walked 5 and allowed 6 hits (including one homerun). On several occasions Ollie “improvised” on the mound, playing cowboy and dropping down laredo style for reasons unknown. At least a dozen of his 112 pitches were a good six feet out of the strike zone, and had Brian Schneider scrambling. It was a minor miracle that he threw only one wild pitch and allowed only three runs (and I’m still trying to figure out how he didn’t hit at least two batters). There were several spots where a more disciplined team would have mounted a 3- or 4-run rally. For the second straight evening, we can see why the Diamondbacks are stinking up the NL West.

What a shame to see what’s happened with Max Scherzer this year. Scherzer has struggled with nagging shoulder injuries, and if I’m Arizona I might consider shutting him down at this point. This is a guy who AVERAGED 95 MPH last year, topping out at 98-99. On this particular evening, the Citi Field gun had him at around 92-93, with a couple touching 94. Now, 94 is still pretty damn fast, but a world away from 98-99. In comparison, remember how hittable Billy Wagner became when his velocity dropped from 99-100 to 93-94.

Slowly, these replaceMets are forging their way into the fan’s hearts. I’m beginning to believe that the team will be better off if Beltran, Delgado, Reyes, and the rest of the “cavalry” never return. Some of these guys are taking the bull by the horns and showing the world (and their crepe-hanging manager) that they can play this game. It’s kind of nice to see guys bust it out of the box, rather than make a decision as to whether or not they should run hard.

Speaking of hard-nosed players, my new favorite non-Met is Mark Reynolds. He may set world records for strikeouts and errors, but you have to love a guy on a last-place team diving over the tarp and nearly into the stands to catch a foul ball.

Oh, and how about Clay Zavada channeling his inner Rollie Fingers with that waxed handlebar mustache? When he came into the game I thought I fell into a time warp. And his middle name is “Pflibson”. I smell a fan club sprouting soon. Baseball needs more guys like this in the game. I’d pay to see a battery of him and Sal Fasano.

The Mets and Diamondbacks play the third game of the series at 1:10 PM on Sunday afternoon. Mike Pelfrey goes to the mound against Jon Garland.