Bobby Parnell to the Rotation? 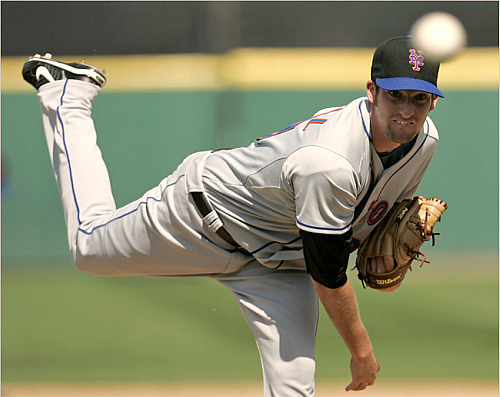 Niese May Be Out for the Year

Minutes after an awkward stretch while covering first base, Jonathan Niese was removed from today’s ballgame with a severe ankle injury. Niese was immediately sent for an MRI, and during the postgame, manager Jerry Manuel said that “…we suspect it to be a tear”.

A “torn” ankle would be terrible, terrible news for the young lefthander, and would certainly end his season. Further, it could knock him out of action for 6-8 months. Let’s keep our fingers crossed and hope that the MRI comes back with a better report than the Mets suspect. Though, what worries me is the Mets have usually erred on the side of optimism.

In addition to losing Niese, Gary Sheffield also left the game after re-aggravating his hamstring. As expected, he’s listed as “day to day”. A few days ago, Jerry Manuel made it clear that Sheffield would not play in day games after night games. Despite this, he allowed Sheff to play after the two had a conversation last night. According to Manuel:

“…. he was very adamant about playing today, that he wanted to play. And the day game / night game for him, normally means that if there is a stretch of games — say we have five or six games in a row, and then we have a day game — then that becomes an issue. But we did not have that type of stretch since he went on the DL.”

Depending on Niese’s MRI, we should expect to see Niese go on the DL and a position player come up from the minors, now that both Sheffield and Luis Castillo are “day to day”.

What a difference a day makes!

Fueled by the support of screaming, sugar-filled children, the Mets delivered an overwhelming win to the Camp Day crowd.

The Mets offense exploded for five runs in the first two frames against starter and loser Kyle Lohse, then tacked on another four in the sixth and eighth innings to make it a laugher.

Nelson Figueroa, who came on to pitch after Jonathan Niese injured his ankle in the second, earned the win and redeemed himself with a stellar 4 1/3 innings of shutout relief. Bobby Parnell earned a rare 3-inning save, striking out 3 and allowing only one hit.

Parnell is now tied with Frankie Rodriguez for the team lead in saves since the All-Star break.

Angel Pagan and David Wright combined to go 6-for-8 with 3 runs and 6 RBI. Pagan had a booming homerun to centerfield and ripped his 7th triple of the year. Despite a paltry 146 times to the plate, only one man in MLB has more triples than Pagan — Michael Bourn, who has 9 in 451 plate appearances. Who needs Jose Reyes and Carlos Beltran when you have Angel Pagan?

Parnell and Figueroa were a combined 2-for-2 with 2 RBI and 2 runs scored.

Rick Ankiel had a difficult time in centerfield during that second-inning offensive outburst by the Mets. He made a diving attempt for a blast by Nelson Figueroa but the ball missed his glove and resulted in a triple — nearly a quadruple, in fact. (Jim Edmonds would’ve had that ball, BTW.) Minutes later he misplayed a low liner off the bat of Angel Pagan, with his glove fingers up instead of down, allowing Figgy to score and Pagan to reach first. And moments after that, Pagan challenged him by going first to third on a David Wright single. Ankiel, I think, had a great shot to nail Pagan, but he hesitated and then took a long windup before unleashing his throw, which was a little too late.

The Mets fly cross-country to face the Padres in San Diego for a four-game series. Livan Hernandez faces Clayton Richard in the opener, which begins at 10:05 PM EST on Thursday night.

Castillo Out, Reyes Out Longer

In case you missed it, Luis Castillo slipped going down the dugout steps and injured his ankle. The Mets are terming it a “mild strain”, and not surprisingly, are listing him as “day to day”.

No, this is not a joke. Castillo really did hurt himself in the dugout, off the field of play. Which begs the question: in this brand new stadium, why are the dugout steps and floor not covered with some kind of porous padding, such as you might find on a running track? I could be completely mistaken, but it looks like the dugouts and steps at Citi Field are bare concrete — which makes cleanup easy but is not the safest platform for metal spikes. Again, I could be wrong — I haven’t been inside the dugouts and am only trusting what I’ve seen on TV and views from the stands. For all I know there is a rubber covering on top of the concrete, or maybe they put down some kind of runner or mat.

But back to Castillo’s injury. With him out, but not on the DL, means Angel Berroa will be getting more playing time, and/or we’ll be seeing Fernando Tatis at 2B. Tatis’ hustle, professionalism, and occasional homerun power are wonderful additions to the lineup temporarily, but if he starts then your top RH bat off the bench is Berroa. Twelve of one and a dozen of the other.

Luckily, this situation is only “day to day” (ha!), which reminds us of another middle infielder whose injury status was once described similarly — Jose Reyes (silly me, I thought he’d be out for the season!). The latest on Reyes is that he’s had a setback, he feels “discomfort” in his leg, and has flown up from Port St. Lucie to be re-examined by the team’s doctors. If nothing else, Jose is racking up the frequent-flyer miles with all these trips back and forth between Florida and NYC.

After Reyes is seen by the Mets’ doctors, one has to wonder — is it time for a second opinion? Further, is it time to forget about this season, shut him down, and make sure he’ll be ready for 2010 and beyond? Surely, the similarly ill-advised returns of Carlos Delgado and Carlos Beltran will be enough to sell tickets in September — so let’s put the brakes on Reyes and make sure there will be reason to buy tickets next year.