An uninspiring loss on a gloomy day of sad memories through stormy weather.

Nelson Figueroa wasn’t pretty, but he did the job, holding the Phils to two runs in 5 1/3 innings while scattering 9 hits and 5 walks. He struggled every inning but somehow managed to keep too many runs from scoring. Unfortunately, the Mets offense was completely handcuffed by Cole Hamels, who allowed only one run through 6 2/3 innings.

Hamels earned his first win over the Mets since 2006, and his ninth victory of the season.

Hamels had an intriguing approach in this game, relying predominantly on his change-up and other soft stuff to set up his fastball, which he used sparingly. Generally you see more fastballs on a windy, rainy day, but the plan worked well for Hamels. The Mets waved weakly at the low-speed hurls and froze when the 90+ heaters entered the zone. In fact it looked as though the umpire was surprised at some of the fastballs, to the point where he might have missed a few calls that should’ve been strikes.

When Angel Pagan made a nice running catch to nab a Carlos Ruiz fly ball in the seventh, Keith Hernandez remarked, “That was ‘Carlos Beltran-esque’. Angel Pagan can go get ’em, he’s an excellent defensive outfielder”. He forgot to add, “when he’s not running into other outfielders, misjudging fly balls, taking bad routes to balls in the gap, and forgetting how many outs there are.” Otherwise, yeah, he’s “excellent” out there.

Jeremy Reed is quietly winning a job as a fourth or fifth outfielder next year — though it may not be for the Mets. He ripped his 15th pinch-hit of the season, which would’ve scored anyone in baseball from second other than Omir Santos or Ramon Castro (unfortunately, Santos was the runner). Having that kind of bat in the late innings is hard to find, and rarely found matched with a plus-plus glove and above-average speed. However, I doubt the Mets will pay the $1M+ he’ll command. Watch him get non-tendered and hook up with someone else next year.

Things are so bad that I caught myself rooting for Jimmy Rollins and Jayson Werth at certain points in the game. Sorry, but it’s hard for a former player not to appreciate the effort and execution of the Phillies. They’re tough, motivated, unflappable, confident, and polished.

The Mets have now lost four in a row, and are 19 games behind the league-leading Phillies. I’m not certain, but I think one more loss this weekend will mathematically eliminate the Mets from the NL East championship.

The Mets and Phillies do it again at 4:05 PM on Saturday afternoon. Eternal enigma Mike Pelfrey faces the ageless Jamie Moyer.

One Slugger Isn’t the Fix

Rob Neyer touched a nerve many Mets fans didn’t appreciate when he suggested that Dan Murphy wasn’t good enough to play first base. Remarkably, Neyer was much more direct, blunt, and critical than me. For instance, I still stand by my thought that Murphy can be a Don Money / Chone Figgins / Mark DeRosa type of “supersub” on a championship-caliber team — someone who plays nearly every day but at different positions. But if he’s the everyday first baseman, the Mets will need more than one slugger in left field to offset the expected lack of production. 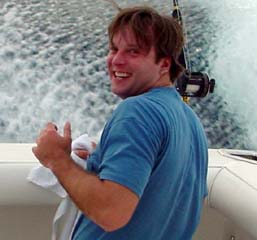 Loyal MetsToday reader gsparber has provided this gallery of photos from a 9/11 ceremony on Long Island. Thanks, Gary.

The sweepless series streak comes to an end — at the fins of the Fish, no less.

Bobby Parnell struggled from the get-go, yet hung around long enough to allow 6 runs (5 earned) on 7 hits and 5 walks in 5 innings. He did strike out 6, so there’s that. The bullpen did no better, giving up another 7 runs over the final four frames.

Major League pitchers — and by that I mean pitchers who belong in MLB, as opposed to those who are simply in MLB — will generally miss their target by a few inches, when they miss. Home plate, after all, is only 17 inches wide, and the strike zone is at most 24 inches tall. So if one misses by more than 4-5 inches, that’s significant. Bobby Parnell, however, was consistently missing his target by FEET. Low, high, outside, inside — he was all over the place, looking more like a high-A ball pitcher than a Major Leaguer. It’s always a bad sign when you are regularly seeing the number on the catcher’s back from the centerfield camera view. Omir Santos was constantly reaching, blocking, and jabbing at balls that were nowhere near the intended target.

And while it’s true Bobby Parnell needs to develop his “secondary stuff”, that wasn’t the issue on this particular evening. He was missing by feet with his fastball. At some points, it appeared as though he was trying to aim the ball, and others, he needed to groove the ball over the heart of the plate after falling behind. Bad night all around.

The first inning was a killer for Parnell, and he could’ve gotten out of it if Anderson Hernandez had not muffed a routine DP grounder. But, AHern was likely on his heels because of all the balls being thrown and walks being given prior to that play. In addition, though you could say Parnell was “unlucky” because of that error, you could also say he was incredibly lucky that Dan Uggla chose not to focus in his first-inning at-bat with the bases loaded. Uggla had a horrendous plate appearance, swinging wildly at the first pitch he saw, which was a foot above the top of the strike zone, and the last pitch he breezed at, which bounced a good two feet in front of the plate. This came immediately after a four-pitch walk. Bad baseball by Uggla, but a break for Parnell.

Despite this and other bad outings, I like Parnell’s tools. His sinking fastball has good downward run and is nicely complemented by the hard 96+ MPH heater up in the zone. But he’s really raw, and needs time to polish up his game. At 25 years old, you’d hope he’d be further along, and I wonder if the decision to make him a one-inning reliever has stunted his development.

Tobi Stoner made his big league debut, and spun a scoreless sixth. I’m not sure he has MLB stuff — he telegraphs that curve and doesn’t have much on the fastball — but how can you not root for a guy who found his way here from Germany and really has no business at this level? Typically you don’t see a guy with his mediocre arsenal getting to the bigs after only 500 minor league innings. But his ability to stay healthy, get the job done, and take advantage of an incredibly poor minor league system has been rewarded with a Major League paycheck. He’s a survivor, and I hope he can find a way to stick around.

Jeff Francoeur and Angel Pagan both went 3-for-4. That was the extent of the excitement on offense.

The Mets begin a three-game series on Friday against the first-place Phillies. Nelson Figueroa faces Cole Hamels in a matchup of aces that begins at 7:10 PM.