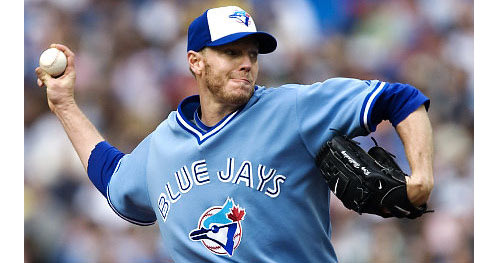 The New York Times is reporting that the Mets may go after Roy Halladay, if in fact the Toronto Blue Jays make him available this winter.

As MetsBlog notes, the fact the Mets have little in the way of near-ready prospects in their farm system may not matter, since few teams will be able to handle the financial commitment that is required to keep Halladay away from free agency. In other words, it could be another Johan Santana situation — whereby the Mets acquired the star lefthander more because the deep-pocketed Yankees and Red Sox walked away from the table rather than because the Mets had the best package of players.

If indeed the Mets make a pitch for Halladay, and pull of a Santana-like trade-and-sign deal that totals over a hundred million dollars, it will be another case of the Mets using their same old shortsighted, knee-jerk strategy of “building a winner”.

Getting Halladay would be great, no question (as Jerry Manuel likes to say). But it’s just another band-aid that will send the Mets backward over the long term.

The Mets had the opportunity to obtain one of the top three pitchers in MLB last winter — and would not have had to give up a single player. We discussed right here on MetsToday last November that the Mets should go after C.C. Sabathia. Sabathia wound up signing a 7-year, $161M contract — about the same deal that Halladay is likely to get. The big difference, however, is that Sabathia was only 27 when he began that contract, and Halladay will be 33.

Maybe they would have not have been able to top the Yankees (even though Sabathia preferred the NL), but that’s not the point — the point is that the Mets never even sniffed Sabathia’s way. They were completely satisfied to bring back another young lefthander at a much cheaper cost, and to rest on the laurels of the “big splash” they made in the bullpen (signing K-Rod, trading for Putz).

Last winter the general consensus was that the Mets needed to fix the bullpen. The PR message built was, “address the bullpen problem, and the Mets will go to the World Series”. So once they signed Frankie Fantastik and obtained J.J. Putz, there was every reason to buy season tickets.

In the end, they overspent on K-Rod, overspent on Oliver Perez, and both overspent and over-traded for J.J. Putz — a total expenditure of $96M and 7 players for band-aids to stop the bleeding. By spending all that dough and emptying their farm system, you couldn’t say they weren’t trying — and it’s now easy for them to look back and say “hey, we did what we had to do, we fixed the bullpen”.

Fast-forward one year and the Mets have new wounds opening … with more band-aids on the way. 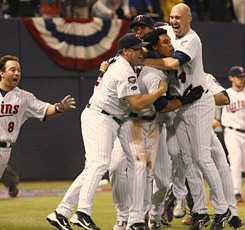 For the first time since I can remember, I enjoyed watching a baseball game on TV that included color commentary by Ron Darling.

Congrats to the Twins for winning the AL Central, and thanks to both the Twins and the Tigers for treating America to an event that defined the beauty of baseball.

Mets fans may note that Carlos Gomez scored the winning run — you can see him in the picture to the left, being congratulated by the winning pitcher Bobby Keppel.

How ironic (fitting?) that both players began their careers in the New York Mets organization!

Much has been said about the lack of Mets history at Citi Field — not only from here, but throughout the Mets blogosphere. Many fans have felt that the park is an homage to Fred Wilpon’s beloved Brooklyn Dodgers — underscored by the Jackie Robinson Rotunda.

Some may have missed this following tidbit from Mike Francesa’s recent interview with Jeff Wilpon.

“Did feel that any of the criticism you received … from me or anybody else … do you think there was anything — criticism — that was unfair this year or your team?”

“Not the team but maybe about the ballpark, because I don’t think we did anything to slap anybody in the face. It wasn’t something where we said ‘gee, we’re going to honor the Brooklyn Dodgers but we’re not gonna honor the Mets or the Mets history’. So I think that is the only thing that was said that was unfair. We’re going to make the changes now to correct it, because it is a proper criticism.”

Help me out, folks. Is it possible for UNfair criticism to also be classified as “proper criticism” — in the same sentence?

I suppose it’s good that the issue is being “corrected” — even if it was unfair, or proper, or both(?)

Since this is the way the leader of the franchise addresses and explains issues, it’s now clear why we get similarly confusing doubletalk from the underlings, such as Omar Minaya and Jerry Manuel — perhaps everyone in the organization is expected to practice the art of “Wilponspeak”.