After the Mets won in a laugher on Friday night, the Phillies returned the favor, pounding out 10 runs on 13 hits as Roy “Doc” Halladay surgically removed the New York offense.

Roy Halladay pitched a complete-game, 3-hit shutout, expending 118 pitches — including 88 strikes. That type of pitch count would get John Maine through 5 1/3 innings, I reckon.

Mike Pelfrey, on the other hand, was less than stellar, allowing 8 hits, a walk, and 6 runs in 4 innings, throwing 82 pitches. His ERA more than tripled in the process. Big Pelf had a hard time hitting spots, and when he had to give in, his fastball was a little too high and got too much of the plate. Home plate umpire Ron Kulpa was calling a very low strike zone, but Pelfrey couldn’t take advantage the way Halladay did.

That low zone irked several of the Mets hitters, and David Wright nearly got tossed for arguing with Kulpa in the top of the sixth. From the angle provided by the centerfield camera, several pitches did seem below the knees, but Halladay’s sinker was running down hard so it’s difficult to say whether they were balls as they passed the plate, or merely looked like balls by the time the catcher caught them.

Ike Davis drew the lone walk that Halladay allowed, and the three hits were struck by Wright, Jason Bay, and Henry Blanco. Blanco and Wright hit doubles, while Bay hit a single. Jose Reyes saw more pitches than any other Met with 24.

Although Blanco hit a double, seeing both he and Alex Cora in the lineup against the best pitcher in baseball didn’t exactly boost my hopes when the game began.

Blanco, by the way, is 5-for-11 lifetime against Sunday night starter Jamie Moyer.

The rubber match takes place on Sunday night at 8 PM and will be broadcast by ESPN. Johan Santana faces Jamie Moyer. Be sure to visit the ESPN Baseball Tonight Live Chat so you can read my witty comments during the game.

Sean Green and Other Injury Updates 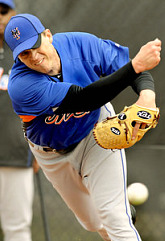 According to Mets.com, Sean Green’s “strained intercostal muscle” is actually a stress fracture of his rib. Like most Mets fans, I’m in no rush to see Green back on the 25-man roster. But why would it take an entire month before someone ordered an X-ray? Things that make you go hmmmm.

Speaking of that routine test procedure, X-rays on Jeff Francoeur’s elbow were negative. Francoeur was hit in the forearm by a 95-MPH fastball during last night’s game. The injury is labeled as a contusion. Jerry Manuel suggested that he would give Francoeur the day off today.

There is no update on Carlos Beltran. However, there was a report that he was fitted with a knee brace “in the hopes of accelerating his rehabilitation, a team official confirmed…”

That sounds sketchy to me, but we’ll get more into that in a future post.

Similarly, there is no word on Kelvim Escobar. Did you expect any?

Speaking of no word, the Mets are mum on Ryota Igarashi at the moment.

Daniel Murphy, on the other hand, is back on the field, playing in “extended spring training” games. I get the feeling, though, that most Mets fans — and Frank Catalanotto — would prefer he take his time getting back.

Finally, no progress has been made on Oliver Perez’s brain, and MLB refuses to allow the Mets to place him on the DL for “detachment and disconnection between mind and body”. Apparently if an injury doesn’t come up on an X-ray, MRI, or psychiatrist’s report, it doesn’t apply. Oh well.