For the fifth time in as many tries, the Mets lost the “rubber match” of a three-game series.

And for the third time in as many games, it was a solo homer in the final inning that was the difference in the game.

Several opportunities to break the game open presented themselves, but the Mets were unable to take advantage. It was as if they were waiting for the Reds to win the game.

Jon Niese was OK — not great, not awful, about what you expect from a #5 starter. He allowed an eye-popping 12 hits in 6 innings but no walks and 4 runs. I think that is termed a “quality start”. Looking away from the numbers and at him as a human, Niese seemed to do a good job of getting on top of the ball and finishing his pitches early in the game, but gradually dropped his arm angle a bit — causing his fastball to flatten and his curveball to be tipped off. He threw the curve only sparingly the first two times through the lineup, then started to use it more the third time through, but it hung often and he gave it away by coming more over the top. He did throw maybe two or three sharp curves, but the rest hung high or never bit enough to make it into the strike zone — he was cutting off the follow through on it. It seemed that the Reds batters realized they could sit on the fastball and slider, which both were flat and moved mostly horizontally; without vertical drop, a slider (or cutter, whatever he wants to call it) is generally ineffective.

As mentioned by Gary S. in the comments below, Hisanori Takahashi was splendid in his three innings of relief, striking out 4 and allowing no baserunners. At some point, Jerry Manuel is going to have to hand him a spot in the rotation — either Oliver Perez’s or John Maine’s.

I suppose the fact that the Mets caused closer Francisco Cordero to blow two games in the series could be construed as “fight” or “grit” or whatever you want to call it, but they still lost two out of three. So, what does it mean?

Speaking of, Frank Catalanotto got the big hit to lead off the ninth against Cordero and eventually scored. I know a lot of people are unhappy with Smithtown’s Favorite Son on the roster instead of Chris Carter — and I want to see The Animal with the big club — but regardless of his slow start, Catalanotto has been and remains a pure hitter and one of the best pinch-hitters in MLB. The issue is whether the Mets can afford to carry someone who is more or less a pinch-hitter and nothing more. It might be nice to see Catalanotto spend some time at second base and/or the outfield. There’s no way he can field as well as Alex Cora at the keystone but he’ll be adequate and might hit enough to make up for his defensive deficiency in that one start per week. Not that it matters … Cora is in place for the duration.

Jason Bay left 6 runners on base and went 0-for-4 before being removed from the game in the seventh. He epitomized the story of the game for the Mets: plenty of opportunities, but no one stepping up and getting the big hit. I’m not terribly concerned about Bay — I believe that he will eventually get hot and carry this team at some point — but the problem is that no one else is picking up the slack.

Toward the same point, the Jose Reyes Batting Third Experiment is quickly getting tired — even if Reyes drove in a run with an infield hit. Suddenly I’m starting to wonder if the RBI is a more relevant stat than the Beaneheads give it credit for — maybe, just maybe, driving in a run has something more to do with having many opportunities to do so.

And along the same lines … there were 11 homers hit by the two teams combined in this series — all were solo shots.

Under the heading of irrelevant but curiously embarrasing: during the top of the 8th, Gary Cohen and Ron Darling chatted about Miguel Cabrera, while the SNY cameras focused on shortstop Orlando Cabrera (no relation).

The Mets take an off day on Thursday while fleeing Cincinnati and traveling home to face the Giants in Flushing. Game one occurs on Friday night at 7:10 PM, with Mike Pelfrey facing Jonathan Sanchez. 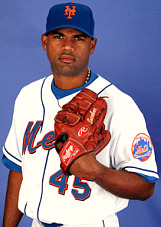