Burning rubber is not something the Mets do well.

For the sixth time in as many chances, the Mets failed to take the “rubber match” of a three-game series. As a result, the Nationals enter Thursday as the only second-place team in the NL East.

Roger Bernadina was the star of the game, making a Ron Swoboda-like catch in the fifth on a Jeff Francoeur liner to save three runs and hitting two huge homeruns — including one off Francisco Rodriguez in the top of the ninth that gave the Nats the victory. Did I mention those two taters were the first homers of his big league career? For the uninitiated, Bernadina is known as a singles hitter who is in MLB because of his speed and his glove. Comps: Willy Taveras, Roger Cedeno, Omar Moreno. He was hitting .212 coming into the game.

Mike Pelfrey dribbled an RBI single through the left side to tie the game 2-2 after Rod Barajas was walked intentionally to load the bases in the third. The more I watch Jim Riggleman “manage”, the more I wonder how in the world the Nats are in second place — it’s like they win in spite of his incompetence.

On the mound, Pelfrey was so-so, not great, as many of the balls hit off him found holes. For all that contact, it is somewhat ironic that the first 5 outs of the game made by Washington came via the strikeout. He allowed 4 runs on 7 hits and 3 walks in 5 2/3 innings — expending a career-high 119 pitches. Too many pitches, too many baserunners. Has he fallen the Earth?

Nats starting pitcher Craig Stammen was slightly more inefficient on the mound, giving up 4 runs on 6 hits and 4 walks in only 5 innings. However, Stammen was better than Pelf at the plate, as he went 2-for-2 and drove in 3 of Washington’s first 4 runs.

Jason Bay has a six-game hitting streak, and has a hit in each of his last 12 games at Citi Field.

Gary Matthews Jr. struck out again in a pinch-hitting appearance. He’s now struck out 19 times in 46 ABs. But Frank Catalanotto was let go because GMJ can play CF. OK. Whatever.

Matt Capps earned his league-leading 14th save. Glad he’s on my fantasy team, but wish he’d get these saves against the Phillies, Braves, and Marlins.

Fernando Nieve threw 21 pitches in the 8th, which was also his 21st appearance of the year. He’s on pace to appear in only 100 games this year — which is still in the neighborhood of Mike Marshall’s all-time record.

Francisco Rodriguez has been startlingly ineffective this year — not dissimilar to what we saw from him last year. His loss in velocity has made him more hittable than ever before. It feels like he has more than 1 loss and 2 blown saves — or is it me? I’m too tired to check the stats and figure out why that is.

The Mets have made more pitching changes than any other team in the NL. That’s what happens when your manager is managing for his job.

The Mets fly to Miami to face the Marlins in a three-game set. Game one begins at 7:10 PM. Johan Santana faces Josh Johnson. 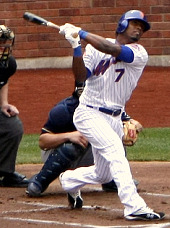 If it were still April, the “shaking off the rust” excuse would still apply to Jose Reyes. However, we’re now getting into mid-May, and Reyes is floundering with a .229 batting average and a .281 OBP. Those certainly are not the numbers you’d expect from the best offensive player on your team — a.k.a. the number-three hitter.

Could this batting third thing be getting into his head?

It seems to me that his plate discipline has gone out the window since moving to the #3 spot — but that’s just my old eyes and my unreliable memory talking. So, as much as I tend to eschew “the new math” of baseball, I took a suggestion (via Twitter) from Craig Glaser of Sabometrics and took a look at “swing rates” on Fangraphs.

Accordng to the numbers, Reyes’ “outside swing percentage” (or “O-swing%”) — the percentage of balls outside the strike zone that he’s swung at — is