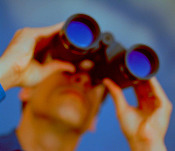 Remember when we suffered through Johan Santana’s awful start in Philadelphia? Some suggested that he was “tipping pitches”, and therefore letting the Phillies hitters know exactly what was coming?

Well, maybe the Phillies DID know what pitch was coming, but not because Johan was tipping it — rather, because the Phils’ bullpen coach was stealing signs from the catcher and relaying them to his hitters.

This outlandish claim does not come from my imagination, but rather from a recent incident in which Phillies coach Mick Billmeyer was caught redhanded — with binoculars! — during a game against the Rockies. If you read that article, you’ll learn that the Rockies were the SECOND team to complain to MLB about the Phillies stealing signs. The first team to file a complaint was — you guessed it — the New York Mets, who thought something was fishy about Santana’s May 2 start.

Thus far, MLB has done little to reprimand the Phillies, other than a mere slap on the wrist.

If the Phillies hitters know what’s coming, it certainly can make their job a little easier — particularly against a pitcher who has good command and is hitting the spots that are called. Using binoculars to steal signs has gone back for decades, with the most famous (infamous?) example being the alleged sign-stealing of the 1951 Giants against the Dodgers — when Bobby Thomson allegedly knew what pitch Ralph Branca was throwing when he hit the “shot heard ’round the world”.

Maybe the sign-stealing has done little to help the Phillies hitters. But it sure would help explain the worst outing of Johan Santana’s career.

Hat tip to alert MetsToday reader “Darin”, who emailed to me the link to MLB Fanhouse. Thanks Darin!