Jerry Manuel keeps his job for at least another week, maybe two.

Jason Bay continued his red-hot hitting — he is about as locked in as a batter can be right now — and Johan Santana put forth perhaps his best, most clutch outing of the year as the Mets beat the Yankees and won their first “rubber match” of 2010.

Johan Santana was spectacular through 7 2/3, allowing only 1 earned run on 6 hits and 3 walks, striking out three, relying predominantly on fastballs up and well-placed changeups down. He cruised from his first pitch through his 86th, but quickly lost his command in the eighth as the Yankees loaded the bases on two walks and a single. However, Pedro Feliciano came in and struck out Robinson Cano on three straight sliders — perhaps the sharpest he’s thrown all season.

Meanwhile, Jason Bay continued to carry the Mets on his back, hitting 2 homeruns in as many at-bats, walking once, and getting plunked (unintentionally). He scored two and drove in three. For those who were up in arms about Bay for the first month and a half of the season, you were told he was “streaky”.

Jose Reyes had another two hits and is starting to look a little better at the plate. Remember he sat on a couch for over a month.

Luis Castillo was a late scratch from the lineup and Alex Cora took over the #2 hole. He made all of us eat crow with another clutch 2-out, 2-RBI single, followed by a stolen base. Championship ballplayer, or performing well enough in spots to create that illusion? You decide.

There are rumblings that Castillo will need to go on the DL shortly. If so there’s an outside chance that Cora’s vesting option for 2011 automatically kicks in based on games started (he needs to start 80, he’s started in 17 thus far).

Ryota Igarashi, who was activated from the DL a few hours before game time, came on in the ninth to protect a 6-1 lead. He proceeded to throw the ball all over the place and allow the Yankees to rally, forcing Jerry Manuel to bring in K-Rod. Iggy’s final line was 1/3 inning, 3 runs, 2 hits, 1 walk, 18 pitches.

Francisco Rodriguez caused everyone a minor heart attack en route to his 8th save. He threw 21 pitches in the process, following up his 5-out, 28-pitch performance on Saturday night. That’s 49 pitches in two days and 63 pitches over the last four. The Mets have an off day on Monday but will that be enough rest before they face the Phillies on Tuesday?

As just mentioned, Mets have off on Monday then start a three-game set vs. the first-place Phillies in Flushing on Tuesday at 7:10 PM. R.A. Dickey takes the mound against Jamie Moyer in what promises to be the MLB game with the lowest average MPH per pitch.

Post your comments and converse with other MT visitors during the game below. You can also engage me on ESPN’s Baseball Tonight Live.

Lima Time is Up 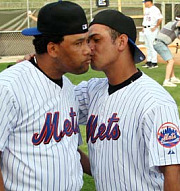 If you haven’t heard already, former Mets pitcher Jose Lima passed away this morning at the age of 37. According to his wife, “Lima Time” died of a sudden heart attack at his home in Los Angeles. He is survived by his wife and five children.

Kind of weird and creepy that two days from now will be the second anniversary of the death of Geremi Gonzalez — who made 3 similarly horrendous spot starts for the Mets that same season. Gonzalez died after being struck by lightning in Venezuela on May 25th, 2008.

Just to creep you out a bit more, the picture to the left is of Gonzalez greeting Lima during spring training in Port St. Lucie in February 2006 (FYI I found the photo on the Mets blog “Can’t Stop the Bleeding“).

One of the benefits of being affiliated with ESPN is that the New York Mets sort of see this blog as a member of the media. As such, the Mets PR department now sends to me the official lineup for each game. Here is tonight’s:

Have to admit I’m a little surprised to have received this at 3:40 PM — well before batting practice. I thought Jerry Manuel makes out the lineup card based on what he sees from BP. Maybe that’s no longer the case.

Speaking of ESPN, you can see me — and engage in the conversation — on the Baseball Tonight Live chat on ESPN.com, beginning at 7 PM.

Just got word from Mets PR that Castillo has been scratched for Alex Cora. I’m guessing that Castillo’s foot is acting up again.