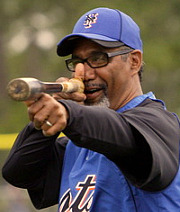 Over the past week or so we’ve been experimenting with some things here at MetsToday and I’d appreciate your feedback.

2. Did you appreciate the inclusion of videos in the posts last week? Would you like to see more videos included now and then (or on a daily basis), in the future?

3. There have been “game day open threads” posted for the past several days — an opportunity to converse with MetsToday readers during the game. Is this something that should be continued, and if so will you participate on occasion?

4. Do you find value in the “link dumps”? Would you like to see them on a regular basis?

5. Do you have any other requests or ideas on how I can improve your MetsToday experience?

Please post answers to any/all of the above in the comments section. I could’ve used an external survey site but that seemed too formal and complicated. Many thanks!

The Mets have won 3 of their last 4, which could be termed a “roll”. With the day off today let’s focus on the positive and savor the moment.

Jason Bay is literally carrying the Mets on his back — he’s 10 for his last 15 in these past four games, scoring 8 runs and driving 4 extra-base hits, including his first two homers after a 92-at-bat drought. He had multiple-hit games in all of the wins, and only one hit in the loss (to the Yankees on Friday).

Bay also has a hit in each of his last 7 at-bats and has reached base in 9 consecutive plate appearances, going back to Friday night.

One more Bay fact: he has a hit in 15 consecutive games at home — tied for the longest at-home streak (with Cody Ross).

Last night’s win marked two milestones: the Mets’ first “rubber game” win of 2010 and their first “Subway Series” win over the Yankees since 2008, when they swept the Bombers in the Bronx.

Johan Santana’s win last night was the first by a Mets starter not named Mike Pelfrey since April 30th. Santana has a 1.35 ERA over his last 3 starts.

Wins by Santana and Pelfrey over the weekend marked the first time Mets starters had back-to-back wins since April 28-30, when John Maine beat the Dodgers and Jon Niese beat the Phillies.

The Mets are 18-7 this year when they score first.

Francisco Rodriguez has caused 76 heart attacks in his last three appearances, tying a mark set by Jesse Orosco in 1986.