Wall Street Journal – Tim Marchman announces the inductees to the Mets Hall of Fame of Bad Pitching Contracts.  With the exception of Pete Harnisch, they were all signed after 2002.

Amazin’ Avenue – Alex Nelson thinks the aforementioned Chris Sale is an interesting option, but mechanical issues could result in shoulder problems down the road. Nelson thinks Sale could wind up as a reliever.

Bleacher Report – Are the Phillies finished? Not so fast, says Jamie Ambler.

Baltimore Sun – The Orioles fired manager Dave Trembley yesterday. Former Mets disaster Juan Samuel will take over in the interim. I had forgotten that Samuel managed the AA Binghampton Mets in 2006. Good luck, Juan! We’re proud of you!

And here’s some video of Chris Sale, via Baseball America and Amazin’ Avenue:

Not a good week for would-be Mets second basemen. SNY’s Brad Como is reporting that Luis Castillo is headed to the DL.

I guess that clears roster room for Jon Niese? I find that hard to believe – the team will probably be calling up a middle infielder… but if Ollie Perez continues to refuse a demotion, anything is possible.

UPDATE: Had I read the ENTIRE Tweet, I would know that the Mets are recalling Ruben Tejada to replace Castillo.

Oh well. I guess Twitter is too long for my attention span. Pretty sad, when you think about it. 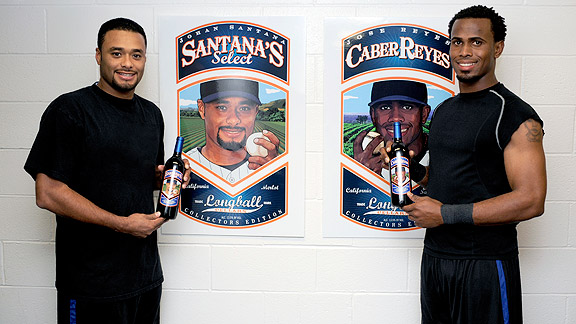 ESPN reports that Jose Reyes is joining Johan Santana and 23 other players who have lent their name and likeness to a series of wines that are being sold for charity:

So far, players have included Jorge Posada (Jorge Cabernet), Kevin Youkilis (SauvignonYoouuk Blanc), Derrek Lee (CaberLee), Johan Santana (Santana’s Select) and Tom Glavine (Cabernet Glavingnon) to name a few. For 2010, it is Josh Beckett (Chardon-K) and Jacoby Ellsbury (ZinfandEllsbury). The strategy has been to go after the big names in each market, and almost no one has said no. [ESPN]

Reyes’ wine – CaberReyes – will be part of the ¡Viva Baseball! exhibit at the Baseball Hall of Fame in Cooperstown, NY.

The wines are produced by Massachusetts-based Vinlozano Imports, as part of the Longball Cellars Collection.

With their Massachusetts location and several Red Sox players already featured, I’m surprised there is no Lou Merlot-ni or Bernie Carbo-net Sauvignon.

The Daily News is reporting that the Mets will be honoring Susan Rich during tomorrow’s game at Citi Field. Susan was the first female vendor at Shea Stadium, working from 1974-1982:

The Amazin’s are spoiling Susan Rich, 50, with on-field access during batting practice, a scoreboard salute and prime seats behind home plate for the 4:10p.m. game versus the Florida Marlins.

“I’ve never been on the field at Citi Field,” gushed Rich, a Mets die-hard and mother of two who will be attending with her family. [NY Daily News]

Good for her. And kudos to Fred Wilpon for setting this up – the whole thing apparently stemmed from a letter sent by Susan’s husband to the Mets’ owner.

Friday Morning Links (Dan Murphy Out For the Season Edition) MetsToday – Joe Janish (that’s not me!) shares his thoughts on the Mets’ mishandling of the Dan Murphy situation.

ESPN New York – The aforementioned Feliciano had two hits in a 7-1 loss to Syracuse. He leads the league with a .388 average.

213 Miles From Shea – Elliot Teichman points out that Aaron Heilman is the best thing going in the Arizona Diamondbacks’ bullpen. Yeah, seriously. The things you learn from watching the MLB Extra Innings package…

The Daily Stache – Frank Gray has a list of five things the Mets must do to contend this summer. Although, it looks like the Mets will contend no matter what they do (or don’t do).

TheRoPolitans – Andrew Vazzano to the rescue with one of Jerry Manuel’s all-time greatest quotes.

And here’s a video of Dan Murphy giving a hitting lesson to SNY’s Kevin Burkhardt:

Last year on this blog, I wrote about the Dan Murphy Myth. As a result of my “negativity” (I called it “realism”), many people thought I “didn’t like” Dan Murphy. Nothing could be further from the truth. I was merely being realistic about the kid’s skillset. To me, he was a so-so MLB hitter with no speed, below-average instincts, suspect strike zone judgment, slow feet in the field, and hard hands. I always felt his absolute ceiling was comparable to Mike Hargrove or Mark Grace, but more likely Matt Franco.

We may never know for sure whether Murphy had a chance to be Mark Grace, because his latest knee injury will have him out for the year — and potentially end his MLB career. The real shame, though, is that it didn’t have to happen this way.