Those who had the patience to sit through a rain delay and almost ten innings of scoreless, scintillating baseball were rewarded with a win by the home team.

Ruben Tejada ripped a one-out double off reliever Chan Ho Park and pinch-hitter Nick Evans followed by stroking the Mets’ seventh hit of the damp night to drive home Tejada with the winning run, giving the team their 71st victory and Hisanori Takahashi his ninth win of the year.

In his second MLB start, Dillon Gee once again impressed, shutting out the Bucs through 6 innings on 5 hits and 4 walks, striking out 3 and expending 106 pitches.

Elmer Dessens and Pedro Feliciano each tossed a scoreless frame apiece, and Takahashi held off the Pirates for two more.

In a postgame interview,Nick Evans repeatedly referred to himself as a “bench player”. I know that he IS a bench player, but it’s uncomfortable listening to him talk about himself in such a way. I mean, the kid is only 24, and it sounds like he’s resigned himself to being a part-time player. It’s kind of sad.

As a team, the Mets had only 34 plate appearances in the 10 innings and saw only 122 pitches. The pitch count wouldn’t have been that high had it not been for the patience of Ike Davis, who led the team by seeing 24 pitches yet didn’t draw a walk. Josh Thole saw 17 pitches and no other Mets saw more than 13. Note: James McDonald is NOT Roy Halladay.

Inexplicably, Jerry Manuel instructed Jose Reyes to sacrifice bunt with no outs and Dillon Gee on second base in the third inning. Even my wife wondered what the hell that was all about, and she’s usually quite . If that wasn’t prime evidence that someone else could have done a better job managing the Mets during the past 2 1/2 years, I don’t know what is.

With this win, the Mets improve their record at the Field at Shea Bridge to 41-27; the Pirates drop their road recrod to a dismal 15-56. Can you imagine? Winning only FIFTEEN games on the road through 71 games? Yikes!

The Mets and Pirates do it again at 7:10 PM on Tuesday night. R.A. Dickey faces Zach Duke. 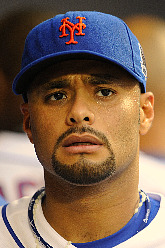 We have heard the news that Johan Santana will not pitch again in 2010, due to a shoulder injury. Despite the fact that Santana has yet to see Dr. James Andrews for a second opinion, and has yet to even schedule a surgery date — much less undergo the surgery, which will reveal the true extent of the injury — we have also been told that Johan “will begin playing catch in January” and is expected to be OK next season.

Why am I having a feeling of deja vu?

So pardon me if I’m a bit cynical regarding Santana’s recovery.

This is a team that counted on Carlos Beltran to return to perfect health by Opening Day after what might’ve been microfracture surgery; believed Kelvim Escobar could be the setup man even if he couldn’t grip a baseball; planned on a starting rotation that had four pitchers returning from surgery and a fifth who was the backup plan. And this “hope for the best” wasn’t new — the Mets similarly crossed their fingers that high-impact players would return from injuries in previous seasons. Putz, Moises Alou, Orlando Hernandez, Pedro Martinez, and Carlos Delgado are a few that immediately come to mind.

You would think that management would

Is Jenrry Mejia a Good or Bad Example of Mets Minor League System? 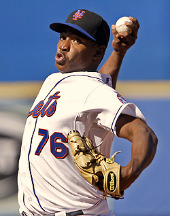 Hard-throwing Jenrry Mejia symbolizes what is possible from the minor league system organized, maintained, and overseen by Omar Minaya. But is that a good thing or a bad thing?

Mejia was signed by the Mets out of the Dominican Republic at the tender age of 17 — an age when most youngsters in the USA are high school juniors or just beginning their senior year. I think it’s far to say that a 17-year-old can be taught many things about the game of baseball, and that a young man of that age is perfectly capable of changing his habits, approach, and mechanics. I make this statement not by guesswork but from experience — both by adjusting my own as well as by helping others change their own. In fact, from my first-hand experience, it is possible to completely overhaul an athlete’s style, mechanics, and thought process as late as age 21; it’s not easy, but it’s possible. The older an athlete gets, the more ingrained certain habits become, and thus the more difficult it is to “break” those habits and re-learn correct ones. That’s why, generally speaking, you want to begin teaching an athlete at a young age — the younger, the better.

In the case of 17-year-old Jenrry Mejia, the Mets had a golden opportunity to develop a raw, exciting talent — to mold him as they see fit, into what they believe is the ideal pitcher.