So much for playing the role of spoiler.

Well, now that I think about it … they are acting as spoilers for the Phillies, in that they are giving the Braves a chance to gain ground on the NL East leaders.

The Mets wasted another strong effort by rookie Dillon Gee, who went 7 strong innings, allowing 3 runs on 6 hits and 3 walks, striking out 3 and expending 95 pitches (60 for strikes). He has been impressive in all three of his big league starts, but before we get too excited and pencil him into the 2011 rotation, remember that both Pat Misch and Nelson Figueroa were similarly effective last September, and neither were on the Opening Day roster. Though, next year Gee won’t have to compete with immortal figures such as Oliver Perez and John Maine, so he may have a fair shot.

Strange fact: Gee has allowed only 13 hits in his 3 MLB starts, but 6 were for extra bases (one homerun and five doubles).

In one-third of an inning of relief to start the ninth inning, Bobby Parnell was awful, allowing 2 hits, including a solo homer by the reincarnation of Nate McLouth. I’m guessing this was some kind of a test, to see how he would handle a high-leverage, late-inning situation, since the Mets were only down by one; many managers would use their closer in such a spot. If it was a test, he failed — miserably. On the bright side, there are 13 more opportunities for another quiz.

On offense, Angel Pagan and Jose Reyes both went 2-for-4 from the top of the lineup, with Reyes hitting his 11th homer of the year and Pagan stealing his 35th base. However, the rest of the order managed only 3 hits against Tim Hudson and the Braves bullpen — one of which was a solo homer by Luis Hernandez, who did so on a broken foot. Hernandez fouled a pitch off his foot prior to sending a shot over the wall, and limped around the bases in excruciating pain.

David Wright stole his 19th base but went 0-for-3. He’s hitting .283 at the moment and his OBP has dropped to a startlingly low (for him) .358 — he should be at .390+. I’m faulting his big-swing approach, which has also resulted in an unimpressive 23 homers through exactly 600 plate appearances. At age 27, he should be entering his prime years, not trending downward. But we can’t put any blame on his mentor Howard Johnson (even if we gave HoJo credit for D-Wright’s good years). It’s not HoJo’s fault that Wright hasn’t had consistent protection hitting behind him this year. Hmm … is that really a plausible explanation?

With this loss, the Mets guaranteed that the Braves would have winning record vs. the Mets for the 2010 season. This has been the case every year since 1998, except for 2006.

Off Topic: Congrats to Don Mattingly 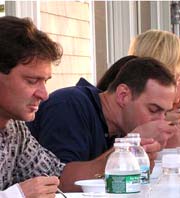 Since the Mets are barely interesting, and will continue to be until at least early November — when the World Series is over and MLB teams are allowed to make announcements again — we will mix in “Off Topic” posts here to provide more engaging content than what we’re getting from the Flushing Futiles.

That said, I want to publicly congratulate a man I worked for a few years ago: Don Mattingly. The Dodgers have announced that “Donnie Baseball” will be their manager after Joe Torre steps down at the end of this season.

From my experience working with him and his company Mattingly Hitting Products, I can tell you firsthand he is in real life the same person he appears to be publicly — a hard working, down to earth, intelligent, open-minded, all-around great guy with a positive, winning attitude and personality that make people want to follow him. At the same time he is completely comfortable in his own skin, and makes you feel comfortable in his presence — i.e., a guy with whom you can sit down and talk baseball for hours on end and forget that you are chatting with an icon whose plaque is in Yankee Stadium’s Memorial Park.

Will Mattingly be a great manager? We may have an idea around this time next year. Already there are people concerned with his lack of managerial experience, but the man he’s replacing — Joe Torre — had neither managing nor coaching exprience when he began his career in the dugout with the Mets, so who’s to say if it matters?

Whatever happens, I wish him the best of luck, and will quietly root for him — except when the Dodgers play the Mets.

After playing 4 games in Class C against Pittsburgh, the Mets were quickly reminded that Major League teams make few mistakes and usually have to be beaten; the better ones don’t beat themselves senselessly at every opportunity.

Ironically, it was a 21-year-old kid (Jason Heyward) who delivered the fatal blow — when usually you see kids that age down in the C level, not in the bigs. The times they are a’changin.

Heck, if it weren’t for seeing the Pirates play with my own eyes, I might believe the rumors that Class C no longer exists.

The Mets lost to the Braves. It was not a surprise.

Jonathon Niese was given a 3-zip lead early, but gave it up thanks to a 6-run fourth by the Bravos. Thanks to a David Wright error, all six runs were unearned, but that does not excuse Niese’s poor pitching.

Yes, Wright made an error (though, Ruben Tejada didn’t help David’s poor throw). But Niese followed that with several “errors” of his own — most notably, a two-out walk to opposing pitcher Tommy Hanson. Niese struggled with his command throughout his 91-pitch, 4-inning outing. As we’ve noted many times before, Niese — like many pitchers — over-rotates during the leg lift, which results in opening up the front side too early. A pitcher can get away with that if his throwing arm speed is quick enough to get to a good release point before the opposite arm pulls the body too far away from that point. It’s not safe for the throwing shoulder, but it’s possible to throw strikes. However, the timing has to be perfect; if some body part is off by a tenth of a second, the release point will change. With Niese, it appears that his arm speed was too slow — maybe the result of an unprecedented workload this year. It was just slow enough to keep it lagging behind as that front side opened prematurely, and as a result many of his pitches were up and away to the righthanded batters. In an effort to over-compensate for that issue, he was holding on to the ball too long when throwing inside to RHs, resulting in balls too far inside and off the plate. Two things exacerbated this issue: his side-to-side momentum (from first base to third base) and overuse of the slider / cutter. His slider / cutter was flat, with mostly sideways movement and no downward bite.

These issues are very common with all pitchers at all levels, including MLB. Bad mechanics are the rule, rather than the exception, mainly because pro coaches have not been exposed to the silly thoughts expressed by that British guy Newton back in the 17th century. What the heck would that guy know about baseball anyway? Nelson Doubleday wasn’t even born until over 100 years later!

Speaking of bad mechanics, my arm hurts just watching Tommy Hanson. I keep waiting for his arm to follow the baseball to the catcher’s glove on every pitch. He stands completely upright and thus puts all of the pressure of deceleration on his shoulder. Unless he is a freak of nature, that shoulder will give out within the next few years. The sad thing is that he’s using very little of the advantage his 6’6″ height affords him; he could be getting the same or better velocity and less strain on the arm if he’d been taught to fall forward or “drop and drive”. But, you never know; Don Drysdale’s mechanics were scary in a different way, and he threw 250-320 innings a year for ten years before his arm gave out.

Lucas Duda appears to be the woken giant. He went 2-for-3 with 2 runs scored and 2 RBI — including his first MLB homer.

The Mets as a team collected 6 hits, and only one after the fourth inning. That one hit was a pinch-hit double by Nick Evans in the 7th. Keep on, keeping on, Nick.

Josh Thole struggled a bit catching the baseball in this game, for whatever reason — maybe because Niese’s command was off. He was boxing the ball frequently, moving around more than I’d like to see, and should’ve been charged with a passed ball that the official scorer ruled a wild pitch. He’s much improved over last year but he’s still too herky-jerky behind the plate; generally a catcher should be more “quiet” back there. It doesn’t help his cause nor development that just about all Mets pitchers have struggled with command this year (not unlike last year, and the year before).

Bobby Cox was thrown out of the game in the second inning for arguing balls and strikes. Again, not a surprise.

Brian McCann showed up to the game with a few shiners and scratches around his right eye. He claims it was the result of falling in his pool. Yeah right. In my day we called it “slipping in the shower”. Whatever one wants to term it, it likely has little or nothing to do with water.

The Mets and Braves meet again on Saturday afternoon at 4:10 PM, which means we have the pleasure of watching this one on FOX (unless you are one of the few thousand heading out to the Field at Shea Bridge). Dillon Gee faces Tim Hudson.