F-Mart Injured After One Game

According to ESPN-NY, Fernando Martinez experienced knee discomfort in his first game with Escogido of the Dominican League and could possibly be shut down for the remainder of the winter.

Martinez had gone 1-for-3 with 2 RBI, but reportedly had issues with the same knee that ended his 2010 season after 71 games. It is assumed that the Mets will make the decision as to whether he will continue playing or rest until the spring.

However, there is good news coming out of Escogido. Second baseman Justin Turner also made his winter league debut and came out of it healthy. He had one hit in four at-bats.

Speaking of second base and the winter leagues, Daniel Murphy has been “very serviceable” at the position, according to a scout quoted by Adam Rubin (also on ESPN-NY). Per the scout:

“He was very serviceable. He made all the plays but one. He had a routine groundball go through his legs. But it was no big deal. He turned a couple of double plays. He moved to his left and his right. He moved better to the first base side, which would be to his left. And his throwing was good. It was accurate. His arm action is a little long from second. If he could tighten that up, it might serve him a little better. It’s almost like an outfield thrower’s arm. A catcher brings it up short and tight to his ear; you want to have a little shorter arm action. But he’s working hard.”

However, Rubin has also just reported that Murphy will need “five consecutive days resting” due to “tired legs” after playing in all 28 of his team’s games. That has me mildly concerned. Let’s hope he truly is fatigued and not suffering some kind of a relapse with his injured knee. I for one would like to see a Turner – Murphy battle at second base in the spring. 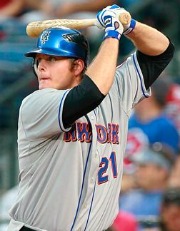 On the same day the Mets traded Jeff Francoeur, the Mets also announced the promotion of Lucas Duda, who jumped from AA to AAA and hit a combined .304 with a .398 OBP, .967 OPS, and 23 homers in 115 games. Big things were expected by big youngster from the Mets fanbase, who were yearning for homegrown talent at the tail end of yet another disappointing season.

At first, Duda struggled against MLB pitching – possibly due to nerves and/or becoming acquainted with big-league life – but was given the opportunity to settle in and he eventually adjusted, hitting .314 with a .345 OBP, .993 OPS, and 4 homers in his final 16 games / 55 plate appearances.

In the field, Duda looked a little awkward, but hustled like crazy, had no fear of walls, and got to the ball more times than not. His baserunning was similarly lumbering, but let’s face it – he won’t be in MLB for his footwork.

Overall, Duda gave the fans some hope that the Mets farm system was capable of producing big league talent. His tall, large-shouldered frame and clumsy athleticism reminded me a bit of Corey Hart or Hunter Pence, minus the foot speed. His bat – particularly in the last two weeks of the season – made me think momentarily of Adam Dunn. If Duda can fall anywhere within that range of ballplayers, the Mets and their fans will be happy indeed.

Some fans may be surprised to know that Lucas Duda will be 25 years old when spring training opens; many probably thought he was younger. At that age, the clock starts running quickly on players – it’s time to fulfill promise as a big leaguer. At 25, a player still has time to improve skills, but needs to already be showing at least one MLB skill. For Duda, that is his bat – how far he goes depends completely on his ability to hit the ball consistently and for long distances. His last 16 games of 2010 could be indicative of slugger ready to blossom; it could also be a tease (remember, Daniel Murphy looked like the next Pete Rose in his first 100 MLB at-bats). At this moment, the outfield appears to be too crowded to afford Duda the chance to prove himself, but anything can happen this winter. My guess is that if the Mets move Carlos Beltran and/or Angel Pagan to another club, Duda will be given every opportunity to win a job next spring.