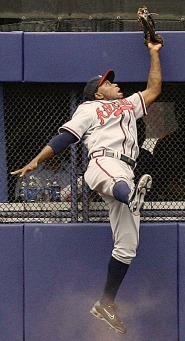 30 Days Until Pitchers and Catchers Report

It’s about one month before pitchers and catchers report, and it would seem that the Mets are still in the market for free agents to plug a few holes. Perhaps a reserve outfielder who can handle centerfield, for one (though they appear to have come to an agreement with the great Willie Harris), and hopefully a few more arms for the pitching staff.

Though, it’s possible the Mets don’t sign anyone of significance in the next 30 days, meaning there won’t be much to complain talk about. Let’s be serious — if the Mets “big” signings this winter are Ronny Paulino, Chris Capuano, D.J. Carrasco, and Boof Bonser, it’s unlikely they’ll acquire more exciting than that group in the final month before pitchers and catchers report. First, because there simply aren’t many interesting players available, and second, because Sandy Alderson has no threads left in his shoestring budget.

That said, what we’ll do from here on in is count down the days to spring training by remembering random players from the past who wore the uniform number of the current count. This idea was 100% inspired by reading the book Mets By The Numbers (as well as the MBTN website). So for example, today is 30, so we can remember Nolan Ryan, Mike Scott, Cliff Floyd, Dennis Ribant, Aaron Sele, or one of the many other once-Mets who wore uniform #30. But which one should we focus on?

Ryan and Scott represent painful memories — the two aces that “got away”. Granted, at the time he was dealt for Jim “friggin” Fregosi, Ryan had issues with blisters and bases on balls, the Mets were loaded with young pitching, but light on offense, so there was a tiny hint of logic in the move. Had Ryan stayed, the Mets’ rotation of Seaver, Koosman, Ryan, and Matlack would have compared to the 2011 Phillies’ — but for all we know, it would have simply resulted in more 2-1 losses and the same amount of third-place finishes; their offense was THAT bad.

Scott stunk as a Met — he was so bad, getting Danny Heep in return seemed like a steal. It wasn’t until Roger Craig taught Scott how to scuff the ball for more movement throw a split-fingered fastball that he became dominant.

Aaron Sele holds a special place in the Mets bullpen; for all we know, he’s still sitting down there, right now, playing cards and waiting for Willie Randolph to call him into a game.

Ribant might be a good player to focus on, since he was the very first Mets starter to finish a season with a winning record (11-9 in 1966). Such a feat represents hope.

And it is spring training that hopes eternal … er … or something, right? So for me, the perfect former #30 to focus on right now is

What I’m Reading: Mets By The Numbers

As mentioned a few weeks ago, the winter (a.k.a., “not the baseball season”) is unbearably long for me. In an effort to fill the hole where baseball usually is, I’ve immersed myself in reading about baseball.

This week, I’m reading Mets by the Numbers: A Complete Team History of the Amazin’ Mets by Uniform Number

, a wonderful book by Jon Springer and Matt Silverman — who, not coincidentally, also run the Mets By The Numbers website.

Each chapter of the book is devoted to a specific uniform number, headlined by the Met who is most memorable for wearing that number, and also detailing other notable players who wore it. For me, it brings back plenty of vivid memories. Also, since I’m someone who has a hard time reading a book straight through, I especially like the fact that I can jump in anywhere in the book and read a chapter.