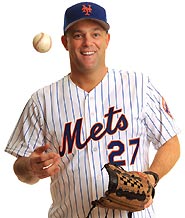 But wait, this post is supposed to be about Pete Harnisch — and I’m sure you’re on the edge of your seat wondering why in the world I’d choose the pitching version of Richie Hebner.

I know, I’m about two days late on this. But hey, I’ve been busy … there’s this “full-time job” thing that gets in the way of my blogging. And if it weren’t for the damn bills that keep coming in every month …

Anyway, that’s my problem, not yours. And speaking of problems, Chris Young is now the Mets’ problem.

Oh jeez, sorry to burst your bubble. I’m sure there’s a chance that Young comes back from his latest shoulder injury and pitches well — I’m just not counting on it. Certainly, he’s more worth a $1.5M gamble than Kelvim Escobar was, but that’s not saying much, is it?

I would really, really like to see Chris Young come all the way back and be the pitcher he was in 2007. I’ve always liked Chris Young, perhaps because he pitched at Princeton so he “feels” like a local kid … and so him becoming a Met is sort of a “coming home” — even if he is a native of Dallas, Texas. So I am rooting for him — but holding zero expectations due to his chronic injury history. Expect nothing, and you won’t be disappointed … but you could be wildly surprised. And for someone who has made only 36 starts in 3 years, suffering through myriad shoulder and back issues, I think it’s fair and prudent to have low expectations.

What I like about this signing is that it’s already supported with a backup plan. The previous front office would have signed Young as the main addition to the pitching staff, penciled him in to the #3 or #4 slot, and rubbed rosary beads together while saying a hail mary in the hopes that he’d make 30 starts. In contrast, the Fantasy Front Office has a backup plan of Chris Capuano, Boof Bonser, Dillon Gee, and D.J. Carrasco in the event Young falters. If Omar Minaya were still in charge, the backup plan would have been El Duque, Tony Armas, Jr., or Bartolo Colon — and you know I’m not joking when I say that.

By the way, I noticed there is a slo-mo video of Young’s mechanics posted on youTube — spotted via MetsBlog via MetsFever. When I get some time later this week / this coming weekend I’ll break it down and explain all the elements of his style that you should not be teaching youngsters.

In the meantime, post your comments on Chris Young. What are your expectations, if any? Why are you counting on him or not counting on him to be a reliable member of the starting rotation? What do you think is his ceiling — and basement — for 2011? Do you think it was a smart signing, and why or why not? (For the record, I think it was a very good signing; $1.5M guaranteed is a drop in the bucket these days and there is a possibility he can be a solid #4 through 15-25 starts, which to me is well worth the cost.)