As reported on The New York Times:

Darryl Strawberry said the Mets should have hired Wally Backman as manager instead of Terry Collins. Mr. Strawberry played with Mr. Backman on the Mets’ 1986 championship team. “Wally will be the next manager of the Mets,” Mr. Strawberry said Tuesday. “I thought he would have been the right choice for them at this point.”

If the Mets perform as poorly as expected — i.e., not be in the running for a playoff spot — how many more times are we going to see news like this? In other words, will Terry Collins be constantly looking over his shoulder, and/or have his job publicly debated?

Loyal readers of MetsToday know that I supported Backman for manager. However, in a way I’m glad he didn’t get the job now, considering the uphill (and downhill) battle that appears ahead. With the tight budget of this year, the expected turnover / overhaul of the roster next year, and lack of young talent to count on going forward, the next 2 years are going to be difficult. And when things don’t go well, someone has to take the blame — deserved or not. What Terry Collins has ahead of him in regard to the court of public opinion is no cakewalk. 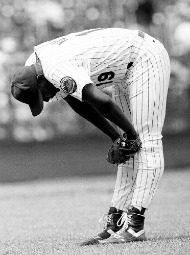