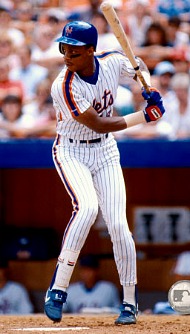 You were expecting Jeff McKnight, weren’t you?

I will admit, though, there was a nanosecond where I considered honoring Joel Youngblood for the 18th Day Until Pitchers And Catchers Report. But really, there was never a question, for so many reasons.

It goes back to being a Mets fan in the late 1970s to early 1980s — a dark, ugly time for the franchise (particularly after they traded The Franchise). The team was bad. The future looked bleak. The original owners sold the club to a book publisher and a real estate magnate, but it was hard to see how that was going to help. Despite the incessant commercials produced by the high-priced, well-intentioned ad agency, the “magic” most certainly was NOT back. The situation seemed hopeless — until June 1980, when