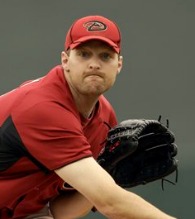 From the “Where They Are Now” file …

After spending 2010 in Arizona’s bullpen, Aaron Heilman finally became a free agent and embarked on finding a team that would give him a chance to be a starter.

Heilman spent the entire winter evaluating the offers of various suitors, and wound up right back in Arizona — where the Diamondbacks are giving him a legitimate shot at a rotation spot.

If you are a longtime, loyal reader of MetsToday then you know my feelings regarding Heilman as a starting pitcher. If you’re not familiar with my stance, check out the links in my argument earlier this winter to consider him as a candidate for the Mets rotation.

Though the D-Backs have promised Heilman a legit shot at starting, and both manager Kirk Gibson and GM Kevin Towers insist that the winners of the last two starting spots will not be affected by contracts and their associated finances, it would seem that Heilman has an uphill battle. He is one of three candidates for the two open spots, in competition with lefty Zach Duke — who has a one-year, $4.25M guaranteed contract — and Armando Galarraga, the nearly-no-hit artist who has a $2.3M deal. Youngster Barry Enright — who was 6-7 with a 3.91 ERA in 17 starts last year — also is in the running.

According to reports from the Cactus League, Heilman impressed in his first outing of the spring. We’ll see what happens over the next four weeks.

Any hope of getting through an entire week without mentioning a financial issue ended quickly when on Tuesday it was reported that the Mets were seeking another loan to cover basic operating expenses — and that MLB was pressuring JP Morgan to give the team a line of credit. If that wasn’t bad enough, later on Tuesday evening The New York Times had two sources confirm that MLB would no longer infuse the Mets with money — thereby explaining Bud Selig’s pressure on JP Morgan.

“It’s tapped out,” one of the people briefed on the situation said, referring to the availability of more money.

But here’s the really scary part: this issue of not having enough money to run their business from month to month began BEFORE the billion-dollar lawsuit was filed by Irving Picard in December.

But the Mets appear to be under significant financial duress independent of the lawsuit. The $25 million loan, which was made after the Mets had already used up an M.L.B.-sponsored line of credit worth tens of millions of dollars, was extended to the Mets before the lawsuit was filed. Some in the industry see the loan as an indication that because of their heavy indebtedness, they are no longer able to borrow substantially from traditional commercial lending institutions.

I know, I know … we should be talking about the action on the field, not the off-field issues. But with Luis Castillo currently leading the battle for second base, I figured you’d prefer less depressing news related to the Mets.