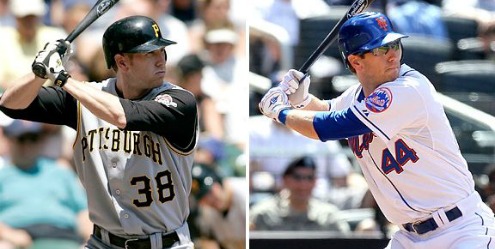 With 18 days until pitchers and Molinas report to spring training, let’s focus on question #18 facing the Mets: what batting stance will Jason Bay employ, and will it be conducive to improved performance?

If you remember, Bay’s entrance music should have been the song made famous by Wilson Pickett (or Ted Nugent, depending on your age), as Bay became “The Man of 1,000 Stances”. There was the “worm beater” stance he displayed in early March, followed by the “Jam On It” method used a week later, and then the “hidden dragon, crouching tiger” version sported by St. Paddy’s Day … to describe but a few.

The variations continued during the regular season, as Bay seemed to enter his own personal laboratory every time he came to the plate, experimenting with bat angles, foot placement, and strides like a mad scientist (visions of Gene Wilder as Young Frankenstein come to mind). It’s hard enough to hit the most hellacious stuff on the planet offered by MLB pitchers; it becomes next to impossible when the mind is thinking about hand and foot positioning.

Perhaps related to his inconsistent setup and approach, Bay perpetually looked uncomfortable and lacked confidence through much of 2011 — and his numbers reflected it. So the big question for Bay in 2012 is, will he find a comfortable and effective stance this spring, will he stick with it, and will it help him return to being the feared middle-of-the-order slugger that earned him a $66M payday a few years ago? A positive answer will go a long way toward whether the Mets will be able to dump him in July score enough runs to stay out of the NL East basement.