The passing of Gary Carter is a blow to anyone that followed the Mets in the mid-1980’s. About 24 hours after first hearing the news and after watching a tribute to Gary on The Baseball Network, I have developed the sense that Carter is/was probably the greatest Met we’ve ever underappreciated.

It could be that his career at Shea was relatively short, full seasons from 1985 thru 1988 with a 50-game 1989 finale due to injuries. He hit a combined 16 homeruns in 1988-89. It could be that he essentially dropped off the team’s radar after he retired. Other 1986 Mets including Darryl Strawberry, Ron Darling, Keith Hernandez, Bob Ojeda, Howard Johnson, Wally Backman, Mookie Wilson and even Tim Tuefel returned to the fold after their playing careers ended, while Dwight Gooden and Lenny Dykstra have maintained notoriety for different reasons. Maybe it’s the fact that he entered the Hall of Fame as a Montreal Expo. It could be his unabashed Christian faith. I remember his interview after Game 7 in 1986 when he thanked Jesus Christ, a remark which elicited an internal groan in my then 26-year old mind. (Life experiences have changed my opinions on that!) He seemed strangely out of place on a team of hard living hell raisers and his beliefs made him seem more seem more suited for a role in Bible-Belt city rather than in New York.

Often when people pass, it’s a time for the rest of us to put things in perspective. His teammates have been effusive in their praise for his role on the 1986 squad. While short, his Met career was very significant and I best believe can be put in perspective with just four words:

The Mets are down to their last out and on the verge of one of the largest letdowns in baseball history at the hands of the Boston Red Sox. Gooden, having melted down in Game Five is in the dugout, unavailable. Strawberry, removed as part of a double switch earlier in the game, sulks in somewhere in the shadows. Hernandez has just flied out to deep center. That leaves Carter. Refusing to make the last out, he wills a single and then, pushed by hits from Kevin Mitchell and Ray Knight, chugs around the bases, pointing prophetically at Wilson while crossing the plate. Was it Divine Intervention that saved the Mets that night? (It certainly was a miracle). Carter’s refusal to give up, his heart of a champion, kept the Mets heart beating that inning and eventually carried them to the pennant.

I was a season ticket holder in 1989. Towards the end of that dismal season, I was struck with the realization that soon Carter would no longer be a Met. I will never forget soaking in those final appearances of his from my seat in deep left field: his stance was a near perfect replica of the MLB logo, the number 8 centered down his back and his bat held the anticipation that a ball may be hit a long way at any moment. Aside from that somewhat personal moment, there are some other highlights to consider.

• His game-winning 1985 Opening Day home run off of Neil Allen in the bottom of the 10th inning.

• His game-winning NLDS Game Five hit off of Charlie Kerfield

Very few players have those types of highlights on their Met resumes. For those reasons alone, I hope the Mets do the right thing and retire Carter’s number this summer (it might be a good idea to also retire #17 at the same time).

Godspeed and thank you, Gary. May the faith you readily shared with everyone be a comfort to those who mourn you here and may you enjoy eternity as a heavenly all-star.
Let’s Go Mets! 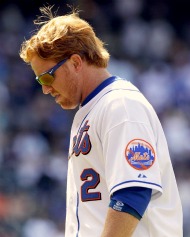