Recent history suggests this week is crucial for Mets 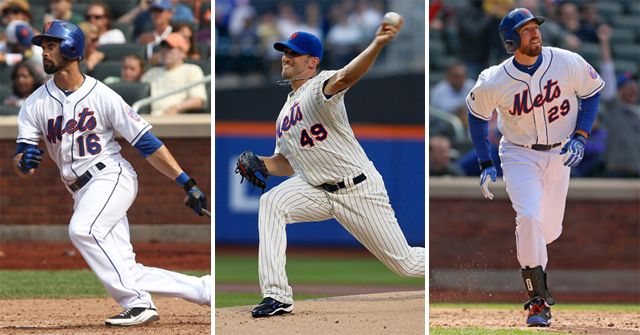 Through 90 games, the offense offered a lot to like: Jose Reyes leading off, David Wright having regained his power stroke, hotshot rookie Ike Davis impressing at the plate and in the field, and Angel Pagan seemingly coming into his own at age 28. On the mound, Johan Santana was still more or less Johan Santana, a new splitter had suddenly made Mike Pelfrey great again, 23-year-old lefty Jon Niese was more than holding his own, and R.A. Dickey was a revelation. Francisco Rodriguez was closing out wins, Pedro Feliciano was retiring a lefty or two every single day, and Hisanori Takahashi was the best swing man in the league.

Over the next 10 games, they went 3-7, effectively ending their playoff hopes, and beginning a spiral down below .500.

Carlos Beltran came off the DL but couldn’t play defense, Pagan shifted over to RF, hurting the team defensively at two positions, and neither guy hit down the stretch. Santana tired, K-Rod punched his father-in-law, Reyes pulled an oblique, and it was a sad September in Queens.

Through 90 games, they were clutching out, keeping postseason hopes alive despite an underwhelming roster. With Santana and Ike Davis injured and Wright playing poorly through pain, the Mets nevertheless managed to string their hits together, taking quality AB after quality AB in big spots. They scored runs despite mediocre batting stats, and many were praising Dave Hudgens as a genius. With Jose Reyes putting up an MVP-type year, Lucas Duda getting a full-time job after crushing AAA Buffalo with a 1.011 OPS, and three apparent breakouts in progress (Bobby Parnell, Ruben Tejada, Daniel Murphy), the Mets had hope that if their starting pitching could just perform to their abilities, they’d have a chance.

Over the next 10 games, they went 4-6, effectively ending their playoff hopes, and beginning a spiral down below .500.

A 4-6 stretch is hardly ever the end of the world, but 50-50 is too mediocre a record too late in the season to come back from. Especially when none of the starters turn it around, Wright doesn’t heal, Parnell regresses, Murphy gets hurt, and Duda can’t play RF.

Through 90 games, Wright was raking, Scott Hairston was raking, Dickey was throwing one-hitters, Ike Davis was on his way back after finding himself in the minors, and a finally-healthy Murphy was still teasing us with .300 promise. The futures of Kirk Nieuwenhuis and Ruben Tejada still looked promising, and there was Matt Harvey to look forward to. Optimism abounded for how the second half would be better than the first.

Over the next 10 games, they went 2-8, effectively ending their playoff hopes, and beginning a spiral down below .500.

Wright couldn’t keep it up. Tejada and Murphy and Captain Kirk didn’t live up to the big expectations. Dickey willed himself to 20 wins, and Ike and Harvey put up numbers, but it wasn’t nearly enough.

Through 90 games, there have been ups and downs. There have been great performances and disappointments. There is a lot of hope for a playoff run, but much of it rests on things improving — hurt players getting healthy, slumping players turning it around, hyped players living up to the hype. I’m finding it uncomfortably familiar.

Over the next 10 games, what will they do (so far they’re 2-2)? The answer may well decide their season. This upcoming series against the Marlins is big.

What will give the 2016 Mets the best chance to finish strong? If history is any guide, juggling outfielders and betting on improved health is not it.