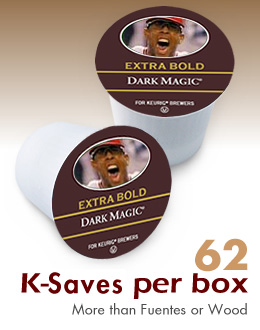 For me, the greatest invention of the 21st century is the Keurig K-Cup.

Similarly, the greatest acquisition by the Mets this winter is K-Rod.

In my mind, K-Rod and K-Cups are a marketing match made in heaven. The “Dark Magic Extra Bold” is a fitting flavor, dontcha think?

After all, he’s “extra bold”, has “magic” stuff, and has intensity to match the flavor of this particular coffee. Lucky for him, too, because those are exactly the traits needed to close in New York.

Hey, if Reggie Jackson could have a candy bar, why can’t Francisco Rodriguez have a coffee named after him?

Frankie — you get to Flushing to make it all official with the Mets, and I’ll get on the horn with Green Mountain. Deal?