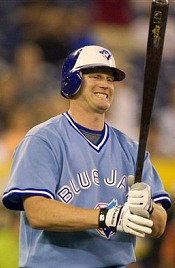 The three-team possibility, according to one source, has “some legs, but not much.” The Jays are opposed to the deal, one source says — perhaps because new GM Alex Anthopolous does not want a trade for Bradley to be his first major move.

If such a deal did happen, Overbay would presumably take over at 1B, Dan Murphy would go to the bench, and a hole would be created at second base. The next popular move would be to sign Orlando Hudson to fill in the vacancy at 2B. This would definitely create a different look on the right side of the Mets’ infield — but is “different” necessarily “better”?

Personally, I like Hudson’s energy, attitude, and leadership skills — in regard to intangibles, I see him as an upgrade over Castillo. But the statheads will point out that, like Castillo, his glove is no longer gold — though, it is still better than what we saw from Luis this past season. Let’s look at the 2009 offensive comparison:

As you can see, Castillo had the edge in OBP and steals, while Hudson had more power. You may also point out that Hudson had 22 more RBI, but — ironically — he drove in exactly 22 runs while hitting in the #3 spot in the lineup, while Castillo spent most of his season hitting #2, #8, #9, or leadoff. It could be argued that if Castillo had the opportunity to bat third in the lineup 40 times, he may also have had an extra 20 or so RBI — especially since he hit .325 with RISP (Hudson hit .264 with RISP).

Don’t get me wrong — I’m not necessarily making a case for Castillo. Given a choice, I’d prefer Hudson. But don’t get the idea that Hudson is a remarkable upgrade — especially if he will be spending most of his time in the second spot in the lineup, where OBP and taking pitches has more value than in other spots. In addition, chances are that Hudson will cost about as much as Castillo over the next two years. Most likely, his price will go up if the Mets have a big gaping hole at 2B.

As far as Overbay, he probably will be an upgrade over Murphy at 1B. But again, how much? There was a point in Overbay’s career when he appeared to be on the verge of All-Star status — ironically, that time coincided with the signing of a 4-year, $24M contract. He was locked up with that deal immediately after a season in which he hit .313 with 22 HR and 92-RBI. What was glazed over was the fact he was 29 years old during that career year — an age when many, many players reach their peak. His numbers have slid ever since, particularly in regard to power — his 16 HR last year were the most he’s hit since 2006.

Our favorite stathead Matt Himelfarb recently wrote an intriguing article suggesting an Overbay – Nick Evans platoon. Considering the sudden souring on Evans within the organization, that’s an unlikely scenario, but Matt does bring up good points about Overbay — namely, his ability to terrorize righthanded pitching. He also has been consistent in his ability to get on base, posting .372 and .358 OBPs the last two years. But, the Dan Murphy supporters believe that Murphy will revert to being a better on-base guy, and if that’s true, he and Overbay would be pretty much the same player (though Overbay would probably look a bit smoother on defense).

In the end, such a trade (and signing) would result in new faces, more money spent, but similar on-field results. However, many would argue, the Mets are in need of a change for the sake of change and nothing further.